All ten Vitality Netball Superleague sides are being represented at the Vitality Netball World Cup in Liverpool this summer. Uganda She Cranes and Scottish Thistles meet on Sunday 14 July when the crowd will be treated to 12 of the Superleague’s finest talents.

Uganda She Cranes have improved exponentially in recent times, rising from 17th in the INF World Rankings to seventh in just under four years. The She Cranes made their World Cup debut in 1979, finishing joint-13th with St Lucia, and recently enjoyed their highest-ever finish of eighth in 2015. They are one of four African teams to play at this year’s World Cup.

Scotland have also consistently appeared on netball’s biggest stage, qualifying for 13 editions of the World Cup since the tournament’s inception in 1963. They are one of just seven nations to have hosted the competition, in 1987, but their greatest result remains their trio of third-place finishes in 1971, 1975 and 1983 respectively.

Mary Cholhok became the second Ugandan to turn out for Loughborough Lightning after international teammate Peace Proscovua when she signed for the Midlands outfit last year. The 6’7 goal shooter has since made an impression on court thanks to her evident shooting prowess, winning the Gilbert Golden Shot Award.

Wing attack and centre Kelly Boyle will make her World Cup debut in Liverpool this summer after some promising performances for Strathclyde Sirens. The 21-year-old will be looking to make her mark in an impressive Scotland squad.

Another of the 11 Strathclyde Sirens representing Scottish Thistles on the world stage, Lynsey Gallagher is a talented and experienced attacker. At 27, Gallagher has collected 81 caps for her country and has previously represented the Thistles at the World Cup in 2015.

This will be Ella Gibbons’ first experience of a World Cup. At 6’3, the 24-year-old stands as goal defence and goal keeper for Strathclyde Sirens during the Vitality Netball Superleague season.

Bethan Goodwin has just finished her third season in the Superleague and the youngster has already enjoyed an impressive start to her promising club career. As a result, Goodwin is beginning to transfer her Sirens performances onto the international stage. The goal shooter will be 20 by the time the World Cup begins but she has already amassed 19 caps for her country.

Playmaker Claire Maxwell will captain the Thistles in Liverpool and will also secure a coveted century of caps during the opening stages of the competition. The pacey centre and wing defence started playing at primary school and has gone onto captain her country as well as Strathclyde Sirens.

Another of Scottish Thistles’ young squad, teenager Niamh McCall has come into the Sirens side and has made her mark at goal attack. The 19-year-old got into netball at primary school just a decade ago and will now be competing at the highest level of the sport. 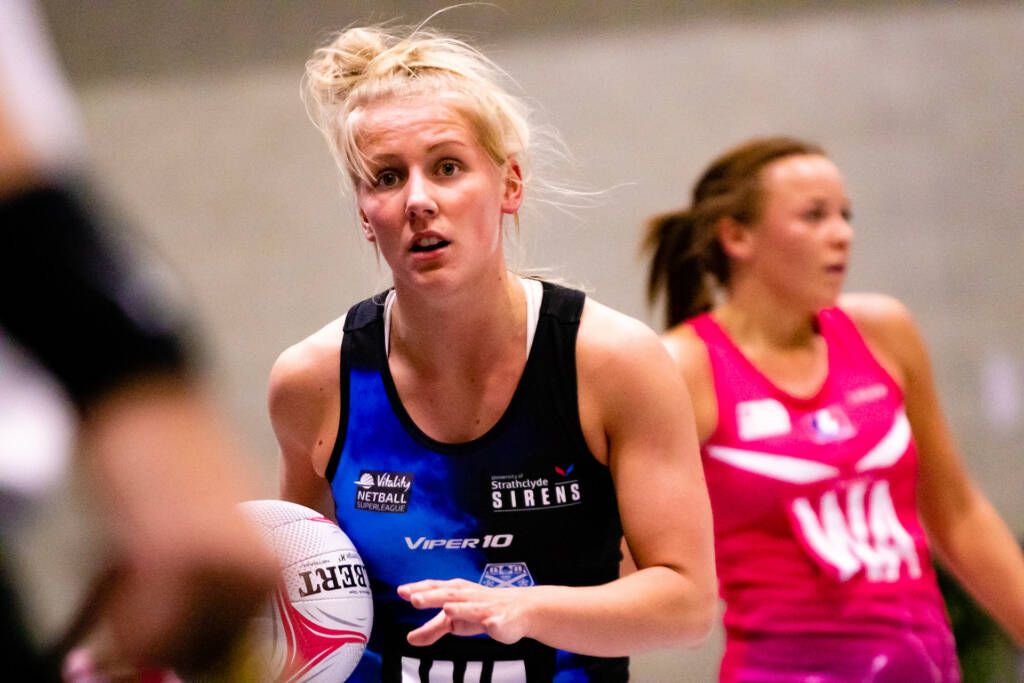 Goal keeper and Scottish Thistles centurion, Hayley Mulheron has been a key figure for her country for several years. A talented sportswoman, Mulheron has surpassed 100 caps for her country and is instrumental for Sirens during the Superleague season. The 33-year-old played at the 2007 and 2015 editions of the World Cup.

Emily Nicholl’s sister originally inspired her to take up netball and the goal defence will be glad that she did. Nicholl has represented Scotland on 15 occasions and regularly takes to the court for Sirens during the league season.

When Uganda She Cranes competed in their inaugural Commonwealth Games last year, they took on Scottish Thistles for the first time in recent history. Vincent Kiwanuka’s team ran out 57-37 winners.

In the Superleague, Mary Cholhok’s Loughborough Lightning twice faced Scottish Thistles and twice came out on top. Cholhok produced a Player of the Match performance in the 60-49 victory in February and, in the 59-44 win later in the season, the Ugandan flourished again.