Katy Hughes announced her retirement earlier this month after more than a decade playing in the duck egg blue of Surrey Storm.

In fact, Hughes was a rarity in that she spent the entirety of their professional career at one Vitality Netball Superleague side.

We take a look at just five one-club VNSL stars who notably dedicated their playing days solely to one Superleague team.

Katy Hughes epitomises a one-club player. After graduating from Surrey Storm’s NPL side as a youngster, she spent her entire professional career wearing the famous duck egg blue dress.

The defender, 29, has been an ever-present for Storm since the start of the previous decade right up until the premature end of the 2020 campaign. In 2018, she was made captain of her club.

Hughes was an instrumental part of Storm’s most successful period between 2014 and 2016 when they won two Vitality Netball Superleague titles.

An ever-present member of the Storm side for over a decade, Katy will be deeply missed by everyone 🙌🏼

Forming a formidable partnership with Hannah Knights, Storm’s defensive prowess helped them on their way to becoming just the second team to win back-to-back titles in 2015 and 2016 respectively.

After many of their top players left for the following season, Hughes was one of a handful that remained at Surrey Sports Park and did so until her retirement during the off-season in 2020.

Before she was Vitality Roses head coach, Jess Thirlby was best known for her era-defining spell with Team Bath Netball in the Superleague.

Thirlby was the very first player approached to join the full-time programme at Team Bath in 1999 and she went onto spend her whole playing career in Bath.

A staple of the team before the inception of the VNSL, Thirlby went onto win the first Superleague title in 2006 before turning her attentions fully to coaching by the start of the following season.

After a year-long spell as coach at Celtic Dragons, Thirlby fittingly returned to Team Bath and helped lead her club to further Vitality Netball Superleague glory on four occasions.

Emma Dovey has been a stalwart of Manchester Thunder for many years now and has been influential in the team’s success in recent years.

The defender has played for Thunder for the entire 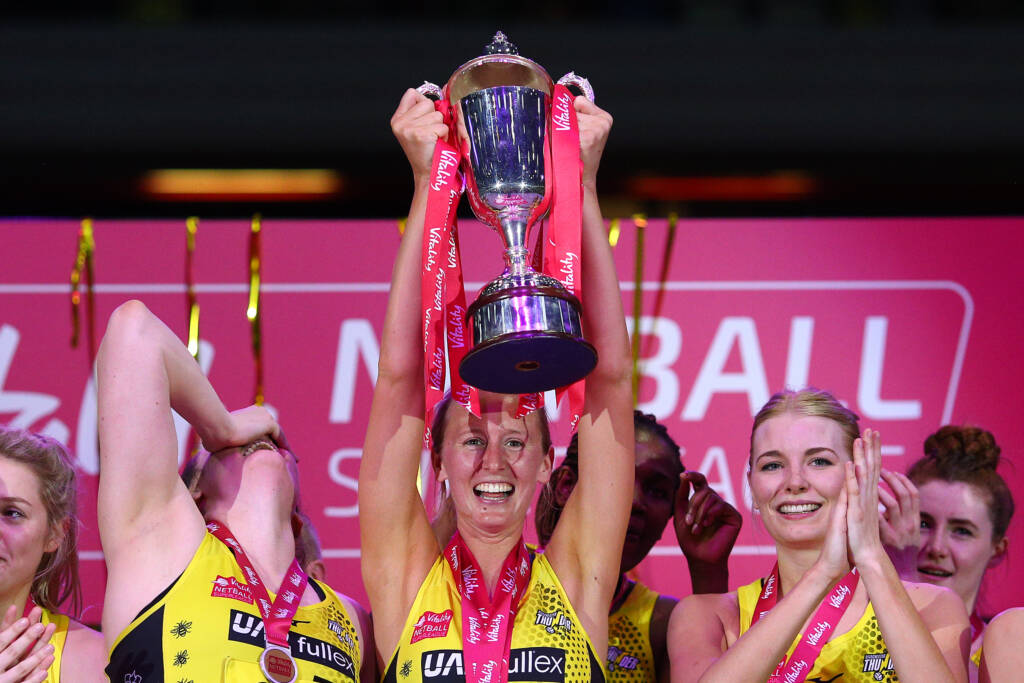 ty of her senior career and took over from Sara Bayman as club captain in 2016.

After heartbreak in 2016, the Lancashire-born player led her teammates to VNSL glory in 2019 when they defeated Wasps Netball in the Grand Final.

Following the retirement of Kerry Almond in 2019, Dovey is one of the most experienced players in the Thunder squad despite still being only 28.

Dovey played a key role in Thunder’s promising start to the short-lived 2020 campaign and will likely do the same in 2021.

Louisa Brownfield’s name will forever go down in history thanks to her exploits in Vitality Netball Superleague Grand Finals.

The goal shooter scored the first three goals in Grand Final history in 2006 when she faced Team Bath with Saracens Mavericks.

In the black of Mavericks, she played in six successive Grand Finals between 2007 – 2011 and appeared in her seventh final against Surrey Storm in 2015.

The former England international won her first title in 2008 before going onto win the trophy for the second time in 2011 as captain of her club. Of these seven matches, she was top scorer in three.

Loughborough Lightning have been part of the Superleague furniture since the start of its debut season in 2005. For more than half of their tenure in the VNSL, they have had Hannah Joseph in their squad.

Joseph joined Lightning in 2011 to combine her training with her study at Loughborough University and quickly cemented herself in the side.

Despite being a young player herself, the former England international proved to be a leader in an inexperienced side and was to a vital cog in the team that reached successive Grand Finals.

The 2020 campaign was her eighth consecutive season in a purple dress and, as explained on Superleague Social, the wing attack is hoping for an injury-free year in 2021.

There are, of course, many one-club players still plying their trade in the Superleague such as Mia Ritchie of Team Bath and Suzy Drane of Celtic Dragons. Let us know who your favourite one-club player is!