Manchester Thunder have announced that they have retained the services of highly-rated Northern Ireland international Caroline O’Hanlon for the 2021 Vitality Netball Superleague season.

Following the news, here are five things to know about the mid-court star.

Dr O’Hanlon will see you now…

As well as putting in Player of the Month performances during a regular VNSL season, Caroline O’Hanlon also works full-time as a doctor.

She is a General Practitioner in Newry, her place of birth, and has been helping fight the Covid-19 pandemic on the frontline in her native Northern Ireland.

The game is this – slow the spread of the virus. #ItsInOurHands
GP Caroline O'Hanlon @ArmaghLGFA calls on you to play your part and follow @HSELive guidelines. @WomensGPA pic.twitter.com/nVAdL3Wwqz

The 36-year-old usually works a three-day week and commutes between home soil and England to play Superleague matches.

O’Hanlon has stated that the high-stakes nature of both her sporting life and professional life allows her to focus on one thing at a time.

Good with her feet, too

If she wasn’t busy enough juggling her netball and medical responsibilities, she also manages to play at the top level of another sport.

O’Hanlon also plays Gaelic football at the highest level. She has been playing inter-county for nearly two decades for Armagh and she also represents St Patrick’s Carrickcruppen at club level.

This dual-sportswoman has enjoyed much team and individual success in this sport, too. She captained St Pat’s to a Division 2 title in 2015, captained Armagh to an Ulster title in 2014, and played for Armagh in the 2006 All-Ireland Senior Ladies’ Football Championship Final against Cork.

Individually, O’Hanlon was selected as an All Star in 2006, 2012 and 2014. Her exploits on the netball court and football field meant she won Northern Ireland Sportswoman of the Year in 2010.

Her Sportswoman of the Year award came almost a decade ago and, as a 26-year-old junior doctor, O’Hanlon had already achieved so much on the international stage. She has since achieved even more.

O’Hanlon has represented Northern Ireland at three Netball World Cups including the latest edition in Liverpool last year, where she captained the side to a tenth-place finish.

She has also donned the green dress at the 2014 and 2018 Commonwealth Games – where she was a flag bearer during the opening ceremony – and won silver medals at the 2012 and 2017 European Netball Championships.

The centre has also won silverware for her country in the form of two of Netball Singapore’s Nations Cups. She won the tournament in 2009 and 2015, winning Player of the Tournament in the latter.

O’Hanlon first joined the Vitality Netball Superleague in 2014 with Team Northumbria but has also won titles across the Irish Sea. 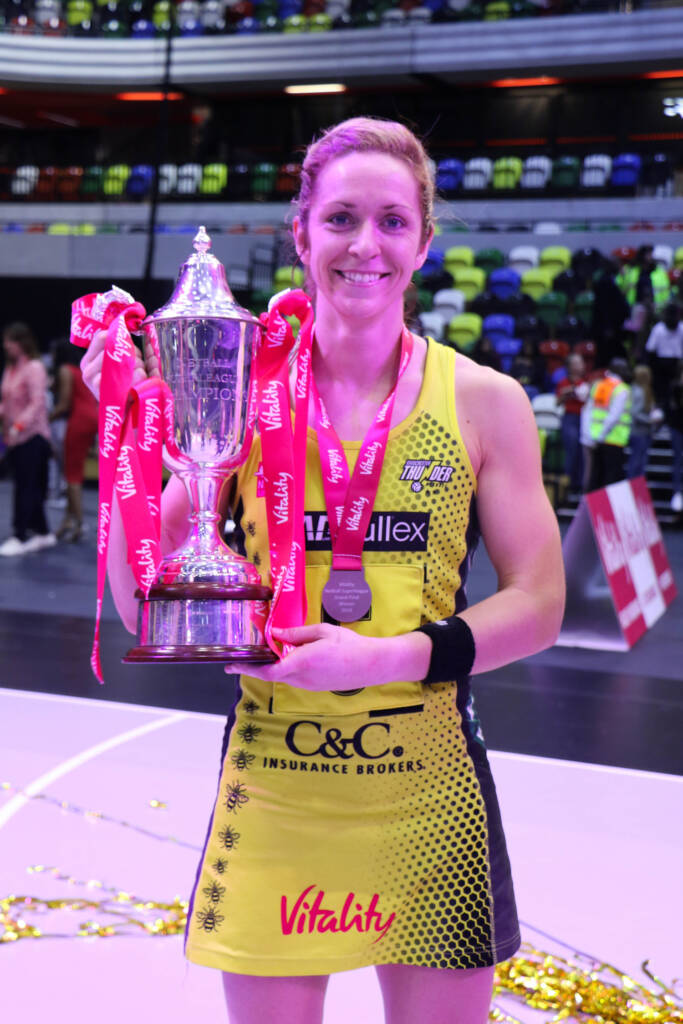 Having never finished above sixth for Team Northumbria and Strathclyde Sirens, she joined Manchester Thunder in 2018.

The club finished in the play-offs that year but went one better 12 months later, going onto win the title in a dramatic Grand Final against Wasps Netball. The experienced O’Hanlon got her hands on the trophy and played a vital part in the success.

O’Hanlon is one of many Northern Ireland nationals to ply their trade in the Superleague over the years including eight of the 2019 Vitality Netball World Cup squad.

In 2014, the Northern Ireland team formed a partnership with Team Northumbria which meant several internationals played for the club that season. O’Hanlon was joined by six other Northern Irishwomen in the squad.