The Vitality Roses claimed their first victory of 2021 on Wednesday night with a 70-54 victory over the international Vitality Netball Superleague All Stars.

After pulling out all the stops behind the scenes, England Netball brought live netball back to our screens with the return of the Vitality Netball Legends Series.

Unfortunate restrictions saw original opposition Jamaica unable to travel, however they were soon replaced with brand new side made up of international superstars from the Vitality Netball Superleague (VNSL).

As the first whistle sounded, both teams shot off the blocks and were eager to put the first goals on the board. With the All Stars side featuring a mix of nationalities and therefore a mix of styles, the opposition took the early lead as the Vitality Roses slowly settled into the mix.

Increasing the physicality, the All Stars kept hold of their lead for the first few minutes of the match but the Vitality Roses soon pushed past and began to build.

With cool and calm long bombs from a returning Helen Housby, mixed together with simple errors from the All Stars, the Vitality Roses opened up the space they needed to extend their lead.

A long pass from Nat Panagarry to Joyce Mvula saw the ball sink through the net on the buzzer but, with no goal allowed, it was England that finished the quarter with a three-goal lead.

Eager to close the gap, the All Star side returned to court with fire in their bellies. Severn Stars and New Zealand stalwart Liana Leota resumed her former partnership with Mvula, sending no-look passes straight into the circle.

Down in the Vitality Roses attacking end, Nat Haythornthwaite and Housby also made the most of their famous partnership, using Fisher’s wide reach to continue adding points to the board and maintain their lead.

The second half got underway with the return of Commonwealth Gold medallist Beth Cobden who took to court for the first time in over two years, having previously suffered back-to-back ACL injuries.

Thunder teammates Eleanor Cardwell and Laura Malcom also stepped onto court, adding a new dimension to England’s attack. Young gun Sophie Drakeford-Lewis took on the goal attack position as Razia Quashie increased the pressure in the defensive end to turn the ball and deliver it back down court.

Despite numerous changes to both sides throughout the third quarter, the Vitality Roses continued with their campaign and went into the final fifteen minutes with a 16-point lead.

Eager to shut down the prowess of Mvula in the shooting circle, 2019 Vitality World Cup bronze medallist Fran Williams took on the challenge in the final quarter whilst All Star Summer Artman showcased her talents for the opposition, teaming up with Loughborough Lightning’s Sam May.

With just six minutes left in the match, Wasps Netball’s goal attack Gezelle Allison took to the bench after displaying an outstanding level of calmness having sunk long bomb after long bomb throughout the duration of the game. 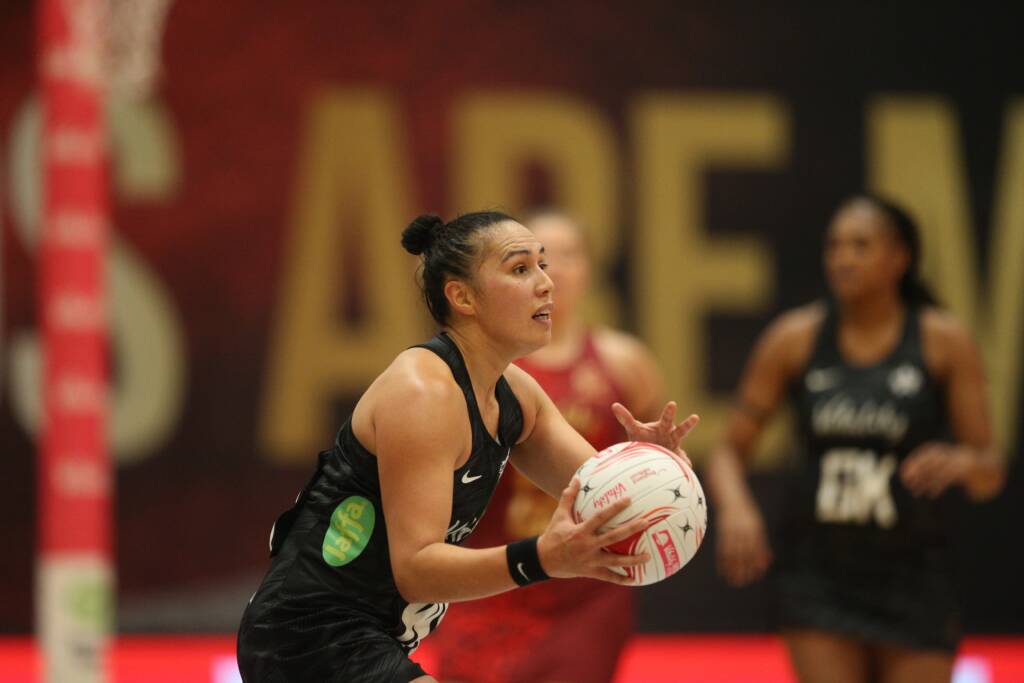 Liana Leota was in impressive form for the Vitality Netball Superleague All Stars.

Meanwhile, Vitality Roses co-captain Serena Guthrie returned to guide her side home. Keeping the ball safe in the final moments of the game, England saw out the pressure to claim a 70-54 victory over the All Star side.

Successfully wreaking havoc to the tried and tested through court experience of Thunder’s O’Hanlon, Leota and Mvula, Quashie’s stellar performance saw her named Player of the Match in the opening match of the series.

The two sides return to court on Friday evening for the second match in the three-match series. Don’t miss all the action on Sky Sports from 5.45pm.

A huge thank you to everyone for making the Vitality Netball Legends Series happen and the continued support from all of our partners during these challenging times.