Niamh McCall was one of the stars of the Vitality Netball Superleague Season Opener and she believes her Strathclyde Sirens campaign will be vital to Scotland unlocking a Netball World Cup berth later this year.

After starting the season with a battling defeat to Team Bath on Saturday, a superb victory over Wasps followed on Sunday.

Now the Strathhaven-born star and her Sirens team-mates are set to return to the Emirates Arena and a crowd for the first time in two years when they host Leeds Rhinos on Friday night – tickets are still available here.

“I’m so excited to get back in front of a home crowd,” said McCall.

“The Sirens Tribe have stuck with us through closed doors and supported us all the way, and I can’t thank them enough for that.

“Scotland crowds are always the loudest. That’s why we love them, that’s why we want home games.

“So to go out and show them what we’ve been working on this season, and just prove to them that we can win those tough games and make them proud. I can’t wait.”

McCall and Beth Goodwin linked up to great effect last season and against over the opening weekend, while teenage shooter Emma Barrie is also part of the squad that spent time with Scottish Thistles head coach Tamsin Greenway. 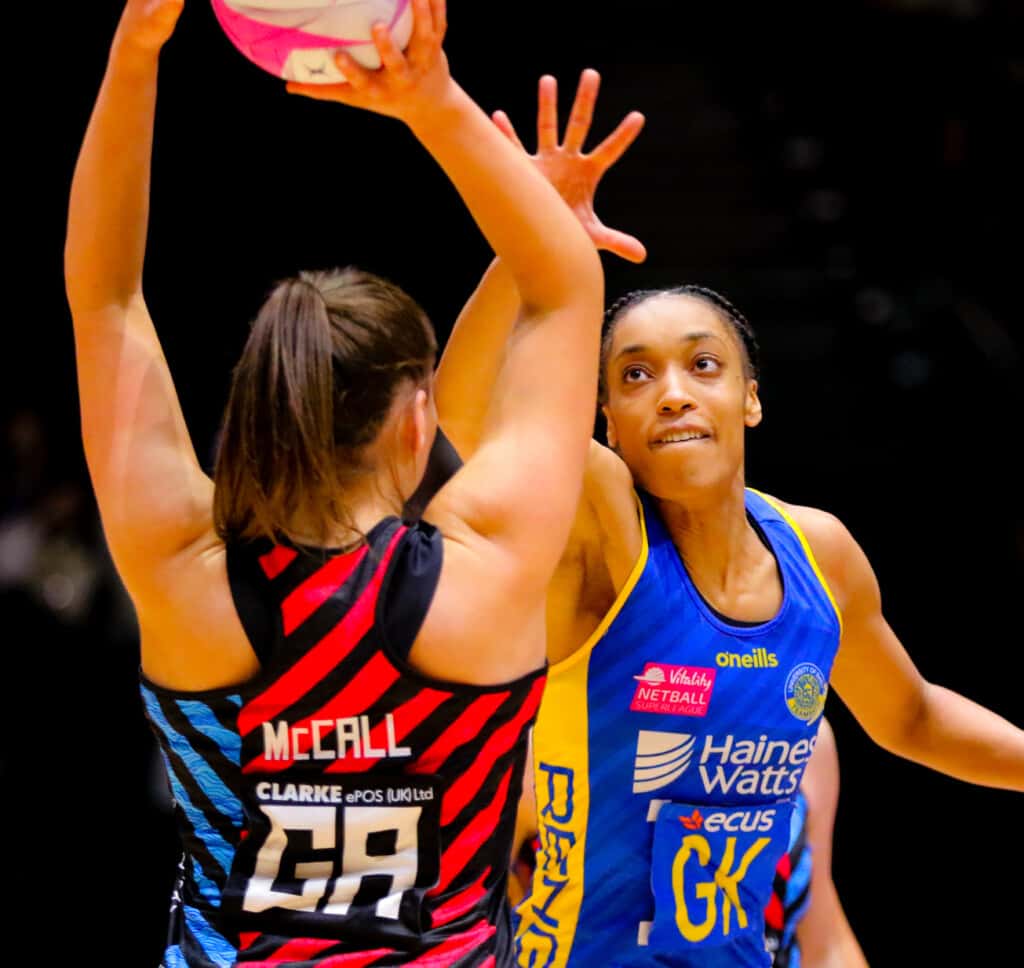 While Sirens head coach Lesley MacDonald brings with her 127 caps – still the most in Thistles history.

“She [Lesley] has so much knowledge in that shooting circle, in that goal attack position,” said McCall, who named the former national captain in her dream starting seven.

McCall and her squad are confident that, bolstered by home support, they can wrap up last season’s unfinished business and earn a trip to Finals Day this year.

A big international year too

McCall is well aware Greenway will be watching—and not just because she’s part of the VNSL punditry team on Sky Sports.

The Thistles head coach will be paying extra attention to the Sirens and other Scots scattered across the league to determine who will have the honour of starting for their country at the Commonwealth Games in Birmingham this summer.

In October, Glasgow will be the home of the European Netball World Cup Qualifiers, where two of Scotland, Northern Ireland, the Republic of Ireland, Wales, Gibraltar or the Isle of Man will book a trip to Cape Town next summer.

McCall, who four years ago was the youngest member of Scotland’s Gold Coast Commonwealth Games squad, is relishing the idea of playing host.

The Thistles will be looking to clinch their 15thWorld Cup berth, having missed out just once in 2011.

“That’s going to be such an advantage having World Cup qualifiers at our home venue,” McCall agreed.

“We know what it’s like, we know what the crowd is like, and during those tough games that’s really going to push us over the line, fingers crossed.”

It’s time for the loudest fans in the league to make some serious noise.

Reading: 5 mins
Previous Story Vitality Netball Superleague 2022: What we learned from Season Opener weekend
Next Story Netball is Home: “Prove yourself, do your job and do it well and the rest will be history,” says Razia Quashie.