Wasps return to the CBS Arena on Saturday

Wasps return to the CBS Arena on Saturday

New Wasps captain Josie Huckle has issued a rallying call ahead of the franchise’s first home game in two years and has sights set on a return to the top four.

Huckle and her teammates are back at the CBS Arena for competitive netball for the first time since 2020 as the Vitality Netball Superleague returns to a home-and-away format.

Severn Stars are in the visitors and both sides will be looking to pick up their first three points of the season after they both suffered defeats on both days of the Season Opener weekend.

Wasps were edged out by Strathclyde Sirens on Sunday after defeat to Saracens Mavericks on Saturday – a hugely physical contest that Huckle believes underlines what those making their first trips to a netball match are letting themselves in for.

“The most exciting the is seeing the speed of netball,” she explained.

“It’s incredible. Some of my friends hadn’t been to see a netball game and they came a couple of years ago and they were like, ‘Oh my god this is absolutely insane.’

“Because it’s loud, it’s vibrant, there are big hits and people taking each other out, there are some really incredible athletes on the court.

“So just come down and see what it’s all about.”

Saturday’s clash with Stars comes ahead of a three-game stretch of away fixtures – and tickets to the contest at the CBS Arena this weekend are still available here.

For new look Wasps, Huckle is confident they have what it takes to contend as Lauren Nicholls, Lucy Parize and a number of talented youngsters take to their home court for the first time.

Huckle’s seniority is still settling in. For years, she was part of the “youngies” on the squad. Now she’s adjusting to the “oldie” badge as she moves into her new role, where she’ll be the one guiding less experienced players.

The goalkeeper should be no stranger to a leadership role, combining her playing career with her position as a teacher and Head of Netball. 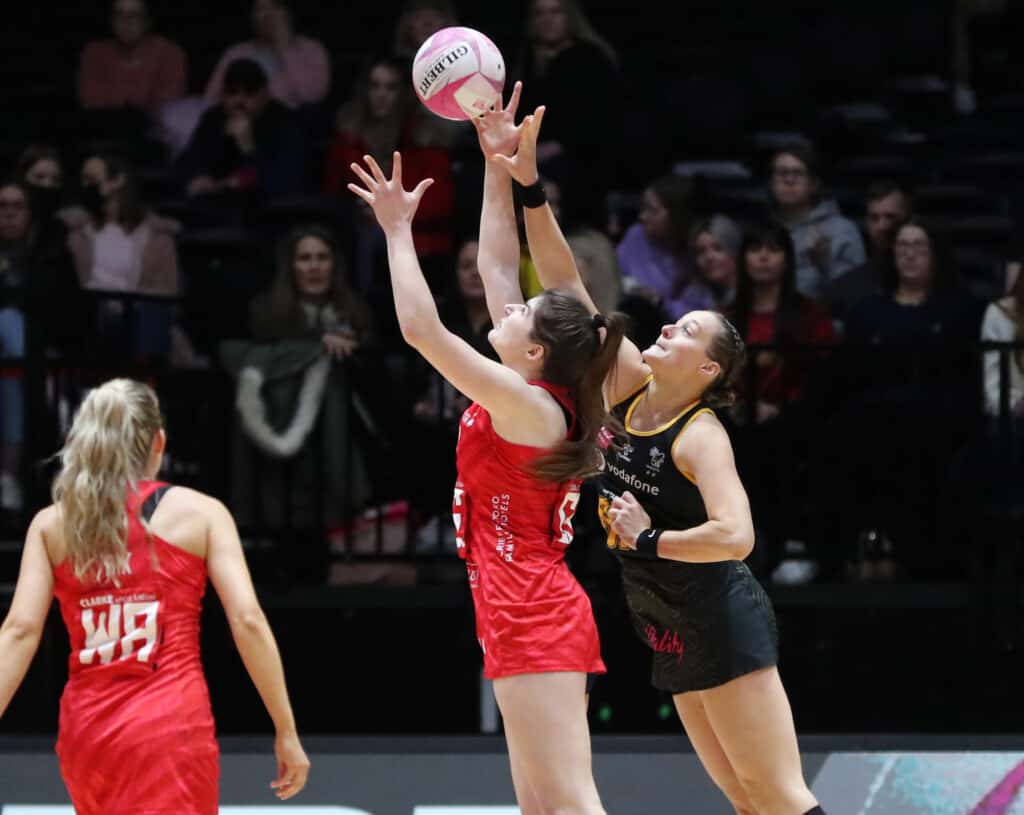 She hopes her no-nonsense approach will propel Wasps back into the mix for their third Vitality Netball Superleague title this season having last year missed out on the semi-finals for the first time since joining the competition in 2017.

Although the 30-year-old – a four-time VNSL champion with Surrey Storm and Wasps – will be able to impart over a decade’s worth of top-flight wisdom, she was still shocked to actually hear the announcement come out of head coach Mel Mansfield’s mouth.

“It’s an absolute honour to be named as captain. I was putting my hand up for it, saying it’s what I’d like to do, and they agreed I was the person they wanted to have in.

“To be able to be in charge of a bunch of amazing athletes is just so exciting. To be able to lead them out and hopefully be a good role model on and off the court for them is really important.”

“You get what you see with me. My heart is on my sleeve. I’m an excitable, slightly wild person,” said Huckle, laughing.

“I think I bring a lot of energy and enthusiasm and I hope people vibe off that and they feed off of that, and they can use that for themselves through the tough parts of the season.”