Kim Borger and Team Bath are looking to bounce back (Image: Ben Lumley)

It’s that time of the week when we turn our attention to the week that was in the Vitality Netball Superleague and pick out the major talking points from six games in Round 3.

Here’s what we learned from three days of action…..

There was plenty of excitement of Season Opener as the 2022 Vitality Superleague campaign got underway, but Round 3 was extra special.

Oh it's good to have home crowds back🤩

Strathclyde Sirens, Saracens Mavericks, Manchester Thunder, Loughborough Lightning, Wasps and Leeds Rhinos all got to welcome their fans back for competitive netball for the first time in almost two years.

And what an occasion they all made it.

Players and coaches have been quick to underline the role fans have to play in roaring the franchises on, and they delivered in buckets across the weekend.

Sirens’ fabled tribe almost willed the team to another impressive comeback victory, Thunder’s trademark drum at Belle Vue ensured Surrey got quite a welcome, Yorkshire got their netball back and the champions Loughborough were able to show off their trophy.

Bath, Dragons, Stars, Pulse and Storm all get their chance in Round 4 and it promises to be another memorable weekend.

All Star weekend for netball?

Amidst the glitz of the Super Bowl this weekend, and the NBA’s All Star announcements last week, Talking Points got to thinking…..

Could an All Star game be on the cards for the Superleague? Squads and captains voted for by the fans, captains having their pick from those assembled, The Rock doing the entrances.

Ok maybe the last one is pushing it, but who wouldn’t like to see Towera Vinkhumbo linking up with Fran Williams to keep out Eleanor Cardwell and Proscovia Preace.

The flair of Sacha Corbin and Liana Leota on the same team or even teammates like Kim Borger and Layla Guscoth going up against each other.

There’s an awful lot of logistics to work through – and that’s for people far cleverer than us – but here at Superleague Towers we like the idea and that’s enough for it to get a mention in this week’s column.

It’s hard to think Team Bath could have had it any tougher in the first Monday Night Netball of the season – so victory at Leeds Rhinos deserves special mention.

Serena Guthrie was still absent, a covid outbreak elevated three training partners to the matchday 12 and kept Head Coach Anna Stembridge away from the action.

Top four finishers last season Leeds tough opposition were coming off an impressive win at Sirens on Friday and determined to make their mark after missing Season Opener weekend with their own issues.

Throw in the small matter of a Yorkshire team returning to the county for the first time in six years and the English Institute of Sport Arena in Sheffield was primed to topple the five time champions.

However Bath showed why they are serial contenders, and while a first title since 2013 might be on the cards with an extremely impressive 20-goal victory.

Is Layla Guscoth the intercept queen?👑

Not a bad way to overcome the odds, bounce back from defeat to London Pulse and prepare for a return home in Round 4 – tickets available here.

Jodie Gibson and Razia Quashie have both spoken about the need for Mavericks to be more consistent – three wins from three games is an impressive way to silence the doubters.

There is no doubting a squad of Mavs quality should not be on the outside looking in when it comes to top four places – but such has been the competitiveness of the Superleague that’s exactly where they have found themselves since 2016.

Kat Ratnapala has kept the majority of her squad intact and perhaps crucially  has the experience and quality of Gabby Marshall, Quashie and Gibson fully fit.

With injuries behind them and South African shooter Ine-Mare Venter looking in ominous form Mavs have won all three of their opening league games.

Just as impressive has been the way they have won, coming out on top in close contests that by their own admission they might have lost over the last few season.

There’s a long way to go, but early signs look promising in Hertfordshire.

Manchester Thunder and Karen Greig were bitterly disappointed in last season – when they lost out in a semi-final thriller against Team Bath. 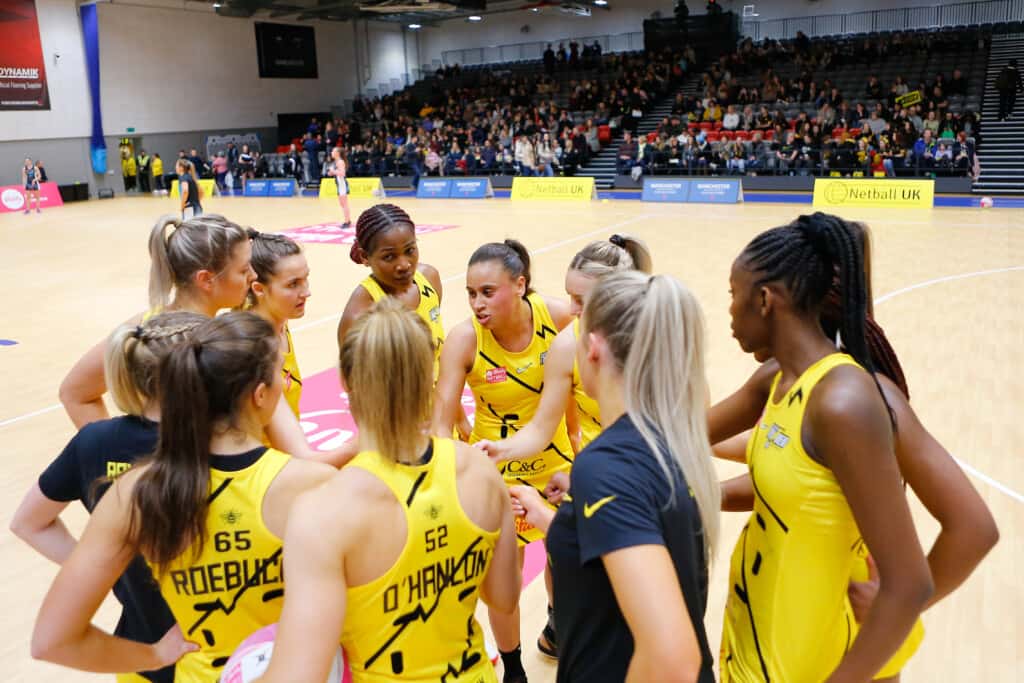 In 2020 they were too when they were unable to defend their title due to the pandemic cutting the season short.

They are out to make amends and if the off season captures of Nat Metcalf and Shadine van der Merwe didn’t underline it, then their barnstorming start to the season has.

Three wins from three has them top of the pile on maximum points, but it’s their goal difference that separates them from Mavericks and by some distance.

Thunder have racked up more than 70 goals on all three occasions and have a goal difference of +59 having scored 225 goals, they’ve laid down the early marker and had us at Superleague HQ scrambling for the record books.