Despite having a Commonwealth gold, multiple World Cup medals, two Superleague titles and almost 200 caps for the Vitality Roses, Jade Clarke is hungry for more.

The 38-year-old has a career that spans over two decades and is one of the stalwarts of the netball Superleague.

Now ‘age is just a number’ is such a worn-out cliché but for Clarke, this is what drives her and what pushes her to win more medals – of which she already has many!

On the latest episode of Off the Court with Caroline Barker and Tamsin Greenway, Clarke opens up on where she feels she is at in her career and gives her thoughts ahead of a big summer with the Commonwealth Games in Birmingham looming.

In what is now her second full season with Rhinos, after signing as their first player in 2020, Clarke is looking for a repeat last season’s success with another top four finish with the Yorkshire franchise.

After back-to-back victories in recent weeks, including an inaugural win in their home city against Wasps, Rhinos have been pegged back to fifth after defeat in the Battle of the Roses against league leaders, Manchester Thunder.

Congratulations to @thundernetball on a superb event at the @AOArena yesterday – great crowd and atmosphere! 👏

In the off season, Rhinos welcomed the additions of South Africa’s Sigi Burger and former Thunder GK, Rebekah Airey.

While Clarke may be one of the elders in the Rhinos ranks, she remains as determined as ever to compete at the highest level.

“What motivates me every day is the thought of doing something that people might not think is possible to do,” Clarke begins to explain. “I want to show that the oldies can do it too!

“I love going to training. I hate training on my own so I just love being part of that team set up.”

Clarke has worked under many different coaches during her distinguished career but this year is the first time that she has worked with Tracey Robinson who stepped into the hot seat at Leeds after coaching the Malaysia national team and serving as an assistant for the New South Wales Swifts in the Suncorp Super Netball league.

But Robinson is not only giving Clarke her words of wisdom, she is also calling on some friends overseas.

“Tracey has been absolutely amazing. She’s worked with so many of the great attacking players like Kim Green, Chelsea [Pitman] so I’m picking her brain all the time about what she can add to my game and she’s already noticed lots of little things.

“She’s actually got us a call with Gabby Simpson so I can’t wait to pick her brain as well.” 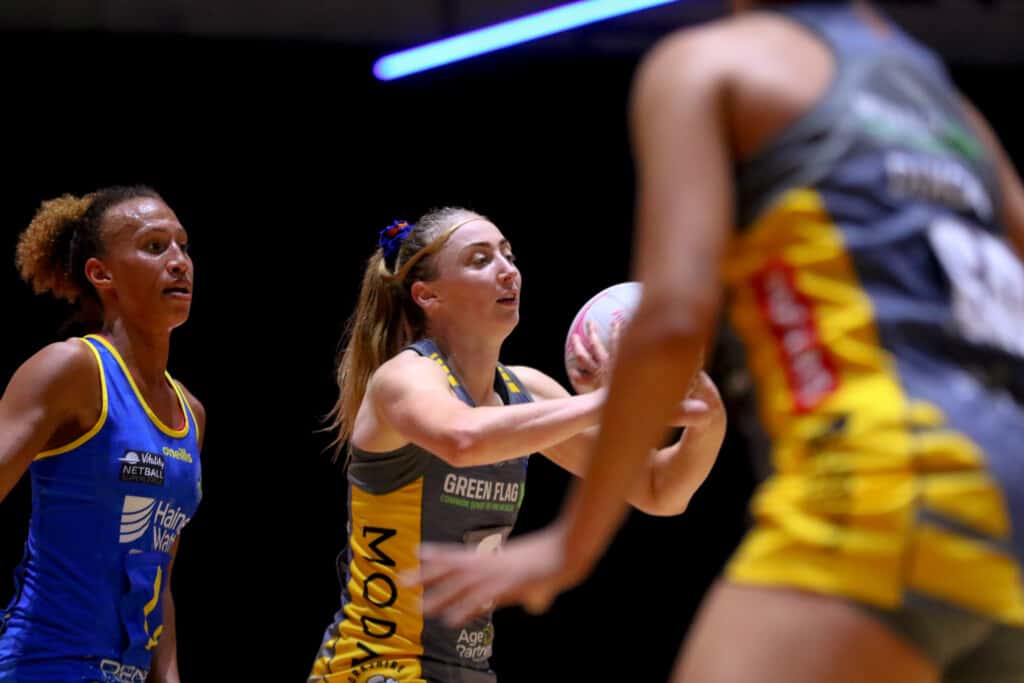 Another player who needs no introductions who Clarke knows better than many, Serena Guthrie, announced last week that she would be stepping away from the court as she prepares for a new chapter of her life as a mother to be.

Like Clarke, Guthrie has become synonymous with the Roses red dress and her character will be hard to replicate.

“You can’t replace Serena. You can’t help but smile when you think about her and that’s what she’ll leave.

“She’s the one giving us a performance in the changing room before we’re out,” Clarke laughs. “I hope we get to see her in and amongst the squad in the lead up to the Commonwealth Games.”

Being on trial again

At international level, Clarke is England’s most capped player and under Vitality Roses head coach, Jess Thirlby, Clarke’s experience and talent have shone through in a new era for the team.

She was a key part of the squad that claimed a famous victory away in New Zealand and most recently, she was a member of the squad that pushed Australia all the way in the final of the Netball Quad Series at the start of 2022.

With Guthrie stepping aside, Greenway asks Clarke whether she could see her role changing in the Roses set up.

“I’ve experienced all kind of roles in the team – being a starter, being in the crowd, coming on at half time so I think it’s about just embracing your role and being ready for it.”

Looking ahead to Birmingham

The Commonwealth Games presents Clarke and others with an opportunity to do something no English players have done before – going all the way for a second time.

For Clarke she feels there is now a depth of talent there to do that and the Games present an opportunity do more than win a medal.

“I think Jess [Thirlby] has done really well especially during these Covid years giving so many people opportunities. You’ve got players based in Australia and New Zealand players who have been away, and while they’ve been away younger players have stepped up and put their hand up and said, ‘I want to be in this team now.’”

It’s so competitive but whilst we’re all competing against each other, we all want to see each other do well. It feels like a family. We are really close and I think that’ll be the difference for us this time.

Looking to Tamsin, Clarke adds: “For us when we were growing and we got on the England team it was always about that gold medal and so many have contributed to that to get us to that stage. I always thought once I got my gold medal that would be it and I’d be out the door. But you just realise it’s so much more than that.

“What we’ve seen with Serena over the last week and the response to her shows it is so much more than that, in terms of the impact you can have and the legacy you can leave.”

Watch Off the Court every week on the VNSL YouTube channel, where you can also see match highlights, features and interviews.