Celtic Dragons celebrate their second win of the season at the Spring Showdown. Image: Morgan Harlow

After an action packed first day of the Vitality Netball Superleague Spring Showdown, here’s a recap of what happened at the Resorts World Arena.

Loughborough Lightning kicked off the Spring Showdown with a 57-54 victory, coming from behind in the final quarter against Surrey Storm.

With both Mary Cholhok and Nat Panagarry out of the Lightning squad, Victoria Burgess drafted Hannah Williams and Ella Clark into her starting seven whilst Mikki Austin welcomed the return of Felisitus Kwangwa in Storm’s defensive end.

Storm took an early advantage in the first quarter as Kwangwa staged her presence, registering three turnovers in the first 15 minutes. At the other end, the league’s top scorer, Proscovia Peace showed why she is the sharpest shooter in the league, helping her team establish a four goal lead. Midway through the first quarter she left the Resorts World Arena crowd in awe, showing tremendous balance to catch the ball one handed and loop the ball into the net, all in the same movement.

There are no words! 😱@peace_proscovia is just on another level 🤯

After the first interval, Lightning fought back and reduced the deficit straight away. Hannah Williams and Hannah Joseph managed to find pockets of space, giving Lightning more opportunities to feed their shooting circle. Following some patient build up, Clark and Suzie Liverseidge capitalised and showed great composure under the post as they swung the second quarter in their team’s favour, winning 18-8 to go in at half time with a 30-24 lead.

Into the second half and the two sides restarted going goal-for-goal. Storm showed great resilience as Leah Middleton and Grace Sullivan made a couple of key intercepts. With the calming presence of Sophia Candappa, Storm increased their service into Peace as she pushed her side ahead on the scoreboard, 42-39 going into the final quarter. 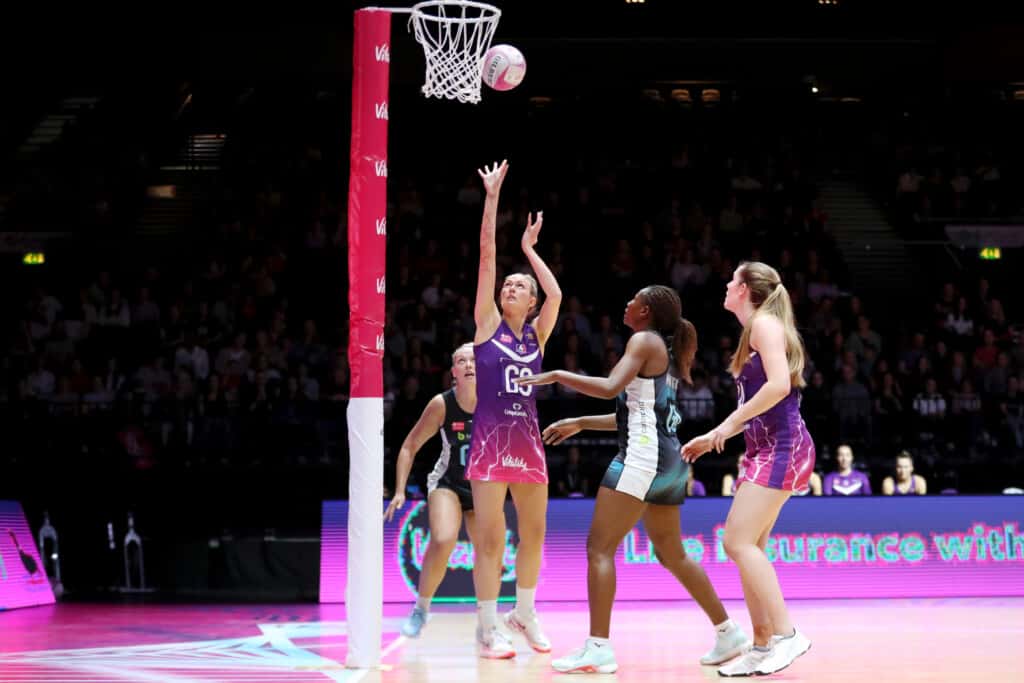 But the 2021 champions regrouped and showed their grit as Alice Harvey, who claimed Vitality Player of the Match, won a number of key deflections to stifle Storm’s attacking threat. Emma Thacker helped bolster the Lightning shooting circle and contributed seven goals as Lightning turned the game back in their favour, holding on in the end for a three point victory.

Celtic Dragons have surpassed their points total from the 2021 campaign, winning their second game of the season against Leeds Rhinos.

Off the back of successive defeats, Tracey Robinson was looking for a response from her Rhinos team and they delivered in the first quarter. Sigi Burger and Brie Grierson combined, scoring 14 goals between them as they took a 16-14 lead into the first break.

In the second quarter, Dragons fought back and showed why many pundits believe the Welsh side are a team not to take lightly. Dannii Titmuss-Morris made some alterations calling Annabel Roddy into goal defence, moving Shona O’Dwyer into centre and pushing Laura Rudland into wing attack as Dragons flipped the game in their favour. In the attacking third, Georgia Rowe continued her great form this season, taking 100% of her chances under the post to help bring the Green Army level at the break.

Dragons took the lead for the first time in the third quarter but it was Rhinos who regained the edge, scoring 12 goals to the visitors’ 11 as the Yorkshire side took a one goal lead into the last 15 minutes.

Who doesn't love a @QuandaNoel celebration? 🥳

You can watch this game on @SkySports Action, Mix and YouTube 📺 pic.twitter.com/5Pb2UTTJvK

With the game still in the balance, Dragons upped the ante as they sensed all three points were within reach. Shaquanda Greene-Noel, who impressed on her debut at the Resorts World Arena at the Season Opener, showed why she loves being in the defensive circle, making an impressive 11 turnovers, limiting the service into Burger. But it was Nia Jones who kept the team motivated and spurred the Dragons on, covering most of the court, earning herself Vitality Player of the Match as her side took the advantage with just five minutes left to play. Rowe kept the scoreboard ticking over, missing just one opportunity under the post, scoring 40 goals.

“I’m so proud of them. We’ve had a few games where it’s been really close we’ve made great progression. We were in a goal-for-goal game but we were comfortable and we managed to deliver right at the end.” Dannii Titmuss-Morris

Manchester Thunder stretched their lead at the top of the table after another convincing win over Strathclyde Sirens.

Karen Greig made a number of changes to Thunder’s starting seven, bringing Yasmin Roebuck and Lois Pearson in at wing defence and goal attack respectively. For Sirens, Lesley MacDonald stuck with the same team that came out on top against Leeds Rhinos on Monday night.

Dressed in their striking purple away kit with yellow lightning strips, Thunder started brightly taking a commanding 21-11 lead as Pearson combined well with Eleanor Cardwell. At the other end, Shadine van der Merwe and Kerry Almond showed why they are one of the most feared defensive pairings in the league, making Bethan Goodwin work hard for the space under the post.

Into the second quarter and the South African defender, van der Merwe plucked off a couple of feeds around the circle edge to put the hosts on the counterattack. Niamh McCall’s afternoon was unfortunately cut short after a fall in the attacking end just before the interval. 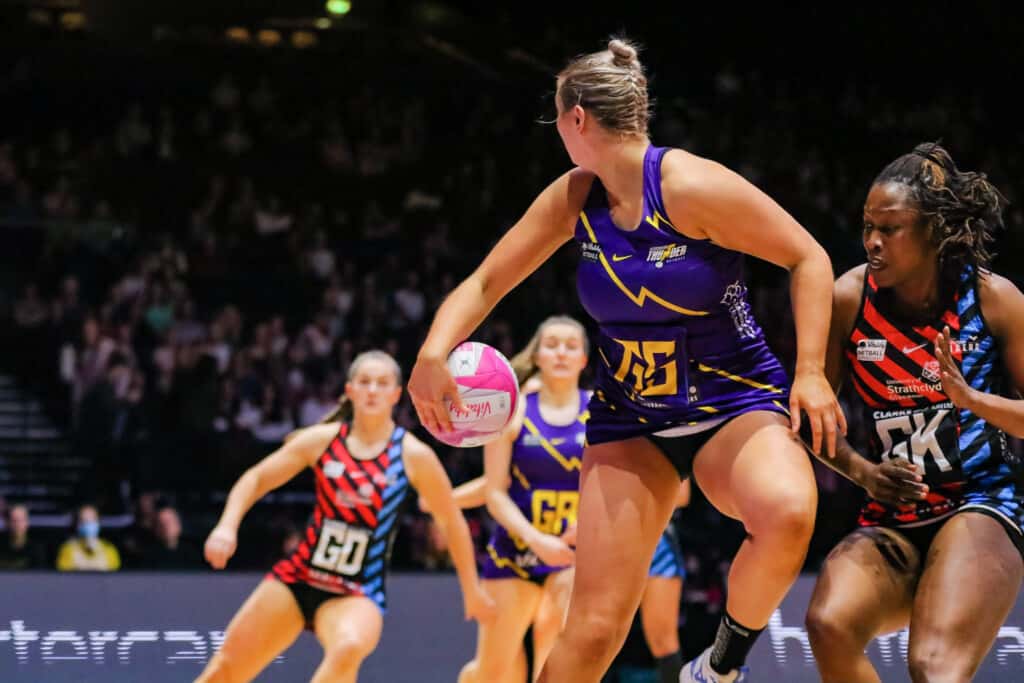 Eleanor Cardwell brings the flair with a string of one handed catches. Image: Ben Lumley Photography

After the break, this time paired with Joyce Mvula, Cardwell continued an enjoyable afternoon under the post, making two fantastic one-handed catches before finding the net, receiving a big cheer from the crowd as Pearson returned. At the other end, Almond went to the bench as Emilia Roscoe came in at goal defence, pushing van der Merwe to goal keeper who kept things tight at the back.

With Thunder holding a twenty-plus goal advantage, the Mancunians made further changes as they played out the last 15 minutes. Sirens played with more freedom and Emma Barrie supported Goodwin, after being introduced for McCall, to help them win the final quarter and give them something to build on as they look to next weekend’s visit to Loughborough Lightning.

London Pulse returned to winning ways, snatching victory in the closing stages in an entertaining encounter with Wasps.

With Mel Mansfield announcing she will be leaving the two-time champions at the end of the season, Wasps were keen to give their head coach a strong showing at their second home in Birmingham after a run of three defeats. They made just one change to the team that lost away at Saracens Mavericks; Caroline Tarnowski came in for Rachel Fee at wing defence. For Pulse, Sam Bird made two alterations bringing in Jas Odeogberin and Alicia Scholes as Ashleigh Dekker and Ellie Rattu dropped to the bench.

For much of the first half, Pulse tried to edge away. Olivia Tchine showed why she is amongst the top five shooters in the league, moving around the shooting circle to keep Josie Huckle and Ella Powell-Davies on their toes as she sank 17 of Pulse’s 21 goals. Her opposite number Rachel Dunn found herself in a battle with Lindsay Keable who has stepped up in the absence of Fumni Fadoju. But thanks to hard work through the middle of the court through Iona Christian, Wasps repeatedly responded to Pulse’s advances as they closed the gap before the break to just three.

Into the second half and Ashleigh Dekker was brought into the fold for Pulse and made an instant impact, combining well with Sacha McDonald and Tchine in the attacking third. But as was the pattern for much of the game, Wasps came back and Ella Powell-Davies, who was previously coached by Sam Bird, flew into the middle of the court to make a flying intercept and bring Wasps back into the game as the teams drew the third quarter 10-10.

Going goal-for-goal, the two sides set up an exciting finale for the Birmingham fans as the game looked to be heading for a draw. But Pulse kicked on in the closing stages and Kira Rothwell supported Tchine and Dekker, scoring three goals and providing three feeds as they saw out the game with a six goal win.

In the final game of the day Saracens Mavericks moved back into the top four with a 58-44 victory over Severn Stars.

After back-to-back wins against Wasps & Dragons, Saracens Mavericks were hoping to make it three in a row with victory against Stars, a team they haven’t lost to since 2018. And after their recent good form, Kathryn Ratnapala named an unchanged starting seven. Similar for Stars, after a gutsy showing away at Manchester Thunder, Melissa Bussell named the same starting seven.

It was Mavericks who took an early advantage; Aliyah Zaranyika produced a lovely intercept on the edge of her team’s defensive circle to turn the ball over. In centre court, Beth Ecuyer-Dale worked hard to supply the shooters, picking up eight feeds after a great first half. In front of her, Kadeen Corbin combined well with Britney Clarke who has done well in recent games to fill the void of Ine-Mari Venter. 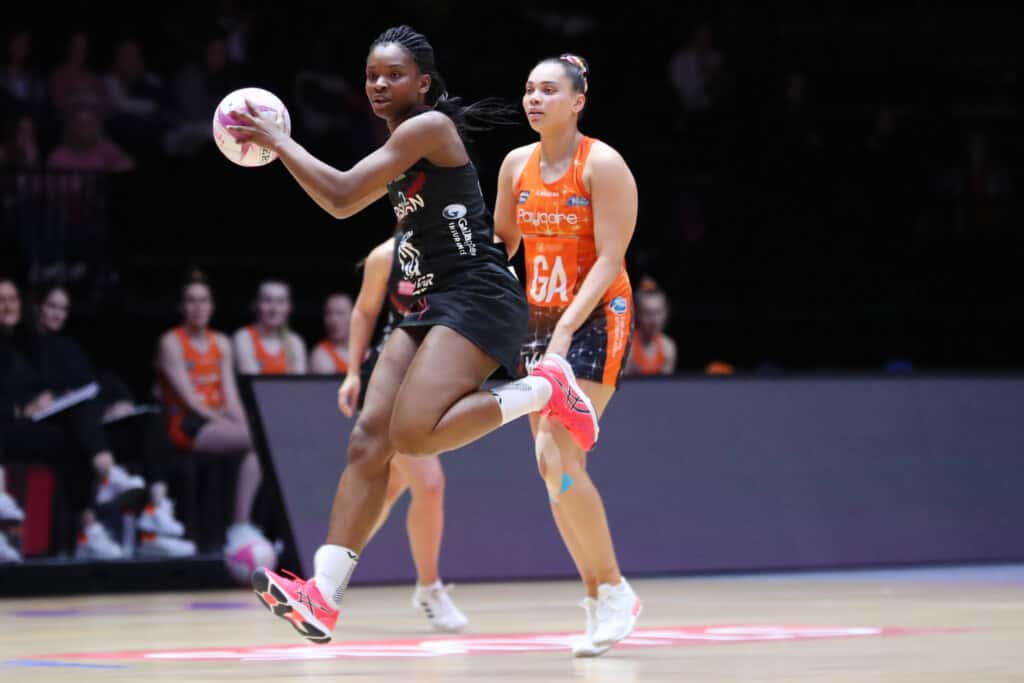 Down 13-8 after the first quarter, Stars fought back as Paige Reed worked the circle whilst Cat Tuivaiti got the Resorts World Arena crowd purring with some of her signature flair. At times, the New Zealander failed to connect with her teammates and Mavericks capitalised as the Corbin and Clarke combination continued to thrive under the post. By half time, Mavericks’ lead had stretched to twelve.

Even though Mavericks were enjoying success in attack, Stars goal keeper Lucy Herdman made the hosts work and surpassed 50 turnovers for the season. The two teams tied much of the third quarter but following the addition of Chloe Essam, Mavericks took an extra two goal advantage just before the final break.

In the last 15 minutes of the day, the crowd raised their voice one last time as New Zealander, Temalisi Fakahokotau came on for her debut and within moments produced a fine piece of awareness, jumping out off the side of the court as she passed on a loose ball just before the middle third. Stars finished the day strong as Michelle Drayne replaced the hard working Bethan Dyke at centre and supported Issy Eaton at shooter as the two teams drew the final quarter 12-12 with Mavericks taking the win 58-44.