Here’s what happened on the final day of the Spring Showdown at the Resorts World Arena in Birmingham.

Leeds Rhinos returned to winning ways as they fended off an inform Team Bath, winning 64-54.

Team Bath came into this game in great form after picking up nine points from their last three outings. For that reason, Anna Stembridge made no changes to her starting seven that beat Pulse in Round 12. Meanwhile for Leads Rhinos, Rebekah Airey came in at goal keeper in place of Tuaine Keenan after their defeat to Celtic Dragons on day one of the Spring Showdown.

Looking to bounce back, Rhinos took an early lead thanks to decisive work from the attacking combination of Sigi Burger and Brie Grierson. Bath battled back and levelled the score but Grierson helped Rhinos re-establish their lead as they held the advantage before the first break.

Bath regrouped and came out strong in the second quarter as Layla Guscoth and Phumza Maweni fought for every ball and made space harder to find. Centre, Imogen Allison did her share of defensive work in the middle of the court, helping Bath stay in touch with the visitors who maintained their four goal lead going into the second half.

After the break, Rhinos carried on where they left off, showing great intensity at centre court with Vicki Oyesola, Lydia Walker and Jade Clarke putting pressure on their Bath counterparts. This coupled with great shooting from Burger, who kept the scoreboard ticking over as Rhinos stayed eight goals ahead.

With victory in sight, Rhinos kept on their opponents as Clarke continued to disrupt Bath’s attacking flow through the court. The five-time champions tried to up the pace but Rhinos keeper, Airey who won Vitality Player of the Match, making a superb six turnovers, helped prevent Bath making any inroads on their lead as Leeds held on to avenge their twenty goal defeat from earlier in the season.

Lightning come from behind against Dragons

Loughborough Lightning made it two wins from two at the Spring Showdown, coming from behind in the final quarter to win an entertaining encounter with Celtic Dragons.

Hot off the back of their second win of the season against Leeds Rhinos yesterday, Dannii Titmuss-Morris and her team were hoping to deliver another scare against the defending champions.

With unchanged starting sevens, both teams made positive starts to the game, going goal-for-goal for much of the first quarter. But Lightning found the edge in the final five minutes as Hannah Joseph linked up well with Suzie Liverseidge and Ella Clark in the shooting circle, establishing a five-goal advantage. 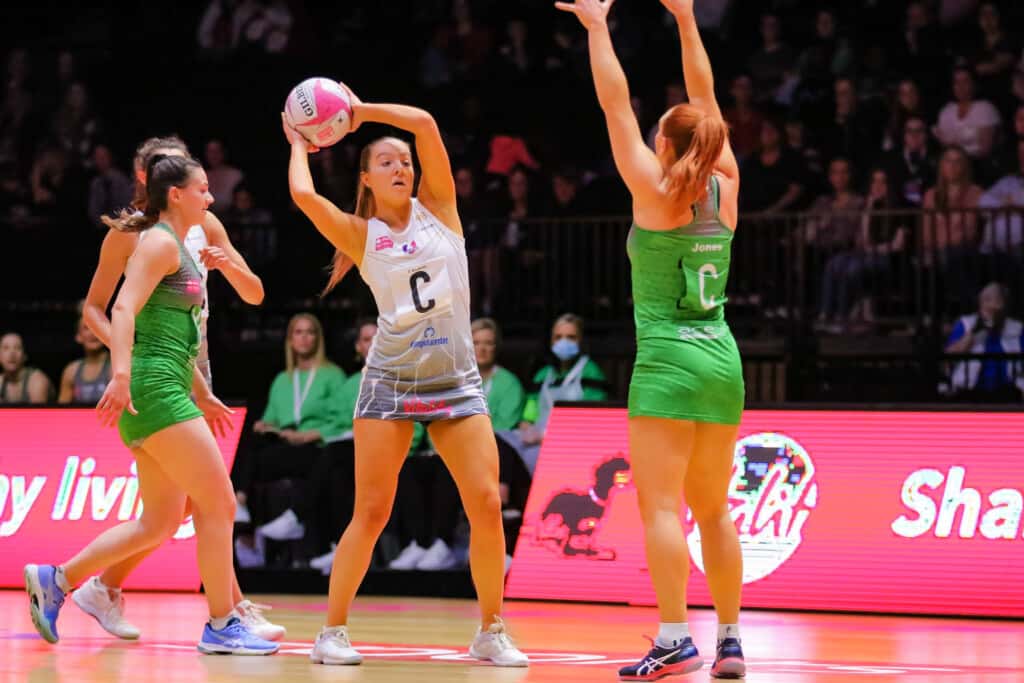 After causing an upset against Rhinos, the mood in the Dragons camp was very upbeat and the confidence amongst the team was visible to see. Shaquanda Greene-Noel continued to be a physical presence in the defensive end whilst Nia Jones motivated those around her as the Green Army kept Lightning in touching distance, edging the quarter by a goal.

Riding a wave of a momentum, Dragons kept clawing at Lightning’s lead and midway through the third quarter, to the delight of the Birmingham crowd, the Welsh side took a three goal lead after superb work through the middle of the court from Lefebre Rademan. Unfortunately, a couple of unforced errors in the centre invited Lightning back in as they finished the third quarter 41-39 ahead.

Dragons kept Lightning close up until the final few minutes as Lightning frustrated them through good shape and organisation. Greene-Noel fell under the post just before the end but recovered to return to court as the game finished 56-52 in favour of Lightning.

Manchester Thunder wowed the Resorts World Arena, notching up an impressive 80-50 win over Surrey Storm to clamp down on a place in the play offs.

Storm named an unchanged line up whilst Thunder welcomed the returns of Nat Metcalf and Joyce Mvula.

In the opening 15 minutes, both teams shared blows. Mvula, back under the post for Thunder, combined well with Eleanor Cardwell meanwhile at the other end, the league’s top scorer, Proscovia Peace, who scored a massive 60 goals in their last meeting, kept Storm in touch with four the difference at the first interval.

Into the second half and the Thunder defence tightened the space around Storm’s talismanic shooter with Kerry Almond making a couple of key intercepts. Her partner in crime, Shadine van der Merwe joined in on the action just a few moments later, soaring through the air to make a flying intercept from a deep ball into the shooting circle from Mikki Austin. Cardwell, who impressed with a string of one handed catches yesterday afternoon, produced some great link up play with Metcalf and Mvula, driving into the shooting circle to help extend Thunder’s advantage to 34-23.

They are just unstoppable! 😎 pic.twitter.com/9aOBOQLVO8

Thunder continued to dominate in the third quarter. Substitute Lois Pearson played off the experience of Metcalf and Cardwell, producing some nice interplay in the attacking third. Metcalf in particular, who won Vitality Player of the Match, showed great vision throughout the game, recording an exceptional 37 feeds for the league leaders.

As the game wound down in the fourth quarter, Thunder had one nervy moment when van der Merwe collided with Austin with Pearson coming on in her place. But the table toppers showed why their attack is the best in the league as the pushed their way to the 80 mark for the first time this season – their biggest win of the campaign so far.

“It’s been a great Easter. All our girls got some game time and this weekend’s results are credit to the work they do on and off the court.” Karen Greig, Manchester Thunder Head Coach

London Pulse jumped back up to third with what could be a significant win in the race for the top four against their London rivals, Saracens Mavericks.

With two top four rivals coming head-to-head, the Resorts World Arena crowd were in for a treat and the first half didn’t disappoint.

Turning the ball over, Mavericks seized an early advantage, going four goals up as Britney Clarke was clinical under the post. But Pulse quickly regrouped and through Sacha McDonald and Olivia Tchine, the London side were back level as the two teams went goal-for-goal.

Into the second quarter and Mavericks broke away again. A fantastic couple of intercepts from Razia Quashie set her side on her way as Sasha Corbin led her team up the court, calling out the plays as they approached the shooting circle. With a big three points on the line, it didn’t take long for Pulse to react as they pegged their opponents back again, bringing the score to 27-26 just in Mavericks’ favour.

After the break, Mavericks turned to the bench as Gabby Marshall came on for Aliyah Zaranyika whilst Pulse kept the same seven. Both sides continued to match each other for intensity but midway through, Pulse took the initiative, pulling away with six minutes to go in the quarter as Alicia Scholes made a crucial intercept and showed great energy to move the ball through to McDonald and Tchine. 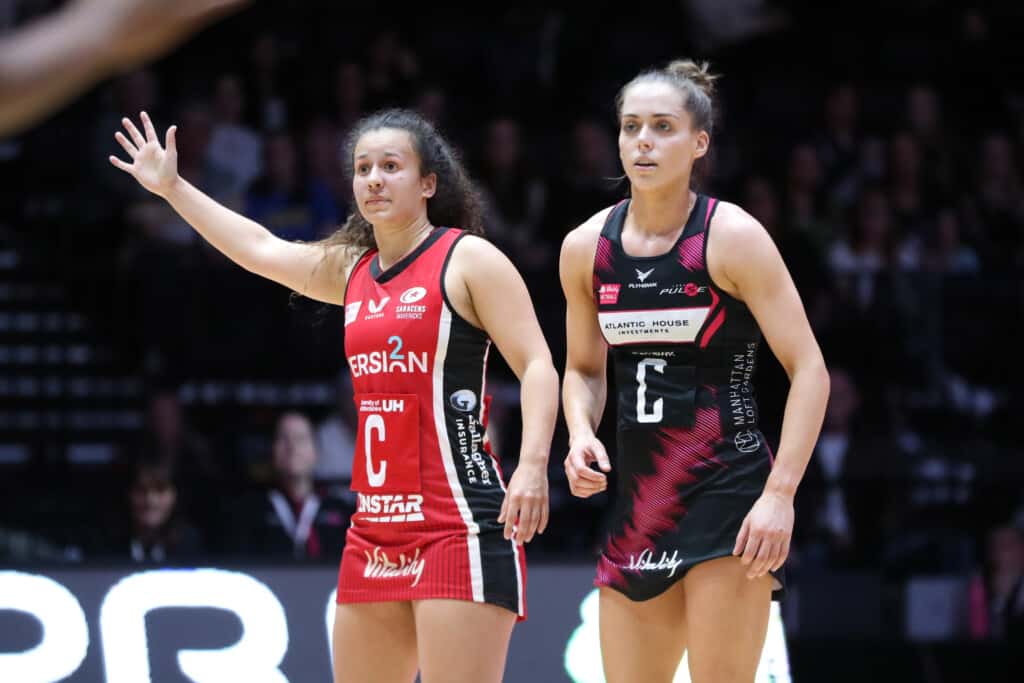 Going into the final 15 minutes, Sasha Corbin moved into centre and produced a set of fantastic catches and long passes to move her team up the court. The rest of the Mavericks team continued to work hard but smart positioning from Zara Everitt and Lindsay Keable made it difficult for Mavericks to nick quick goals. Pulse maintained their focus and erupted into celebration on the final whistle as they sealed a 53-46 win to move back above Mavericks in the table.

Stars close the weekend with a win

Severn Stars claimed the Midlands bragging rights in the final match of the Spring Showdown against Wasps, closing the weekend at Resorts World Arena with a 56-47 win.

Stars made a couple of changes to the team that lost out to Saracens Mavericks. Summer Artman came in at goal keeper, Lucy Herdman moved into goal defence and Katie Harris came in at goal attack. Mel Mansfield made just the one alteration to Wasps; Lauren Nicholls replaced Caroline Tarnowski at wing defence.

It was Stars who made the stronger start. The New Zealand pairing of Cat Tuivaiti and Liana Leota combined well around the shooting circle before linking up with Katie Harris to put the hosts 13-11 ahead in the first quarter.

Into the second quarter and Stars continued where they left off. Leota, in Tuivaiti style, played a stylish no look pass into Harris to help extend their side’s advantage. In an effort to swing the momentum back in Wasps favour, Mansfield enlisted the services of Gezelle Allison to support Rachel Dunn under the post after the Wasps shooter was crowded out by Artman and Herdman. By the break, Stars had boosted their lead to five and looked in a good position to seal their second victory of the season. 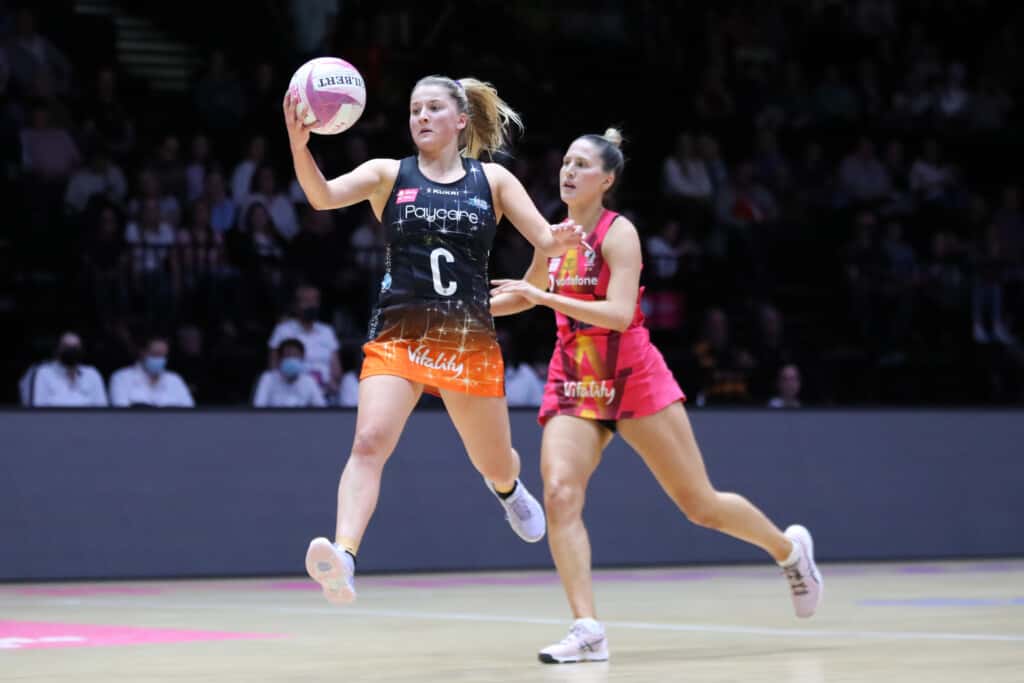 The changes continued into the second half as Wasps moved Ella Powell-Davies into wing defence to focus on Leota with Rachel Fee coming on at goal defence for Nicholls. The tactical shift helped put Wasps on the assertive as Allison and Dunn were given more service to reduce the lead to two. But just before the final interval, Stars regained their advantage thanks in part to more fantastic defending from Herdman and Artman to turn the ball over for their team.

Entering the final 15 minutes of the weekend, the nerves kicked in for both teams as Leota and Josie Huckle both made misplaced passes in the Wasps defensive end. With just over five minutes to go, the visitors in pink looked to be back in touching distance when Nicholls flew through the centre to intercept but just moments later, Tuivaiti defended from the front, denying Wasps from recycling the ball.

Stars hung on for victory, ending a run of 11 games without a win, moving onto six points with Dragons.