The average height for a woman in Malawi hovers just over five feet tall. At 5’9″, Joyce Mvula stands out.

The Manchester Thunder star’s stature serves as a benefit in netball, a sport she discovered at 13, that awkward age where some girls stayed small and others sprouted up: Mvula was a sprout.

“I didn’t have any friends and I was bullied,” she admits. “In Malawi people are short, so they were pulling me up on my height.”

One fateful day a coach told Mvula about netball, but it wasn’t love at first height; “At first I was like, ‘Oh!’ because I saw it was physical,” she said.

“At first I thought I couldn’t manage; I was saying no every time when they said I should join.”

Still, something about the sport intrigued her with the bonus of a court just round the corner.

“After being bullied at school I thought, ‘I should start playing netball,’” Mvula remembered.

“I remember it was two minutes’ walk from my house. So I was spending all my time on the netball court, doing shooting parties with my friends. 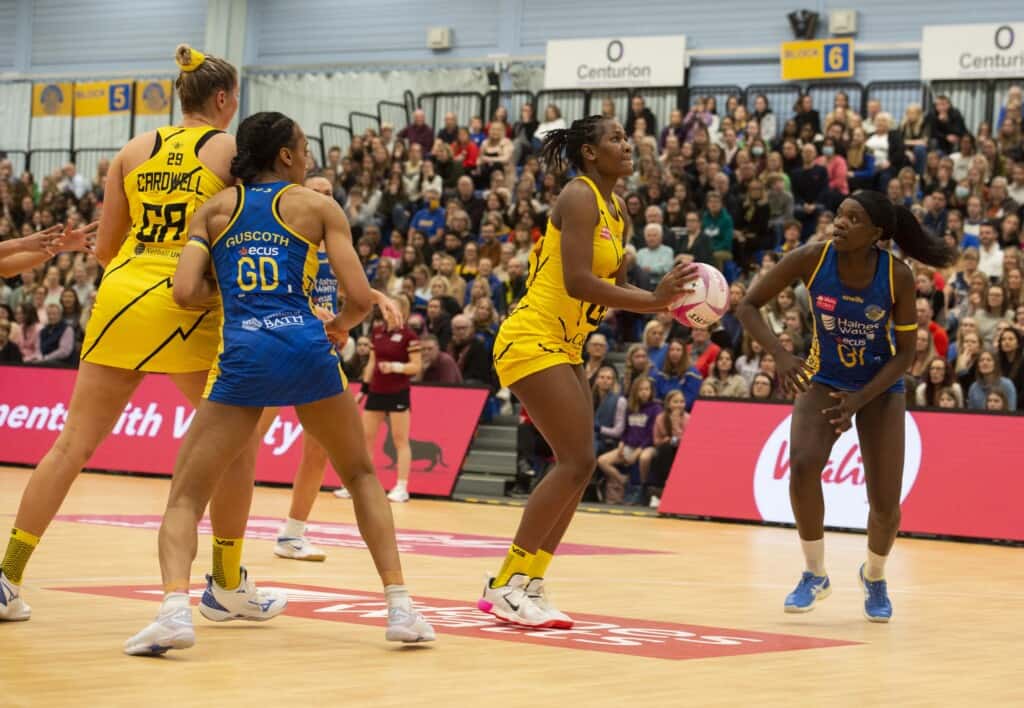 Mvula’s father didn’t initially think she should play, and netball didn’t really seem like a career possibility for the girl from David Momba Village. Now everyone in the village talks about her.

She said: “I remember when I started with Blue Eagles [Netball Club] I twisted my ankle and went home limping, and he said, ‘I told you not to go back there!’”

But she did, even sneaking out of the house to play.

“Then in my first tournament I was the best shooter,” she added, “And my dad was like, ‘Oh!’. He was surprised. Then he started supporting me, following me everywhere, and then I started getting scholarships. I had opportunities to go to school.

“He was pleased, and he’s never had to buy me supplies or groceries or things for school. Everything I was doing myself because I was receiving a little bit from netball.”

Where it started Vs Where’s it’s at now

Mvula has netted 476 goals in the Vitality Netball Superleague so far this season—enough to put her in fourth place in the scoring charts.

But she wasn’t always a goal shooter. In fact, her netball career began at the other end of the court.

“I love it [playing goal shooter] because I don’t get tired like most. It’s a cool position.”

Despite her success for club and country, it’s not a career she ever thought possible.

“I didn’t expect to sign my first contract,” she admits.

“I was like, do you think I can manage playing in the UK? I was so scared [but] it was good news for me and my family.”

Mvula has been a stalwart for the VNSL-leading Thunder since signing in 2017, seven years after her selection to the Malawi national team.

What a performance from Joyce Mvula – tonight’s Gilbert Player of the Match 👏 pic.twitter.com/JmKiNFiDpM

At club level, Thunder have already secured a spot in the Play-Offs and sit three points clear at the top, but Mvula knows the hardest games are still to come.

She said: “Now we’re in the top four, that’s where the fight is. If we can focus until the last day of finals, anything can happen.”

Six seasons after her debut Mvula is now the one throwing the welcome parties, most recently for teammate Shadine van der Merwe, who signed with Thunder after playing in Australia’s Suncorp Super Netball.

And if you want an example of just how deep the netball family runs just look at Mvula’s living arrangement—with van der Merwe, in a house belonging to former England international Sara Francis-Bayman, her art still adorning the wall behind the sofa.

Ask Mvula her favourite thing about netball and she doesn’t skip a beat.

Mvula’s other family is back in Malawi, including the son she spends months away from in order to play netball.

And in her absence, she notes, “He’s growing. I hope his friends aren’t making fun of him now.”

At least he has someone quite extraordinary to look up to.