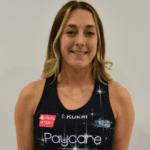 The final match of the Vitality Netball Super League Opening weekend saw Severn Stars take on Manchester Thunder in what was set to end the weekend on a high.

Both sides won their opening games of the 2022 campaign and with a loud crowd in Resorts World Birmingham cheering on both teams. Severn Stars Head Coach Melissa Bessell made two changes to the starting seven that took to court, with Nicole Humphrys and Elisha New making up the centre court with captain Liana Leota. Stars scored off their first centre pass with a quick goal from Paige Reed. After a goal-by-goal start, a crucial rebound from Thunder saw them take an early lead. Changes for Stars after 10 minutes added a wealth of experience to the court, with Katie Harris, Michelle Drayne and Adi Bolakoro taking to the court. The Thunder shooting end of Joyce Muluva and Eleanor Cardwell maintained their composure with the changes and ensured the score board kept turning over for Thunder, ending the quarter 10-19 in the lead.

Issy Eaton retook to the court for the second quarter with vice-captain Iman Thomas taking the WD bib. Thunder dominated the start of the quarter with a number of missed opportunities for Stars. Unfortunately for Thunder, Cardwell limped off the court forcing Thunder to make a number of changes. An unsettled quarter for Stars ending 19-38.

Both sides came out after the half time break with 100% effort. Bodies were flying all over the court as both teams went for every ball. Another injury for Thunder, with the umpire calling time to instructed Laura Malcolm to get checked following a hard hit forced even more changes. A better quarter from Stars, with increased control throughout the court and good movement in the attacking end with Paige Reed and Katie Harris linking well. The score reflected the possession on court, with the quarter score ending 11-13 (match score 30 - 51).

Both England Roses rejoined the Thunder side for the last quarter. Changes for Stars included Summer Artman re-entering at GK and Jane Taylor on at GA, joining Paige Reed in the Stars shooting circle. The game was certainly a game of two halves, with Severn Stars playing a much more controlled game led from the front by captain Liana Leota. The game finished 45 – 70 to Thunder.

Vitality player of the match was awarded to Manchester Thunder's Millie Sanders.

With the return of the home games next week, Severn Stars travel to the CBS Arena in Coventry to take on local rivals Wasps on Saturday 12th February. Buy your tickets to Severn Stars home games in Worcester and Gloucester here and Manchester Thunder's home matches here.