Rhinos and Storm are now level on 21 points after Friday's result (image: @Merrick_marthew)

Leeds Rhinos returned to Hull’s Allam Sport Centre and with that got back to winning ways with a knife-edge 49-48 win over Surrey Storm.

Jade Clarke got the game underway with the first centre pass, Sigi Burger patiently took it to goal to open the scoring. Rebekah Airey tipped the ball early for Rhinos and shortly after a contact was called against Proscovia Peace and Rhinos transitioned down the court.

The ball was then forced off the backline and possession was back in the hands of Surrey Storm, Francesca Wells got her first at 1-1 before Amelia Hall placed a high ball over into Burger.

Rhinos remained patient despite strong defensive pressure from Storm 3-2. Burger did well again to keep possession and got herself another 5-4.

Hall, Clarke and Burger connected quickly but the ball didn’t go through the net, Storm transitioned 5-6. Clarke remained calm on the next centre pass and Brie Grierson spotted Burger under the post 6-7.

Michelle Magee earned herself the ball and Burger rewarded her side 7-7 with two quick goals, matched by Proscovia who then levelled it for Storm 9-9. Leah Middleton came out with a turnover which gave Storm possession, Wells netted another 9-10.

Too much was put on the ball into Proscovia allowing Rhinos to transition down court patiently, Grierson was short on the shot and Storm quickly transferred down the court. Hall found Burger to level the score.

Grierson and Hall combined well and Burger held off Middleton and got one more for 11-12. A long quick ball was placed into Burger but it didn't quite land, Storm finding Wells to make it 11-14 and Parsons popped one over into Proscovia to extend the lead.

Rhinos remained calm and patient, but after another missed shot and a quick transition from Storm the away sides saw the lead grow to five. Rhinos defence assisted the centre pass transition and Grierson found Burger to begin the recovery.

Airey did well on the body of Proscovia and after a quick tumble to the floor, the contact call was made. Rhinos transitioned well and rewarded Airey's efforts with a goal at 13-17. Proscovia added another with 30 seconds remaining to end the quarter at 14-18.

Mikki Austin took the centre to recommence the game, Jade Clarke quickly tipped the ball but it remained in Storm hands.

An attacking contact was called which saw possession turn to Rhinos and Sigi Burger scored two quick goals for 18-16.

Rhinos applied lots of defensive pressure which forced Storm to take their time with both sides missing shots early in the second. Vicki Oyesola tipped the ball and seconds later Airey earned her side a turnover.

Felisitus Kwanga turned possession for Storm but Rhinos earned the ball back, Clarke going to ground but sprung back up for 17-18. Emma Magee found Burger under the post from the transverse line to level the game at 18 all.

Grierson combined well with Hall who then quickly fed Burger for 19-19 and more quick hands from Clarke allowed Hall to find Burger again.

Rhinos continued to apply tight defensive pressure and the ball was forced off the backline for Storm; an attacking contact was then called within the Rhinos circle, Proscovia finished that passage of play whilst Airey was cautioned.

Oyesola then picked up the rebound, Hall passed a quick ball off to Burger and she remained calm to extend the Rhinos lead to four. Another attacking contact went against Storm giving the home side possession, which they quickly coughed up.

They transitioned well and Clarke held off Austin on the circle edge, but the ball was quickly back into Surrey Storms possession.

Sienna Rushton took the backline and Hall quickly offloaded into Burger 23-27. Time denied either side a final goal of the half at 23-27. 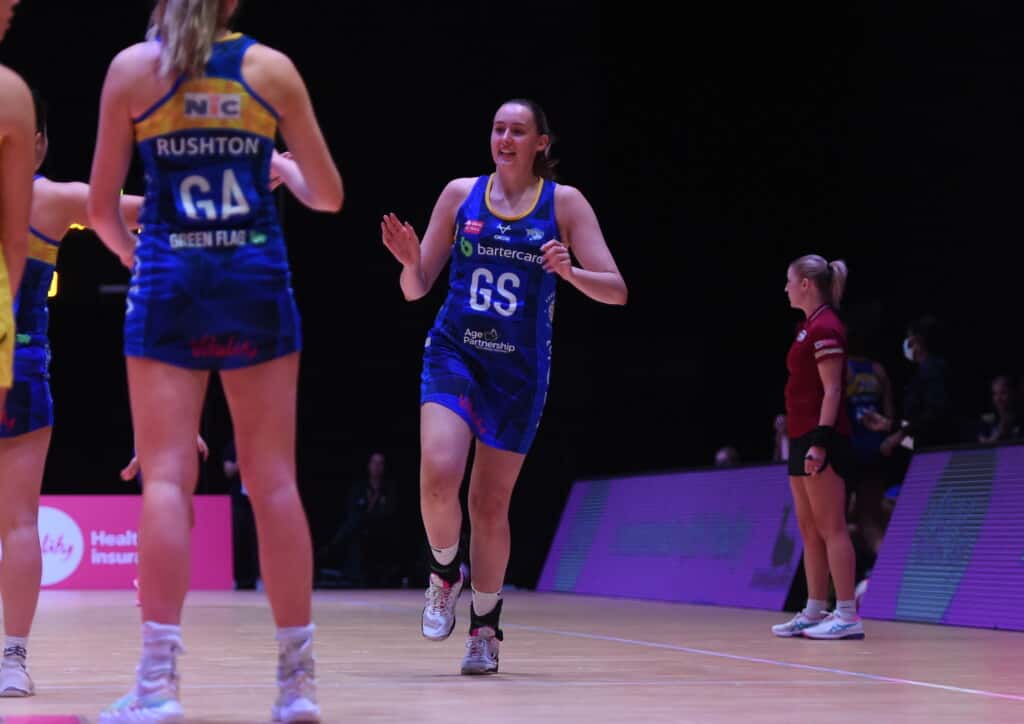 Middleton turned over Rhinos' first centre pass of the second half and it was Proscovia who got the first goal of the quarter.

Storm regained control but were forced upon a three seconds. Burger added one more 25-28. Rushton turned over another ball but this time it wasn’t converted 25-29. Rushton connected with Hall and put another one on the board 26-29.

Hall remained strong on the circle edge allowing her to find Burger 27-30. Austin threw one off the sideline and Rhinos took the ball. Parsons then moved into C for Storm with Candappa taking to the court in WA pushing Austin to the bench. Burger 28-30.

A period of back and forth quickly occurred but it was Burger who recomposed to the crowds delight seeing the deficit reduce down to one. Hall found Burger from the pocket and then Rushton and Burger combined well inside the circle.

Rhinos transitioned quickly, but a missed shot gave Storm possession. Rhinos' whole team effort quickly saw them regain possession and they finished it with a goal.

Proscovia missed a shot but sank it on her second attempt, Rushton adding another one to her personal tally before Rhinos earned a backline after whole unit defensive pressure.

Hall found Rushton who connected with Burger under the post - the shot was missed but a penalty was given, allowing Burger to pops it through on her second go to level the score. Clarke was given a warning for Rhinos and Proscovia added another.

Magee was called for footwork for Storm, Airey took the ball with five seconds remaining. Clarke found Burger under the post with a feed from past the centre circle but time just denied them adding one more to finish the third quarter.

Clarke got the final 15 underway, finding Burger who added one more at 36-38. Burger remained strong under the post and continued to add to her sides tally, popping out from between two defenders and added to the board 38-40.

Oyesola turned over ball for Rhinos who then took the sideline and patiently built on the ball, Rushton missed the shot but Hall picked up the loose ball.

Storm regained possession and Proscovia extended the gap to three 38-41. Rushton put a high ball in the circle for Burger 39-41. Rhinos defence worked well together and came out with the ball, but after an offside call the ball was back with Storm.

An attacking contact was called against Rhinos attack but Airey turned over another ball to regain possession for her side, Burger finished it 40-42. Rhinos forced Storm wide and off the sideline. Burger split to bring it to one 41-42.

The ball fell off the backline for Rhinos but Magee came through with the turnover. Rushton drove the baseline to level the game at 42-42 to the crowds delight. Hall remained balanced to find Burger under the post 43-43. Rushton held strong on the transition which saw Hall and Clarke work well on the circle edge.

Rushton put the ball through the net but an offside call was made so it did not stand. Storm transitioned and converted Rhinos centre pass 43-45. Proscovia remained successful 43-46. The ball found Burger again who picked up her own rebound, 44-46. Rushton put a quick ball into Burger 45-47.

Airey turned over ball from the body of Proscovia. Rhinos transitioned down court and it was Rushton who added one more 46-47. Rushton missed the shot but Burger picked up the rebound and put it through the net 47-47.

The crowd really started getting behind their home side with just over one minute remaining. Grierson re-entered the game at GA. Hall placed a high ball over into Burger who held off Middleton 48-48. Oyesola tipped the ball but Storm have possession. Oyesola came out again to earn back the ball.

Burger held strong and put one final goal through the net with seven seconds remaining 49-48. It was a Rhinos centre pass to end the game but time denied one more goal. Rhinos took the win 49-48.

You can also watch the highlights from all the games in the VNSL 2022 season HERE. Buy tickets to support Leeds Rhinos at their home games here and support Surrey Storm at their home ground by buying tickets here.