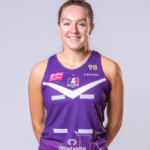 Rhinos netball faced reigning champions Loughborough Lightning away at the Sir David Wallace sports arena on Monday 4th April. After a postponement in round one for Rhinos netball this was the first time in the 2022 season that these two sides had met.

Loughborough commenced the game with the first centre pass, despite tight defensive pressure from Rhinos defensive unit Cholhok finds the net. Sigi Burger shortly after gets her first of the game 1-1. After a quick centre pass from Loughborough, Rhinos respond and Hall keeps control of the ball allowing Burger to get her second. Rhinos defensive unit cause a held ball within the Loughborough goal circle, a patient transition saw Burger add another to the tally. Despite strong defensive pressure Burger came out with the ball, patient play from Clarke building the passage of play and a well connected shooting duo of Grierson and Burger allowed Rhinos to keep the score board ticking. Keenan remained strong on Cholhok and was just centimetres away from the ball, Loughborough stay strong and take a turnover seeing them pull a two goal lead.

Rhinos picked up ball from a Lightning centre pass, Grierson took a quick penalty within the circle to feed the ball into Burger under the post. Quick hands from Clarke saw Burger add one more to bring the game level again at 7 a piece. Rhinos remained patient on the ball down court, Clarke showed her vision again down court feeding Burger who keeps the game level 9-9. Walker moved into the WD position which saw Magee move into the GD bib with Oyesola moving to the bench. Cobden picked up ball from a Rhinos centre pass which allowed Cholhok to net another giving Loughborough a two goal buffer 14-12. Hall was straight out on the centre pass and after turning possession on the next its back level at 14 all. Keenan remained clinical and took another turnover, Rhinos built on the transition and ended the first quarter with a two goal lead 15-17.

Clarke got the second quarter underway, Hall kept control of the ball allowing Burger to continue her shooting success. Tight defensive pressure from Rhinos forces Loughborough wide and Cholhok out of the circle up to the sideline, Keenan was unlucky on the rebound but Cholhok was too tall on this occasion. Rhinos earned a backline after there was too much on the pass, Burger remained strong under the post to maintain Rhinos lead 17-19. Burger continued displaying her shooting masterclass under the post but Cholhok responds with another goal for Loughborough. Grierson kept the ball on court however Loughborough soon regain possession and Cholhok gets another. Rhinos transitioned quickly down the court, Lightning tipped the ball but Walker quickly picked possession back up with Burger taking it to goal 19-22. Lightning turned over ball and after a contact call against Keenan Rhinos held just a one goal lead 22-23. Loughborough converted their centre pass and after a turnover on Rhinos centre pass it was Loughborough who had the lead 24-23. Rhinos had a couple of missed shots, after quick transitions for Loughborough they extended their lead to four 27-23. Cobden earned herself a turnover and despite a tip from Magee Cholhok added one more 30-23. Oyesola and Keenan combined well to deny Cholhok of the ball, Rhinos started to transition well but a footwork call further down the court saw Loughborough regain possession, Keenan did well to make sure that they didn’t end the game with one final goal. At half time Rhinos were behind by seven goals 34-27.

Clarke got the second half underway and Rhinos seven players on court remained unchanged. Clarke instantly earned herself a turnover, she spotted Burger free in the circle who took the ball to goal. Lightning spotted the fight back and Williams east herself a turnover which Cholhok then went onto take to goal. Tight defensive pressure from Oyesola and Joseph being on the floor couldn’t stop Cholhok from her shooting successes. Cobden earned herself another turnover allowing Lightning to hold onto their seven goal lead 37-30. Time was paused for an injury to Loughborough’s GS Mary Cholhok, after an extended pause in play she left the court which saw Emma Thacker enter the game at GS. Loughborough were unsettled after this pause in play and only put two goals on the board whilst Rhinos added eight, however the game remained at six goals 44-38. Keenan took a turnover just outside the circle and Grierson added one more reducing their deficit to five 45-40. Magee then took a turnover and Burger was spotted home alone under the post 47-42. The third quarter finished 49-43.

Final 15 got underway with a Loughborough centre pass, an offside call saw the ball switch into Rhino hands. A missed shot saw the ball move back down into the Lightning circle with Thacker taking the first goal of the quarter 50-43. Strong defensive pressure from Rhinos, and a patient transition and build, saw Burger finish it 50-45. ‪Rhinos took a quick‬ goal and then Keenan picked up a rebound, contact was in the Rhinos shooting circle which saw Burger get another 52-47, but the gap remained five. A couple of quick goals from Loughborough didn’t stop Burger from adding one more to her tally 54-48. Magee earned herself another turnover but the ball was shortly back in Loughborough's possession. Rhinos remaining resilient and Magee continued and forced the ball off the backline, this time the transition was patient and ended with a Rhinos goal 55-49.‪ Magee and Clarke then picked up a caution and after more patience from Rhinos in attack ‬Hall spotted Burger under the post 57-51. Both sides remained adding on goals making it difficult for Rhinos to reduce the deficit. Burger home alone for one more 58-52. Burger remained strong under the post despite contact 60-54. Keenan tipped the ball disrupting Loughborough’s flow. Thacker, however, was unfazed and added another for home side Loughborough Lightning 61-54. Rhinos denied Loughborough of one final goal and the game finished 62-54.‬‬