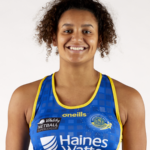 Severn Stars welcomed back a sell-out crowd to their second home at Oxstalls Arena in Gloucester on Saturday, February 26.

Both Stars and Team Bath started well but it was the away side who took the lead in to the second quarter after leading 14-10. After leading in the first quarter, Bath retained their high energy and intensity despite a comeback from Stars and headed into the break leading 25-22. Stars grew into the second half and increased their threat but despite having a marginal lead of 36-34 at the end of Q3, it was Bath who converted their chances in the final quarter to take a 48-45 victory and all three points.

Stars new signing Catherine Tuivaiti started her first game in front of her home fans but left the court before Melissa Bessell’s side recorded their first goal. The in-form Isabelle Eaton replaced Tuivaiti and wasted no time in taking her chances after finding her side 3-0 down. Both herself and attacking partner Paige Reed began to grow into the game and overturned a three-goal deficit to draw the game level at 7-7. After four quick fire goals from the Blue and Golds, defender Lucy Herdman denied Bath the opportunity to increase their lead with a vital interception. An end-to-end opening quarter drew to a close as the away side took a four-goal lead into the second quarter with the score at 10-14.

Bessell looked to close the gap in the second quarter after making a double substitution which saw Nicole Humphrys and Katie Harris replace Eaton and Dee Bolakoro. Humphrys injected her high energy and intensity into the game, making a crucial interception in the mid court and overturning the play. Stars shooter Reed drew her side level at 18-18 for the first time in Q2 after two quick successive goals. Despite danger from Bath’s attacking duo, Bessell’s Stars kept themselves firmly in the game as Reed once again drew herself level, netting the 20th goal. Stars began to find their rhythm in the second quarter as captain Liana Leota produced a series of quick fire passes between the mid court before firing the ball into the arms of Reed who converted the shot. The Blue and Golds led 25-22 at the break but Bessell’s side were still firmly in the game and had it all to play for in the second half.

Harris and Reed came out in the second half firing as the Stars recorded two goals in quick succession to reduce the deficit to just two. The home side put on a display for their fans in the third quarter as the Stars were quick to turn over play with Harris there to convert the goal. As Bath had a slim lead of only one goal, defender Summer Artman put a stop to their attack after outjumping her opponents to collect the rebound and recycled the ball for her side. Stars took a 33-32 lead in the match after Harris converted back-to-back goals for Bessell’s side. Minutes later, Reed doubled their lead after positive build up play between mid-court players Leota, Humphrys and Bethan Dyke.

Heading into the final 15 minutes, Stars led 36-34 with a narrow lead of just two goals thanks to the clinical shooting from Reed and Harris. With the score level at 37-37, Artman made an important interception to deny the Blue and Golds from regaining the lead early in the final quarter. The Stars regained the lead after Reed drew a foul and converted a long range shot before doubling it to draw a two-goal lead. Bessell looked to freshen things up heading into the closing stages of the match as last game’s Stars’ player of the match Dyke made way for Bolakoro who slotted into the defence. After a fight back from the away side, Reed was there again to draw her side level with just minutes to go.

Despite a positive second half from the Stars, Bath fought back and scored three goals in the final stages. The Blue and Golds came out on top to take all three points and get back on track after securing a 45-48 victory.

Humphrys earned Stars’ player of the match after an energetic and lively performance in the mid court.