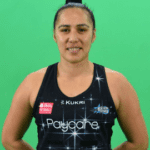 Severn Stars encountered a close first half with 2021 champions Loughborough Lightning, but were unable to hold on as Lighting took the Win over Stars.

Severn Stars were once again at home playing at the University of Gloucestershire arena on Saturday 19th March. A welcomed return for Cat Tuivaiti who started the game at Goal Shooter for Stars, who brought her signature no-look passes and flare that everyone has been waiting for. There was nothing that separated the sides in the first quarter, but it was Stars who took a one goal advantage over Lightning with Katie Harris sinking a goal on the buzzer bringing the score to 18-17.

Issy Eaton replaced Tuivaiti, and Nicole Humphrys replaced Iman Thomas in the second quarter. Both sides were scoring well, but it was two consecutive turnover from Lightning on the Stars centre passes which gave Lightning a 5 goal lead ending the first half 31-36.

Lightning were the quickest to put their gear up a level in the second half as they soon pulled away to an 8 goal lead over Stars. Despite a flurry of intercepts from Severn Stars, the home side were unable to capitalise and went 12 goals down to the visitors ending the third quarter 43-55.

Both teams made an array of changes to the seven on court. Humphrys made an early intercept in the opening of the fourth quarter which flew down the court to Eaton who scored, but some quick passages of play from Lightning saw them extend their lead over Stars. Despite a late turnover from Stars, it was not enough to close the gap and visitors Loughborough Lightning came away victors with the final score 56-70.

Severn Stars Player of the match Lucy Herdman said “It was a physical game from both teams out there tonight both teams wanted the win tonight. We will have a very hard week of training this week before our trip up to Scotland next week when we face Strathclyde Sirens”

You can watch the highlights from all the games in the VNSL 2022 season HERE. Buy tickets to support Severn Stars at their home games here and support Loughborough Lightning at their home ground by buying tickets here.