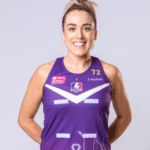 Wasps came into this final home game with confidence, on the back of three consecutive wins which have lifted Mel Mansfield’s side up to eighth in the league table.

The team channelled this confidence into their first-quarter performance, with an offensive display from Rachel Dunn and Lucy Parize that Lightning struggled to deal with.

However the visitors found their feet within minutes and the first quarter turned into back and forth affair, the lead changing hands numerous times.

With the game opening up, Wasps captain Josie Huckle became increasingly vocal in her attempts to organise her side, to great effect. The hosts shored up their defence and began to win interceptions, which in turn enabled them to take and retain a narrow 2 point lead.

Wasps went into the first break 16-14 up over Lightning, a score-line reflective of the home side’s impressive opening.

Perhaps frustrated by Wasps’ resilience in the first quarter, Lightning came out with a point to prove in the second. The offensive combination of Thacker and Clark allowed the visitors to battle back into the lead with a score of 18-19.

Wasps however were unfazed by this burst of energy from their opponents and gathered themselves rapidly to cut Lightning’s momentum and turn the tide of the game. Fast-paced combination play from Player of the Match Iona Christian and Ella Powell-Davies allowed the hosts to storm into a spectacular 6 point lead at 25-19.

Lightning seemed shocked by this surge of attacking activity from the home side, and initially struggled to stop the flow of possession across the court.

However, Sara Bayman’s side had only lost once all season, and proved their pedigree by closing the gap within minutes. Lightning, true to their name, passed the ball rapidly to rack up unanswered goals and successfully retake the lead to end the half 27-28 up.

Quarter three was a tighter affair, as the dominant Lightning attempted to pull ahead only for Wasps to keep both them and the game within reach.

The hosts couldn’t afford to make a mistake, as Lightning were too clinical to be allowed space and time to break. A number of huge interceptions from Rachael Fee and Ella Powell-Davies helped break the visitors’ momentum and enable Wasps to maintain a 2 goal gap in their pursuit of Lightning.

Unfortunately for the home side, their concentration was broken with just two minutes to spare, as a few misplaced passes and missed shots allowed Lightning to tear open a five-goal lead heading into the final break in play. It looked as if the 2021 Vitality Netball Superleague champions were on course to cruise to victory with just one quarter remaining.

The pattern continued at the start of the period, with Lightning racking up two more goals to lead by 7 points, giving the home side a mountain to climb.

If Wasps have probed anything this season, however, it is that they can never be counted out of a game no matter the score-line.

As they have done numerous times during the season, the hosts flew into the final quarter with a point to prove and dogged determination.

Buoyed by a brilliantly vocal home crowd, Mel Mansfield’s side stretched the court and gave Lightning a taste of their own medicine with some dynamic, high tempo attacking moves.

Iona Christian caused problems for the away side with her erratic movement and range of passes, which helped feed goal shooter Dunn and set up a thrilling finale as Wasps closed the gap on their opponent to just two.

With a minute on the clock and momentum firmly in Wasps favour, it seemed as if the impossible comeback could be completed, however, Lightning were mature in their controlling of the game, slowing down the pace and interrupting the hosts’ flowing moves with a number of key intercepts.

As a result, the champions sealed all three points with a narrow 52-54 victory to further their bid for consecutive titles. By contrast Wasps three-game winning run came to an end, although the team did themselves proud with a passionate performance in their final home game of the season.