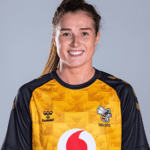 Severn Stars won for the first time since opening day as they defeated Wasps 56-47 in the final game of the Spring Showdown.

Wasps and Severn Stars both went into this game determined to bounce back from their defeats on the first day of Spring Showdown, and that competitive spirit shone through in a tight, tense first quarter.

Wasps took the lead briefly at 4-3, but Severn Stars racked up a number of interceptions to turn the game on its head and finish the quarter 13-11 up, an advantage they would maintain for the rest of the fixture.

Stars muscled their way to a strong lead in the second quarter, increasing their physicality and making their presence known across the court.

Wasps struggled to deal with the aggressive defending of Summer Artman and Lucy Herdman in particular, and made the tactical decision to switch out Lucy Parize for Gezelle Allison to counter the strength of the opposition.

Allison combined well alongside Rachel Dunn in attack to temporarily close the gap and threaten to level the score, but ultimately Stars adapted their style of play and stretched their lead to 5 points at the half-time break.

Once more Wasps rallied after the interval and built up momentum, Iona Christian producing a number of fine feeds to help close the gap to 31-29, but Stars continued their pattern of weathering Wasps’ bombardment before fighting back at the end of the quarter.

They capitalised on Wasps’ mistakes and dominated interceptions and turnovers, overall achieving 11 interceptions compared to the opposition’s four, which was the crucial component to their success in battling back time and time again.

Despite this frustration, Wasps refused to give up and to their credit fought back once more to close a five-point gap down to just two, with a score-line of 46-44 in favour of Stars.

In a thrilling closing chapter of the Vitality Netball Superleague Spring Showdown 2022, Stars utilised their strength to hold Wasps at bay and prevent an incredible comeback from the Coventry-based side.

Rachael Fee was forced off injured in the final few minutes of the heated contest, as Stars stretched their lead and won the game 56-47 to register just their second win of the season.

Wasps turn their attention to another double header next weekend against league leaders Manchester Thunder and Leeds Rhinos, whilst Stars take on Team Bath.

The Gilbert Player of the Match was Severn Stars' Bethan Dyke.

You can also watch the highlights from all the games in the VNSL 2022 season HERE. Buy tickets to support Severn Stars at their home games here and support Wasps at their home ground by buying tickets here.