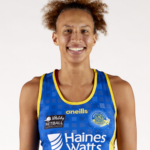 Team Bath maintained their winning start to the season as they battled past a resilient Wasps Netball side to clinch it 44-39.

Bath started the game strong in round three of the Vitality Netball Superleague, taking the lead quickly through Kim Borger.

A dominate first quarter saw Bath open up a five-point lead which Wasps struggled to close in on. The scores sat at 12-7 to Bath at the end of the first quarter.

Sophia Candappa used the break to clarify with umpires and aid Wasps responses on the field.

Bath stretched their lead during the second quarter, going 12 points ahead at one stage. Wasps found it difficult to make connections through the court and push through Bath’s midcourt with Serena Guthrie proving to be a tough opponent.

The second half saw Mel Mansfield’s side make a number of changes. Wasps energy on court was reignited.

The show of depth in the squad proved to be a good match for Bath with quarter three adding 13 points apiece.

Wasps really opened up play moving the ball around the court and putting Bath’s victory in doubt, with Wasps scoring 13 points to Bath’s eight. Despite the renewed energy, Bath held on to take the points.

Wasps showed great resilience and grew throughout the game. Bath were their toughest opponents yet but they’ll take great pride in their fightback and comfort in the knowledge that this team has the ability to compete with a so-far undefeated Bath side.

Captain Sophia Candappa said: "Disappointing start for us today. We need to go back and look at where we can make improvements. One real positive is that we finished really strong today. Really proud of the grit, determination and passion that the team showed."