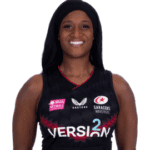 In round two, Leeds Rhinos Netball faced a ferocious Saracens Mavericks side with both teams were fighting for their second consecutive win.

The first quarter saw a lot of hustle and bustle where both teams were trying to find their feet. Rhinos made a turnover on the first centre pass whilst Mavericks took two minutes to put themselves onto the scoreboard. Vicki Oyesola started very strong for Rhinos gaining two intercepts within the first three minutes.

Within the first quarter, Rhinos utilised their strong attacking unit with the telepathic combination of Grierson and Wallam being very evident, as the quarter progressed the feeds from the mid-court became more confident and accurate, putting Wallam in prime shooting position.

With two minutes remaining, Tuaine Keenan went down with an ankle injury. Paige Kindred entered the court at goal keeper forming instant combinations with Oyesola. Rhinos ended the first quarter one goal down, 10-11.

Rushton entered the court for Rhinos with four minutes left of the quarter after an injury to Wallam and confidently sank her first shot. Rushton quickly formed connections with Rhea Dixon and Rhinos levelled the score to 20-20. After an attacking contact against Rhinos, Saracens converted and at half-time Mavericks took the lead 20-22.

After half-time, the game was back and forth as both sides were cautious as they were looking to settle into the second half of the fixture.

After a goal from Rushton, Rhinos turned over the ball and after another goal from Rushton, the score was back level at 22-22. After a frantic start to the third quarter, both teams started to settle but Rhinos then lost Fionnuala Toner to an injury. This saw Emily Hollingworth enter the court at wing defence. Despite three injuries, the youth of Rhinos stayed composed and ended the quarter two goals behind.

Entering the final quarter, all players were still hustling for every ball as both teams fought for their second win of the season.

A partnership between Clarke and Rushton developed despite the dominant defensive pressure by Mavericks' Razia Quashie. Paige Kindred took a flying intercept which the team took to goal, increasing momentum within the squad.