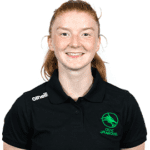 Saracens Mavericks saw off a competitive Dragons team to win their second game on the bounce in the second half of the season. Those coveted three points leapfrog them over Team Bath and bring them level with London Pulse in the top 4.

Head Coach, Kat Ratnapala, gave credit to the Welsh-based team before conceding that her side “made some silly mistakes” in a game where the Black and Reds, surprisingly, won just one quarter.

While delighted with the whole-team performance, the Coach gave special mention to Britney Clarke, Beth Ecuyer-Dale and Aliyah Zaranyika: “I thought she [Britney] did phenomenally well and Beth and Brit’s connection throughout that game was fantastic. Beth can thread the needle and she did that really really well today. And Aliyah as well, she’s just coming into her own in that position in Wing Defence so that’s great to see.”

Beth Ecuyer-Dale was awarded Gilbert Player of the Match in a “well contested game” where her side “got smarter”.

In this 12th round of the VNSL Mavericks chalk up their seventh victory of the season and make it 2 from 2 in the second half of fixtures. They are a team to be feared as they head to the Spring Showdown next weekend.

The Hertfordshire team picked up where they left off with the same starting seven as those who lead the charge against Wasps less than a week ago. The away team brought an attacking style of play to the Hertfordshire Sports Village and, according to Dragons Captain Nia Jones, “matched up really well.” This was most apparent in the match-long pressure Dragons’ Keeper, Greene-Noel, applied to Britney Clarke in the Mavericks’ circle. The first quarter ended level, 13-13.

Celtic Dragons began the second quarter strong, as indeed they began each quarter. The Green Army netted 3 goals unanswered but an interception from Quashie heralded the emphatic reply: 4 goals unanswered!

Now on the backfoot, the Dragons made a couple of changes. Most surprising was taking off an uninjured Greene-Noel for, it transpired, a talk with Dragons’ Head Coach, Titmuss-Morris. Instead of returning to court, Clarke’s worthy rival stayed off for the closing 5 minutes of the quarter, during which time Mavericks embarked on a goal-scoring rampage. The Black and Reds went into the half time break with a 10-point lead.

With the Trinidad and Tobago International back in Clarke’s face, Celtic Dragons nibbled into Mavericks’ lead, only to suffer Mavericks’ reply once again.

In the final quarter Mavericks demonstrated the depth of talent in their squad as they brought on (birthday girl) Gabby Marshall, Georgia Lees and Yasmin Hodge-England.

The Cardiff side pushed the two times champions but weren’t able to maintain the pressure they asserted in the opening minutes of each quarter. A disappointing outcome for the team whose second victory of the season continues to elude them.

In next weekend’s Spring Showdown Mavericks will be looking to maintain a clean sheet against Severn Stars and London Pulse as they play on Saturday 16 and Easter Sunday. Mavericks’ postponed game against Team Bath has been rescheduled for 29 April.