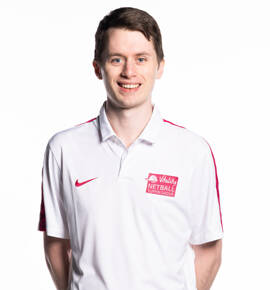 I remember being dragged(!) to netball matches and training sessions when I was very young, but it wasn’t until I started university that I took up umpiring and passed my Beginner Award. I enjoyed it so much that just I carried on from there!

One of my favourite moments was back in 2012 when I umpired at the European U16 Championships in Glasgow. I’d only passed my A Award the previous year, and there was a great crowd watching the matches – the atmosphere was amazing.

Preparation really starts early – sometimes even the day before. You have to make sure you eat well and drink enough water the night before. On the day, I try to arrive at the venue in plenty of time, at least two hours before the first whistle. I find my co-umpires and start running through the protocols in my mind to get focused. We often have a strict timetable to run to which can help you plan things out. Court and player checks happen well in advance, which leaves plenty of time for a proper warm up – I like to listen to music as well, which helps me focus.

There are just too many people to choose from. Sometimes being an umpire can make you feel isolated, as you often travel to and from matches on your own, but the support you get from fellow umpires, mentors and volunteers, both on and off the court, is incredible.

I have a set playlist that I listen to for every warmup in the season. The tracks themselves aren’t really that important – it’s the consistency from game to game that helps get me in the right frame of mind.

I have many! However every one is a learning point and makes me the umpire I am today.

I love umpiring different teams and having the challenge of dealing with new tactics and playing styles, especially at this level. I also like it when you have travelled for miles and yet you know there will be friendly face umpiring on the other side of the court with you. At Superleague you also get a dedicated team of Match Bench Officials which means you can really concentrate on umpiring.

I would say try and take as many opportunities to umpire in different situations as you can. Don’t just stick to one league or area – try umpiring some games elsewhere. This will widen your experience and expose you to new teams and different styles of play. Tournaments are great as they have lots of teams in one place and you have the added pressure of everyone wanting to win, which can be a real test! Try to get a mentor you trust to watch you umpire and really listen to their feedback. At a higher level we have regular assessments as well which are really helpful as an independent check on your progress. Again, take the feedback on board and try to put it into practice in your next match.