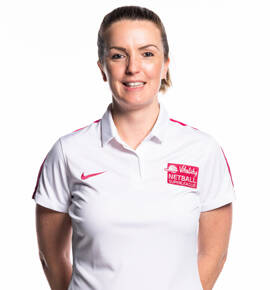 I started umpiring when I was 16, my mother was the netball coach at my school and rather than sitting on the side line whilst she coached the other teams, I picked up the whistle and started umpiring.

On court – Umpiring in front of 10,000 people and the New Zealand Prime Minister in Auckland as part of the first Constellation Cup in 2010 (a record netball crowd at the time).

Off court – making many special friends home and abroad through netball and umpiring.

I always eat two hours before any game, and must have a cup of tea once I arrive at a venue!

I have the same warm up routine for each game, and must do it in the same order each time!

I use the same whistle and yellow hairband to signal the centre pass for every game!

To continue to umpire at the top level of the game nationally and internationally – the game is progressing at a phenomenal rate, and to be involved is a privilege and something I don’t take for granted.

I’ve had so many people contribute to my journey as an umpire – assessors, mentors, coaches, players and fellow umpires. The biggest influence would have to be my mother who got me into umpiring in the first place – she is a fantastic coach and umpire and without her I would never have picked up a whistle all those years ago!

I have a very eclectic mix on my workout playlist, and it is difficult to narrow down to one song. Currently The Foo Fighters are being played quite a lot!

Game one of the 2016 super league season – I was running back to the centre pass after a goal had been scored and my whistle flew out of my hand and off the side of the court (all live on TV!) – luckily my fellow umpire noticed and blew the whistle for the centre pass whilst I retrieved it!

Being involved in the highest level of the sport you love – as a player, coach or official – is a huge honour and something I am thankful for. Being able to umpire the fantastic athletes the Superleague players are on a weekly basis is probably the best part.

Take every game as a learning opportunity – set goals for each game and self-analyse how you performed against those objectives at the end. It doesn’t matter if this is a local, regional, Superleague or international game. And most of all, have fun and enjoy your umpiring!