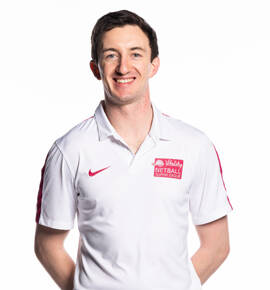 Being selected for 2018 VNSL

I used to play High 5 for my Mum’s club at U11, and then took up umpiring more and more to stay involved in the sport as my playing opportunities as a male became limited.

In the past year I have umpired in Australia, Canada, and Northern Ireland. Travelling and meeting new people whilst doing what I love has been a wonderful experience full of memories that I’ll never forget!

I don’t have any superstitions, but my preparation, nutrition, and warm up have to be precise starting at least the day before.

I want to be the best umpire I can be. Hopefully that means umpiring the highest possible standard of matches as an international umpire.

It has to be my parents, both for introducing me to netball, and for the ongoing support in everything I do. Other than that, Kim Burns and Elaine Douris were enormously helpful in mentoring me to my B and A awards, and likewise Heather Gleadall more recently.

The first track on my warm up playlist is ‘Till I Collapse by Eminem and Nate Dogg.

I missed the last six weeks of last season after tearing my hamstring whilst putting my sock on… I don’t think I’ll ever be allowed to forget that.

The opportunity to challenge myself and to allow our elite netballers to showcase their incredible skills and athleticism.

Put in the hard work and it will pay off! Watch and talk to other umpires as much as possible. Absorb what is useful, disregard what is useless, and add what is uniquely yours.