Kwangwa during the Vitality Super League match between Surrey Storm and Saracens Mavericks at Studio 001, Wakefield, England on 14th January 2021.

Felisitus Kwangwa is a household name in African netball after an iconic Vitality Netball World Cup 2019 performance with Zimbabwe, who she now captains.

The Gems gate-crashed the tournament to finish eighth in what was their debut at the competition and Kwangwa was very much at the heart of it.

The Zimbabwe squad won over many neutral fans in Liverpool as well as putting the sport on the map in their native country. Now, Kwangwa is attempting to do so again in a new setting.

Kwangwa broke barriers this season by becoming the first Zimbabwe international to play in the Vitality Netball Superleague (VNSL). The defender joined Surrey Storm in the 2021 signing window.

In fact, this move might have happened directly after the tournament when Director of Netball Mikki Austin approached the Gems player in the mixed zone after a World Cup match.

Impressed with what she saw, Austin wanted to bring Kwangwa to Surrey Sports Park but was unable to due to Zimbabwe’s position in the INF World Rankings.

This all changed, however, as the Gems moved up as a result of their 2019 performances and she is now a fully-fledged member of the Storm ranks.

“She told me after a game we would talk and then people told me someone was looking for me. I thought ‘that’s Mikki’. I sent her an email and that’s when we started to talk, that’s when she explained how things work this side and I really understood that.

“I was heartbroken when I couldn’t come. I lost hope. The World Cup was over and people might have forgotten about everything, people will move on with their lives. I didn’t think there was going to be another chance for me to be seen.

“I was still thinking about it a year later so then I think I decided to check our rankings. That’s when I realised, we’re sitting in twelfth which is good for us. I signed a contract with an agent and three hours later Mikki said they still were interested.

Kwangwa started playing netball in 2005 when she was at primary school in Zimbabwe after one of her teachers encouraged her to play. The 25-year-old was torn between the sport and athletics, stopping to focus on the latter all together at high school in 2008.

It was only a few years later when her language teacher got her back into it because of her height. From there, she competed in Youth Games and U20 internationals for her country before making her senior debut. 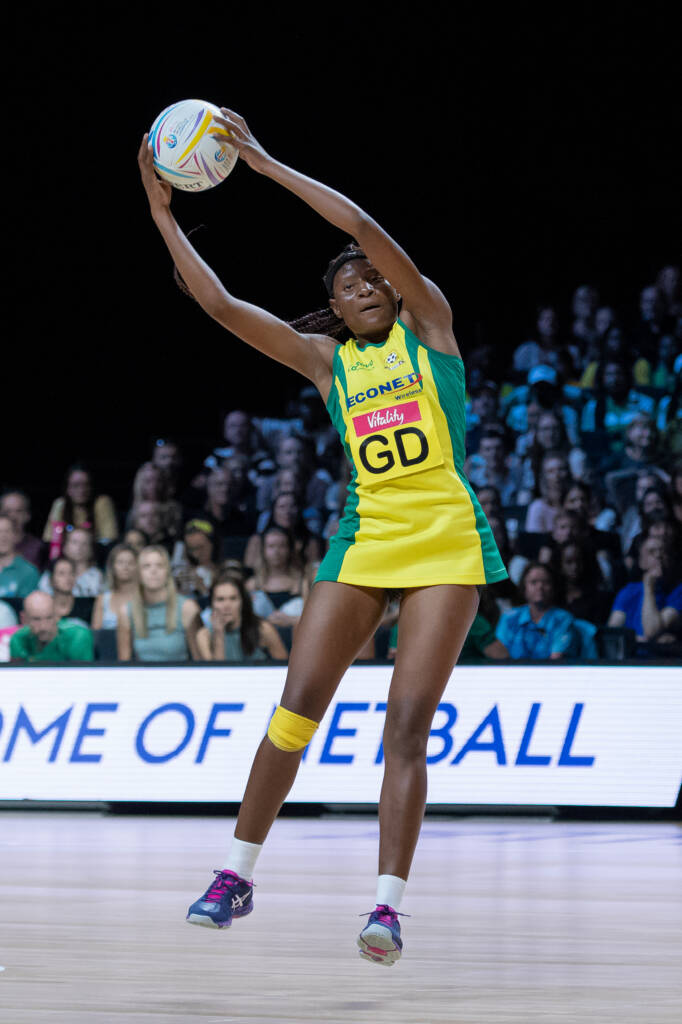 Now, she resides in the VNSL and has proven a popular figure at Storm since her arrival. It has been a big change for Kwangwa, though, but the move was an easy decision to make despite the challenges that come with it.

“It was an opportunity for me so it wasn’t a very hard decision at all. I was scared at first but the team were talking to me even before I flew to England. I thought that these were good people and there was no need for me to be scared.

“The fact I was staying somewhere I’ve never stayed in my life, of course I was going to be scared. It’s really hard to find a new life in a new place that you’ve never been to before. Because I knew Mikki before and she was there for me, it made me comfortable and I knew I was in the right place.

“I can’t say it’s a team, it’s more of a like a family. I’m miles away from home but I’ve never felt homesick. They’re so lovely, they’re so caring and I’m so happy to be among them. So, you will be a bit scared but I can say I feel very comfortable.”

Kwangwa is now the only Zimbabwe player currently representing the country in any of the top three netball leagues in the world.

She is making a huge step forward not just for herself but for her fellow countrywomen back home. The Storm star feels it’s important to have those role models in a country where netball is still emerging.

Imports are now a huge part of the VNSL and Kwangwa is certainly not alone. Fellow African arrivals such as Mary Cholhok, Joyce Mvula, Sigi Burger and more are all making their mark on the 2021 season.

“It’s quite an honour if I may say. I’m the current Zimbabwe captain so I think this can be a motivational tool for everyone else in my team who I know are very capable. It’s only a matter of time and I believe, in two or three years, we will have a lot of Zimbabweans here.

“I hope to inspire them. I am always getting messages asking questions about where they need help and I’ve always found time to talk to them. I always say you need to do something you’re really passionate about. I hope it will help some more girls in their lives.

“Having players from different countries is very important, the way we do things makes a big difference. A team comprised of players with different skills brings something beneficial for a team. It helps improve netball in the UK but, now that I’m here, back home too.

“I have learnt a lot of new things which I can teach some of my teammates back home. That’s where you get new ideas, learn new things and having more players in these countries will only help netball all over the world.”

After the success World Cup, netball is growing stronger in both the UK and Zimbabwe. Netball and its players continue to gain more respect in both nations; as do women’s sport in general.

This, according to Kwangwa, is an emerging theme in Zimbabwe where she feels women are now treated with more respect than ever before and given opportunities previously closed off to them.

Equality will always be the aim and, with strong role models like Kwangwa succeeding on the elite level, sport will always be a great tool in making it happen.

“For centuries women have never been in the spotlight but, of course, things are changing which is good. Back home in Africa, the situation is a bit different than this side where more women are more confident about themselves and believe they’re capable of doing anything.

“Most women find it difficult to stand up for themselves, to say ‘I can do it’ and mostly it’s because they’re scared of being judged by the society. Being scared of failure is what setbacks a lot of women and, when we fail, people will always talk a lot. When you succeed, only a few will say something.

“It’s still a process but things are changing. We have a lot of women getting involved in almost everything, in all sectors. It hasn’t reached the point where I wish it would be but it’s something which is ongoing and I’m so happy about it.

“I’ve seen a lot of women back home motivating us since I was in primary school, some now even in politics. It shows things are progressing very well and hopefully very soon we will reach equality level.”

Surrey Storm
Previous Story Nia Jones: “There are no easy games in the Vitality Netball Superleague”
Next Story Dee Bolakoro: “I can still do more and there’s nothing impossible in life”