Josie Huckle of Wasps Netball during the Vitality Super League match between Loughborough Lightning and Wasps at Studio 001, Wakefield, England on 15th January 2021.

As someone who has four Vitality Netball Superleague (VNSL) titles to their name, it might not come as a surprise that Josie Huckle brings the same winning attitude to her coaching.

Huckle works as Head of Netball at Bedford Girls’ School and is also actively involved in Wasps pathway coaching, with her ultimate goal to become an England coach.

“When the regional system disbanded, they introduced hubs into the franchises. I won back-to-back titles with my hub, which I was very proud of the girls for because we work extremely hard.”

Josie ended up coaching the U17s before becoming Assistant Coach for the U19s.

“That was an incredible experience. I loved being part of that and I’d love to do more. The National Performance League has just been given the go-ahead to restart and hopefully next year, when it kicks off more officially, I can get back into it.”

As well as the pathway, Huckle is also involved with Wasps’ many community programmes, leading coaching for coaches, half-term camps and masterclasses.

“Coaching is one of my joys in life – I really like giving people opportunities and I like passing on my knowledge. I’ve got a brain full of information I want to share, I just want to give people the opportunity to play.

“I love coaching performance; I think that’s definitely where I’d like to be. Performance is my dream. But my favourite thing is when you go to a coaching camp and you think a kid is a bit disengaged and doesn’t really want to be there, then their parents email to let you know their child had the best time and won’t shut up about the whole thing.

“It’s just really nice to have that feedback from parents to know that a child who you thought potentially wasn’t interested actually really loved it and enjoyed the session.”

Huckle recognises that the power of coaching extends beyond the court. 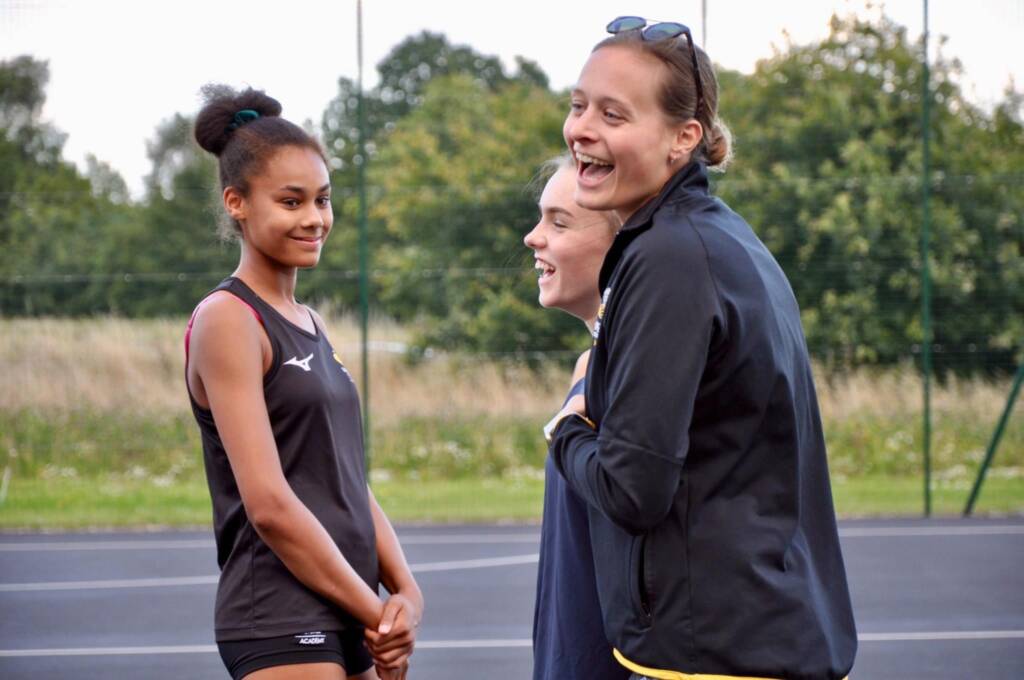 “It’s about helping these girls realise that anything’s possible. Whether it’s netball, music, science, whatever it is, they can do it. It might be that one person one day says something in a certain way that makes your brain go, ‘Oh my god, I can do this, I can actually do this’.

Huckle’s own netball career serves as a great lesson for her players in how to utilise their individual strengths.

“I haven’t had the most straightforward netball journey. Thankfully, I’ve not had any injuries and have a very healthy body. However, I’ve had a very tricky road to getting on court, cementing game time, and playing week in, week out. There have been times where I’ve sat on the bench, started games then been taken off, or been used as an impact player. Even if I’ve not always been certain of my place in the team, the role that I’ve always tried to take on is that of team cheerleader.”

“I know I’m a good enough player to play in the Superleague as I’ve been here for many, many years but I think what I do off the court in terms of my personality, my energy and what I bring to a team is what has kept me as a Superleague player.”

As someone who has spent years balancing work, coaching and a VNSL career, Huckle’s advice to others is to remember that not every day will be perfect.

“There are days when you go to training and you can’t do anything right – your shoes don’t go on the right feet, you forget your water bottle and you can’t catch a ball. Some days it’s just really tricky but it’s about how you deal with that. Do you go home and sulk and cry, do you just not train for the next four weeks, or do you just step up and say tomorrow’s another day, what are my goals, what are my intentions for this week, how can I get back on track?”

“They say the line of success is point to point but it’s actually all over the place. It’s about realising that it’s a journey and no two journey look the same.”

On the subject of International Women’s Day, Huckle says she is proud that the current generation of VNSL players are challenging on and off the court more than ever.

“There’s been a lot happening recently, with COVID especially, and a lot of people have been unsure as to what is going on. I think that netball is the biggest sport in our country, so for us to lead the way, for us to be putting our hands up and going, ‘I’m here, I choose to challenge too, I’m ready to help you’, that has a big snowball effect.

Wasps Netball
Previous Story Nia Jones: “There are no easy games in the Vitality Netball Superleague”
Next Story Felisitus Kwangwa: “For centuries women have never been in the spotlight but things are changing”