Hannah Williams of Loughborough Lightning in action against Severn Stars.

After 20 rounds and five months, the Finals Weekend of the Vitality Netball Superleague (VSNL) 2021 season is finally upon us and Loughborough Lightning hope to win the title for the first time on June 27.

Get the lowdown on Loughborough Lightning ahead of their semi-final encounter with Leeds Rhinos on June 26:

The Lowdown: Loughborough Lightning have only ever achieved a points total greater than their 2021 tally of 51 once in their 16 years competing in the VNSL, when they topped the league with 54 points in 2017.

That year, they reached the first of two successive Grand Finals. Both of which ended in 55-51 defeats to a Tamsin Greenway-led Wasps side who made their Superleague debut in that 2017 season.

Lightning will hope they will fare better than those two defeats – and indeed their 2008 loss to Saracens Mavericks – in their Finals Weekend campaign at the Copper Box Arena this year when they face old foes Manchester Thunder in their semi-final.

Fans of the club should be optimistic, too. Sara Francis-Bayman has put together a talented squad which was boosted by the notable addition of Commonwealth Games winner Beth Cobden, who signed after a spell in Australia’s Super Netball league.

A settled side features the likes of the long-serving Hannah Joseph (joined 2011), fan-favourite Lauren Nicholls (joined 2011) and captain Natalie Panagarry (joined 2015) alongside an injection of promising youngsters such as Alice Harvey, Suzie Liverseidge and Hannah Williams.

The combination of youth and experience has worked wonders for Lightning this term. They finished in first spot – joint on 51 points with Thunder and Team Bath – after losing just three of their 20 games.

Francis-Bayman will be confident of her side’s ability to put in a performance against a top four contender after her side’s performance against Team Bath Netball on the final day. Previously, their only defeats had come at the hands of Bath and Thunder who did the double over the Leicestershire outfit this season. 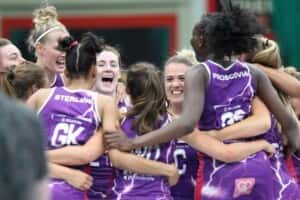 However, this squad has had experience of getting past strong opponents in the past and navigated tight fixtures with Bath, Wasps, Strathclyde Sirens and Leeds Rhinos in 2021.

Four of this squad started the Grand Final three years ago and they will have to get past newcomers Rhinos to avenge this defeat. Could this be their year?

Key Players: Francis-Bayman has a strong squad and can call upon players to make a difference from the bench. Three in particular, though, make a regular difference in Lightning’s Starting VII.

Sam May – normally partnered by Alice Harvey in defence – has been a rock at the back for her teammates. The Australian is enjoying her final season in netball after announcing her retirement and leads their squad in turnovers (57), interceptions (30) and deflections (42).

Natalie Panagarry is enjoying a season largely unaffected by injuries and her contribution in the mid-court has been apparent. Using her tactical understanding and work rate, she is a constant defensive threat and can offer an attacking option with her speed, vision and clean hands.

One benefitting from these mid-court feeds is Mary Cholhok. While her partner at goal attack has often rotated between Clark and Liverseidge, Cholhok has been a constant source of goals in that shooting circle.

The Ugandan finished top of the Gilbert Top Scorer leaderboard this season with 772 goals to her name and an 88 per cent shot accuracy; her highest-scoring campaign to date.

Where to Watch: You can watch Loughborough Lightning’s semi-final with Leeds Rhinos live on Sky Sports Arena and Mix. You can also watch for free on YouTube here.