After 20 rounds and five months, the Finals Weekend of the Vitality Netball Superleague (VSNL) 2021 season is finally upon us and Leeds Rhinos have made the semi-finals in their debut campaign.

They will join Team Bath, Manchester Thunder and Loughborough Lightning when the four top-class sides descend on the Copper Box Arena this weekend.

Get the lowdown on Leeds Rhinos ahead of their semi-final encounter with Lightning on June 26:

The Lowdown: It has been quite the introduction to Vitality Netball Superleague life for newcomers Leeds Rhinos Netball. In just a few months they have played their first-ever game, dealt with a plague of injuries to first-team players, fought in the most dramatic top four race of all time, and had their last two games cancelled due to COVID-19.

The Yorkshire outfit have taken everything the 2021 season has had to throw at them and – ever since Rhea Dixon scored their first-ever goal against Celtic Dragons in February – they have done so with some style, attracting many news fans along the way.

Dan Ryan’s team were always going to be contenders for the semi-finals after an eye-catching signing window in 2020 which saw them secure deals for England’s most-capped player in Jade Clarke, the ever-reliable defender Vicki Oyesola and fan-favourite Donnell Wallam among others.

These players have been aided by the rest of a strong squad. When the likes of Fi Toner, Tuaine Keenan and Wallam were injured against Saracens Mavericks in Round 2, the fringe players stepped up impeccably to maintain Rhinos’ momentum early in the season.

They have also remained within touching distance of their fellow semi-finalists when they went head-to-head. Despite never failing to to beat any of the sides above them so far they came within seven goals of Thunder, six goals of Team Bath and eight goals of Lightning

Beating the latter in the semi-final would be a tough task for any side let alone a Rhinos team which was unable to play their final two fixtures as a result of a positive COVID-19 test. The squad will also be without star signing Wallam who has returned to Australia due to a recent family bereavement.

Ryan will once again rely on his players’ ability to come back from adversity and produce a performance that could see them reach the Grand Final at the first attempt. 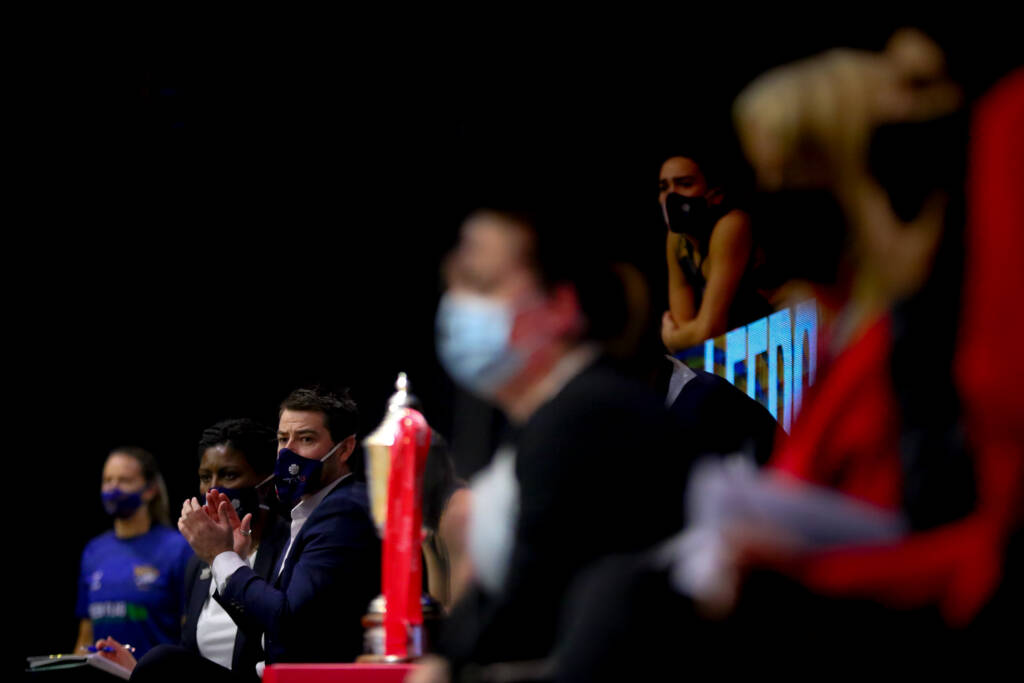 Will Dan Ryan and Rhinos lift the VNSL trophy in June?

Key Players: As mentioned, Ryan has had to change his side throughout the season for different reasons meaning that almost all players have seen serious court time.

Vicki Oyesola has played with different goal keepers – both Paige Kindred and Tuaine Keenan have shared the bib – all season and she herself has her court time managed during games.

The ex-Lightning and England defender has been phenomenal when she is out on court and is a fearsome opponent for any shooter. Only three players have produced more deflections (59) than Oyesola this season.

Her fellow countrywoman Jade Clarke, meanwhile, is showing exactly why Rhinos made her their first signing. The experienced mid-courter leads off court and by example on it.

With Rhinos possibly without Wallam, it could be time for Sienna Rushton to step up once again. The teenager replaced her teammate admirably earlier in the season and has scored a personal best of 225 goals as a result.

Where to Watch: You can watch Leeds Rhinos Netball’s semi-final with Loughborough Lightning live on Sky Sports Arena and Mix. You can also watch for free on YouTube here.