Manchester Thunder and Saracens Mavericks emerged from the opening weekend of the Vitality Superleague with 100% records, while London Pulse claimed the notable scalp of Team Bath on a memorable Sunday of action.

After a bumper day one in Birmingham, Thunder brought the curtain down on a a bumper weekend of action, following up Saturday’s win over Celtic Dragons with a 70-45 win over Severn Stars in the final match of the weekend.

However Mavericks ensured they were not alone at the top of the table after edging out Celtic Dragons following the game of the weekend which had seen London Pulse’s talented young squad see off Team Bath in a nailbiting affair.

Strathclyde Sirens picked up a first win of the season, bouncing back from losing to Team Bath to eventually see off Wasps with a clinical third quarter proving decisive in an enthralling contest. 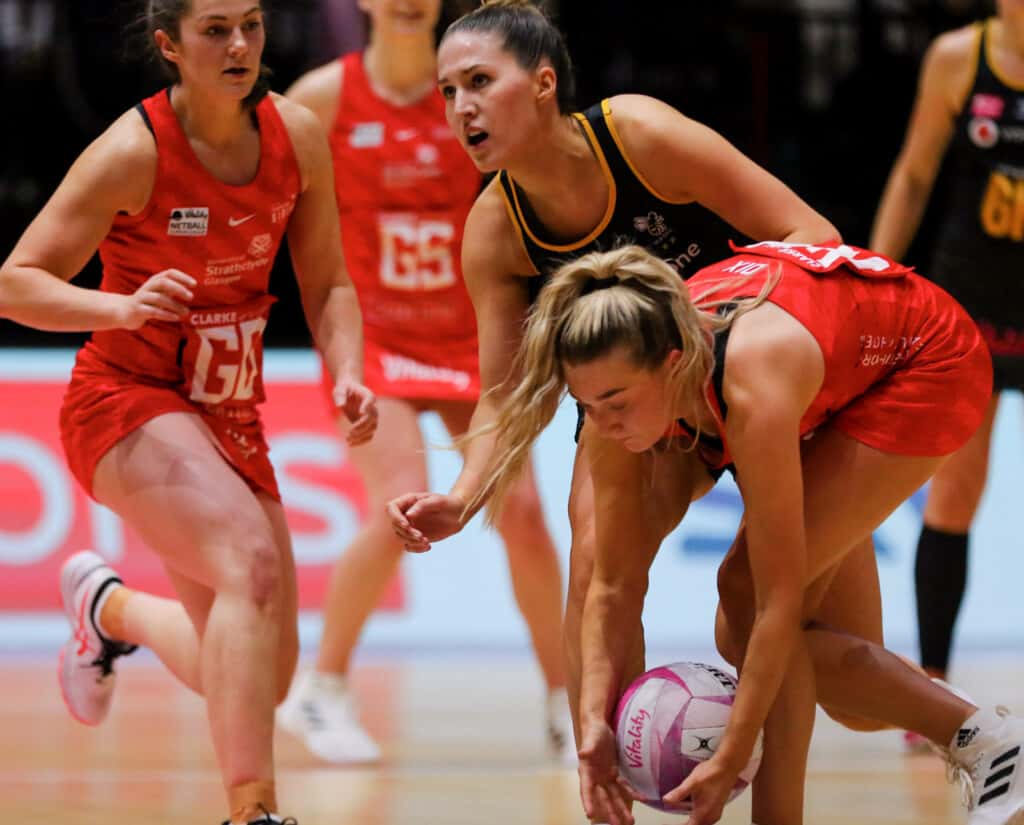 Fresh from a defeat against Saracens Mavericks on Saturday, Wasps made most of the early running with Rachel Dunn and Lucy Parize linking well in the shooting circle as they gained the upper hand.

Leading by a solitary goal, Wasps steadily build their advantage through the second quarter to lead by four going into half-time but Sirens made a habit of fighting back last season and they did so again.

A brilliant third quarter saw them outscore Wasps 14-6 thanks to superb turnover work from Emily Nicholl and Taylor McKevitt which allowed Bethan Goodwin and Niamh McCall to turn a deficit into a four-goal advantage.

Wasps threatened a mid-quarter rally down the stretch but Sirens stood firm to ensure they return to Scotland for their first home game next weekend with a victory from the opening weekend.

“The game is never over until the final whistle blows, so as long as we stay on in defence and are clinical in attack we know we can take it to anyone. We have such a solid defensive unit that we’ll know they turnover ball, so we just keep going and when other teams might dip we want to be in a position to take advantage,” Bethan Goodwin.

Wasps return to their home court in Round 3 when they take on Severn Stars at the CBS Arena on Saturday (7pm), while Sirens will also have home advantage when they host Leeds Rhinos on Friday night (7.30pm).

London Pulse gained revenge for a pair of defeats by Team Bath last season with a stunning victory that was only sealed in the final moments of a gripping contest. 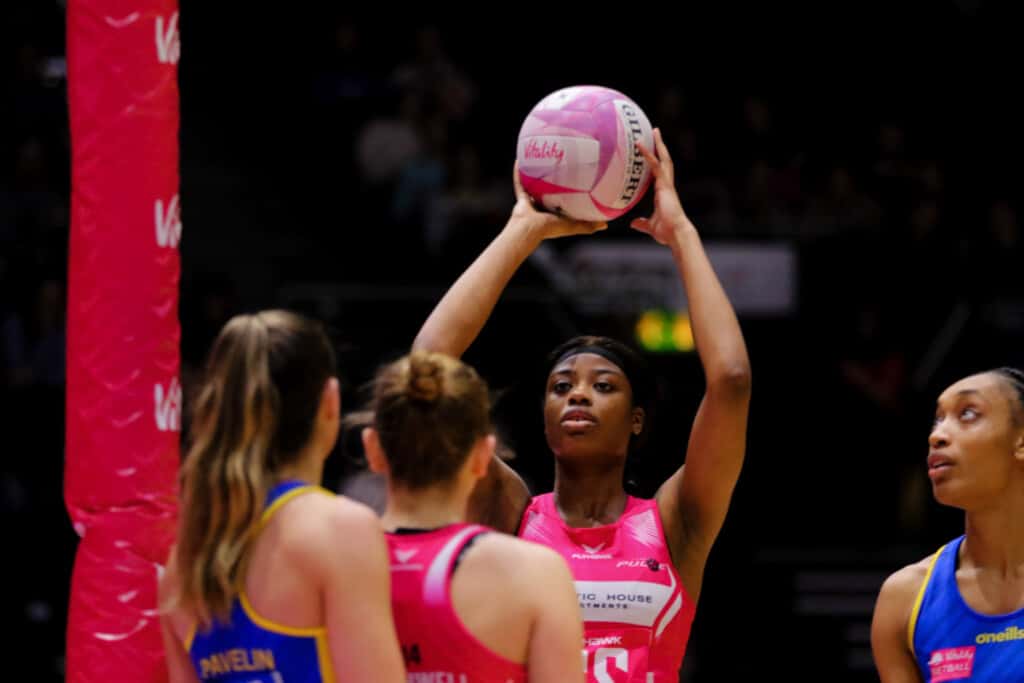 From the early moments, when Pulse shocked everyone with a blistering start that had then 10 in front early they made the running, the game had everything.

Pulse had been beaten in the season curtain-raiser by Loughborough on Saturday afternoon, but inspired by their defensive end and the nerveless shooting of Olivia Tchine, Sam Bird’s team held off every threat of a Bath comeback.

England Roses star Layla Guscoth  doing her best to haul Bath bath into it trailing by seven midway through the second quarter.

At end of the first quarter, in a dominant third quarter and in a see-saw final 15 minutes, Bath looked like they might finally haul in their opponents – the defensive skills of Layla Guscoth and then the re-introduction of Kim Borger looked like it might prove decisive.

However, as they had done throughout, Funmi Fudoji, Zara Everitt, Jas Odeogberin and Jayda Pechova turned over crucial ball and Tchine ensured they closed out a memorable victory.

“We knew we had two tough games and we wanted to come here and get two wins, we were disappointed yesterday so we were knew we weren’t going to go home today without a win.

“Our ethos as a club is that we want to be the names of tomorrow, we want to be the ones that are coming through and representing England in the years to come but we know we have the ability to take down the big names,” Zara Everitt.

London Pulse are on the road in Round 3 when they travel to the Hertfordshire Sports Village on Friday night in a game you can see on Sky Sports YouTube channel (7pm). Team Bath are also in front of the cameras in the first Monday Night Netball of the season when they travel to Leeds Rhinos (5.30pm).

Saracens Mavericks are vowing to put their inconsistency behind them and they made it two wins from two games with a hard-fought win over Celtic Dragons. 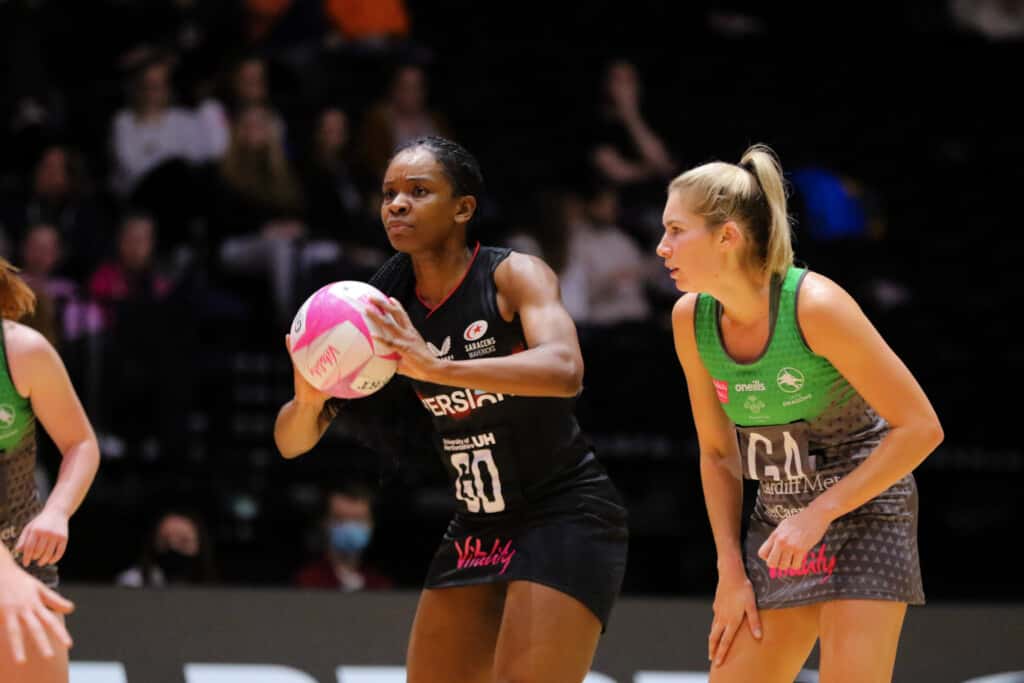 Mavs missed out on a place in the top four last season but they followed up their win over Wasps by fighting back from a half-time deficit to pull clear with an impressive second half.

Dragons had been competitive with Manchester Thunder for long stretches in Round 1 and they took those positives into Sunday’s contest as the defensive pairing of Shaquanda Greene-Noel and Annabel Roddy helped forge a three-goal half-time lead.

Galvanised by the break, Mavericks outscored their Welsh opposition 18-11 in the third quarter and 15-12 in the final period to deny new Dragons head coach Danni Titmuss-Morris a first win.

Shooter Ine-Mare Venter was the catalyst for Mavericks, her 95% shooting display and partnership with first Kadeen Corbin and then Chloe Essam capped a player of the match display that Mavs hauled Mavs clear in the closing stages.

High-scoring Manchester Thunder carried on where they left off on Saturday, racking up 70 goals in a dominant victory over Severn Stars that saw Karen Greig’s team set the early Superleague pace. 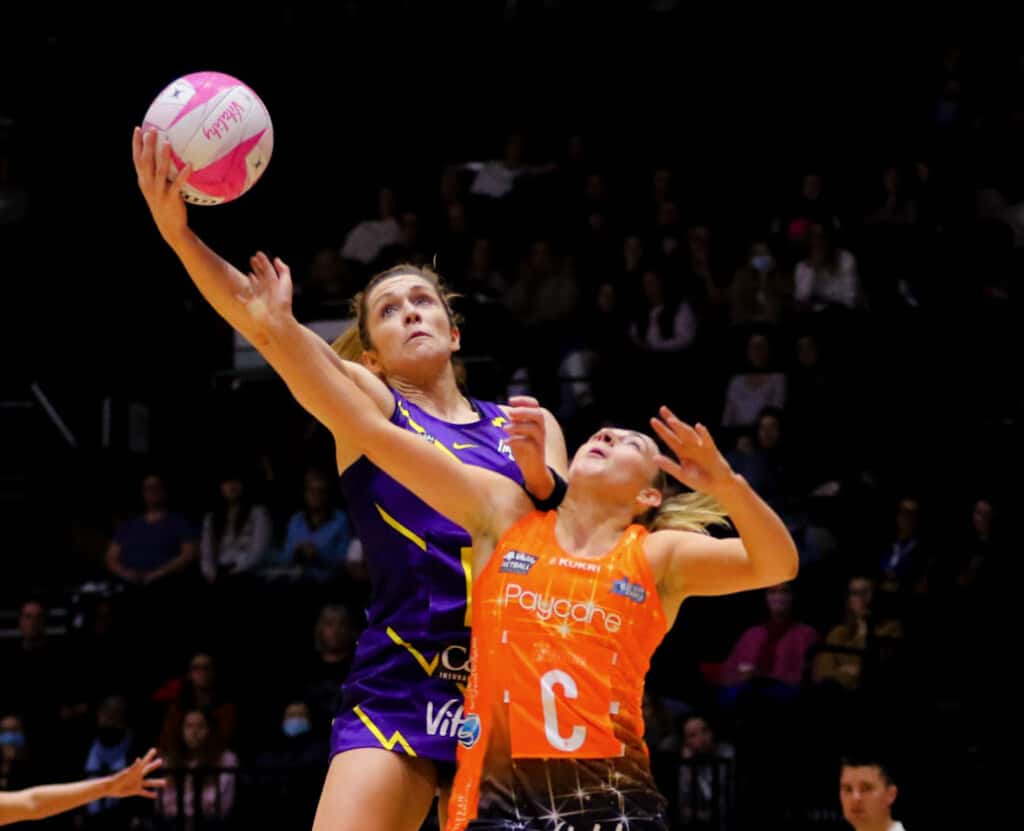 2019 champions Thunder wasted little time in getting going, a fast start saw them open up a nine-goal advantage by the end of the first quarter and extend that to 19 by half-time with Emma Rayner and Yasmin Roebuck introduced.

Stars got off to a fantastic start with a win over Storm on Saturday, but they were unable to keep pace with Thunder’s high-octane attack as Greig’s team kept their foot on the gas through the second half – Millie Sanders taking her chance to impress in the defensive circle.

A more competitive second half will give Stars plenty to build on as well as their Round 1 victory but for Thunder it’s an early statement of their intent to add a fourth Superleague;eague crowd to their cabinet.

“A fantastic start to the season and I really proud of the girls. It’s hard when the international players have been away – we’ve only been together for a short about of time but the girls have been working so hard and it has all come together nicely for the start of the season,” Laura Malcolm.

Both teams are in action on Saturday evening in Round 3, Stars travel to Wasps (7pm) while Thunder return to Belle Vue to host Surrey Storm on Saturday (5pm), live on Sky sports YouTube channel.

Catch highlights via the brand new VNSL Superleague YouTube channel and the Vitality Netball Superleague continues with Round 3 that will see franchises returning to their home arenas – tickets are available here.