Wales international Nia Jones firmly believes it’s still possible for girls to follow in her dual-sport footsteps – as the Celtic Dragons prepare for their first home game since 2020.

Dragons are back in Cardiff on Saturday to host Leeds Rhinos (4pm centre pass) and tickets for returning fans – or new fans – are still available here.

Wrexham-born Jones returned to Dragons in the off-season, cementing her status as a Welsh sporting inspiration.

The 29-year-old co-captains the senior international side, is the sole skipper for  Dragons and also boasts 36 football caps for Wales’ senior side and seven years ago was part of the Reading promoted to the Women’s Super League.

The increase in career paths within the increasingly professional world of women’s sport, said Jones, shouldn’t dissuade girls who happen to be doubly talented.

“I think it’s great now that there’s more than just one avenue for girls.

“It used to be that you just played netball at school, and I think it’s a huge strength now that girls have actually got a selection of sports that they can’t just play and enjoy, but they can actually carve out careers in.

“It’s really exciting to be a young, female athlete [now] I think.”

It’s been a tough start for a new-look Dragons and new head coach Danni Titmuss-Morris who have lost their first three games – but there have been positives particularly at Season Opener weekend.

You heard it here first, Dannii can't wait to have fans back and neither can we!

Make sure you wear green, bring money and most importantly, make a lot of noise!

Get your tickets before they sell out!

Having put up 53 goals against Manchester Thunder, Dragons ran Mavericks close on Sunday and both teams are setting the early pace with perfect records this season.

Dragons will take on Rhinos in front of the Green Army and Jones urged supporters, or just the netball-curious, to get along as they chase a first win of the season.

“I think we’re unique because we can literally tap into three million people, which is quite cool, so I think if they could all come along to [the] Sport Wales [National Centre] that would be awesome,” she said.

Joking aside, Jones believes attendance will be vital if Dragons want to improve on their last-placed finish in 2021.

Off-season signings include Trinidad and Tobago’s Shaquanda Greene-Noel who has made her mark early on alongside Scotland international Hannah Leighton, coaxed from Coventry-based side Wasps, to breathe fire into the transformed Dragons defence. 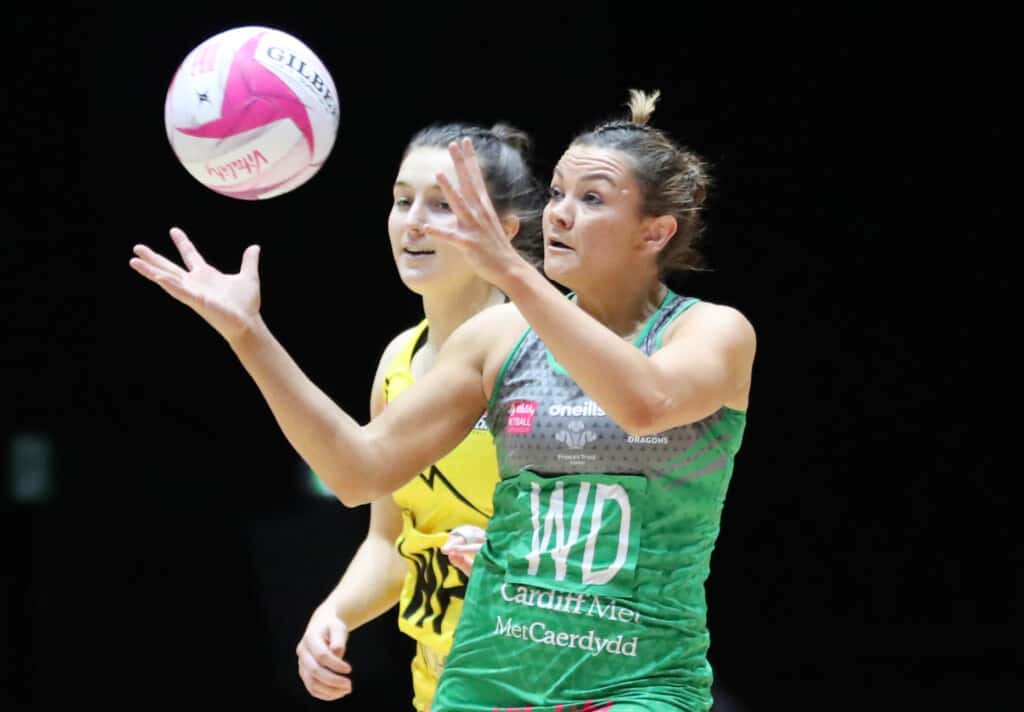 Nia Jones and Dragons are chasing a first win of the season (Image: Morgan Harlow)

Jones has witnessed the exponential growth in popularity of the VNSL and t’s why she’s so thankful to have both boots and trainers in her closet.

“I feel like it’s my strength. I always felt like netball complemented my football and vice versa,” added Jones.

“I think my coaches would argue it’s a detriment at times, especially my contact count.

“But I think that’s what’s improving about netball as well. It’s physical and contested now, everybody is fast and making themselves known on the court, really trying to win those individual battles.

“The transferable skills and fitness aspects of other sports we’re seeing in netball more and more. The agility, the repeated speed, the power needed. You can really cross-code.”

In other words: girls, keep dreaming in double.

Celtic Dragons VNSL 2022
Previous Story Vitality Netball Superleague 2022: What we learned from Round 3 weekend
Next Story Netball is Home: Youthful London Pulse out to inspire on Copper Box return