Proscovia Peace is back in the Vitality Netball Superleague but her netball career nearly ended on the day it began—with a poisoned sweet.

But even before the 19-year-old found herself in a strange city, reeling from the stabbing pain in her stomach as she passed blood for three excruciating days, she simply needed to get to Kampala.

And the risk she took in just buying that bus ticket required more courage than most of us could ever fathom.

Peace’s father warned her she’d become a prostitute and bring disgrace to the family by rendering herself unsuitable for marriage, begging her to stay in their small Arua District village.

She didn’t, telling him: “I don’t want to disobey you, but for the sake of my destiny and my career I will stand against your will.”

She’s back in the UK and the VNSL this season, this time with Surrey Storm—an opportunity for which she is emphatically thankful.

“England Netball and the VNSL gives opportunity to players that wouldn’t make it [in Africa] to come over, explore something and develop themselves and develop their families with community back home,” explained Peace.

“That is something that cannot be traded for anything. On behalf of the African players, I would say that we don’t take it for granted, because we know that this wouldn’t have been possible if the opportunities were not opened.

“You can’t see so many African players in other sports, a few probably there are one or two, but that’s something that makes netball unique. The ability to develop individuals and become a tool for sustainable development.

Peace was the first African player in the VNSL, which now boasts 11 from the continent.

In an extremely international league, she is as world class as it gets. In 2017, the shooter was the league-leading goal-scorer – an achievement emulated by her compatriot Mary Cholhok with Loughborough Lightning last season – leading to Player of the Season and Player’s Player awards.

Yet it’s pieces of paper, not hardware, she treasures most.

Growing up, Peace’s family and fellow villagers had to walk an hour to pump water from the well. School cost just £1.50 but it was unaffordable for her parents. She went anyway, and someone stepped in to cover her fees.

Most of Peace’s primary school friends were eventually forced into early marriage, earning money by selling items on the roadside. It’s a fate she was determined to avoid.

In 2005, Peace was talent-spotted by a secondary school teacher who encouraged her to try netball, eventually leading to places on the school and district squads.

University was utterly unaffordable, so Peace returned to her family after graduation to help with cultivating and selling crops.

Everything changed in 2008, when a call came from the National Insurance Corporation Holdings Netball Cub. Would she, they asked her, come to Kampala to play?

Peace boarded the bus with mum in tow, but soon found herself writhing in agony from the tainted sweet, given to her by a stranger. 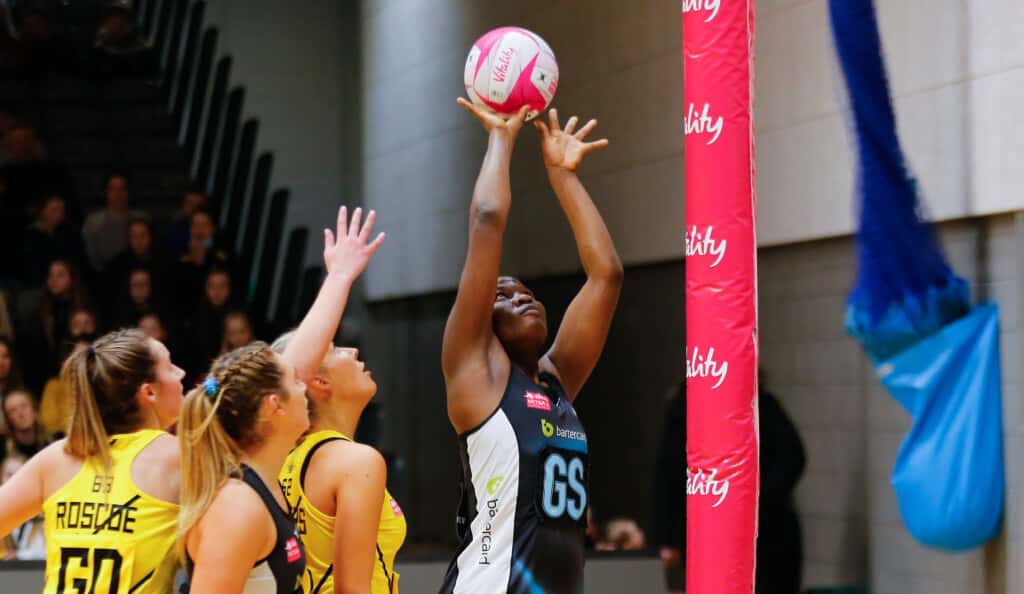 Proscovia Peace against Manchester Thunder (Image: Touchline Pics)
Unable to afford a hospital, she took some herbal medicine. Her father, meanwhile, suggested the gruesome incident might be a warning from above, but she was resolute in her conviction to stay in the capital.

Peace’s new team supported her first diploma. Then, while playing as a member of Uganda national side – the She-Cranes – Peace was offered a full scholarship to Uganda Christian University.

A move to England

In 2014, Loughborough Lightning’s scouts were sent to the World Cup qualifiers with one mission in mind: recruit the squad’s next shooting star. When they laid eyes on the prolific 6’3 (1.93m) Ugandan, they knew they’d found their woman.

The opportunity with the university-based VNSL squad allowed Peace to send even more money home to her family, and do what once seemed impossible—earn a Masters degree in marketing.

And though Peace wasn’t part of last season’s championship Lightning side, who finally clinched their maiden VNSL title after three Grand Finals ended in heartbreak, she was still beaming for her former team-mates from afar.

“We were pushing for it for years,” she said. “Seeing them lift the trophy last year actually brought it into fulfilment for me, so getting that nailed down was really an excitement.”

Peace cackles when asked if she plans to challenge Cholhok for top shooter honours in 2022. 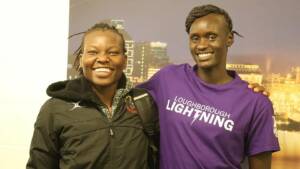 “She’s like my younger sister,” she explains, “And I enjoy seeing her play and go from strength to strength. But all I can say is we will both play our best, and at the end it’s all for our development, and for the development of Uganda.

“This is talent being developed for all of Uganda, so either way may the best woman win.”

Things have transformed back at home, where Peace has become a bit of a local celebrity.

Her stunning success has inspired other parents to let their girls leave Arua to pursue netball careers—boosted by persuasion from Peace’s father, who has become one of the village’s strongest champions for women in sport.

“The opportunity netball has given me to speak on behalf of the people that cannot speak for themselves is something I am grateful for.

“Leaving a legacy is not all the trophies, all the medals that I get.

“It’s having an impact in the life of somebody and being that light at the end of the tunnel.”

It’s those girls, more and more of them now, boarding buses brimming with possibility.