Tickets are available for the clash at Belle Vue here.

Just over three years ago Thunder and Wasps met in the 2019 Grand Final where Karen Greig’s team prevailed, on Monday night they meet at different ends of this season’s Vitality Netball Superleague spectrum.

Thunder are won of two teams to have won all their games this season and it has given them an early three-point lead at the top of the table, following a victory over Saracens Mavericks that ended their host perfect start to the season on Saturday.

Wasps have won just once so far this season, and after the 2021 campaign saw them finish outside the top four for the first time in their history it’s not been the start they wanted.

Despite the early season disparity, the pair have built up a healthy rivalry since Wasps joined the league in 2017 – Monday night promising to be an intriguing next instalment.

After winning three of the first four meetings, Wasps have won just one of the last 7 – but contests between the two are always keenly contested.

It was one win apiece last season, with Wasps’ 53-44 win in March last season their first over their northern rivals since the 2018 campaign.

The pair have met twice in the post season, first in Wasps’ debut season as the franchise claimed semi-final victory on their way to the title that year and then memorably in 2019 when Thunder won a thrilling Grand Final.

The Story So Far…

Going toe to toe at the top! 👊

Thunder have enjoyed a stellar opening to the season, running riot in their opening four matches and scoring at least 70 goals on each occasion – including their only home game this season a 76-68 win over Surrey Storm.

After wins over teams to have finished outside of the top four last season, their toughest test came at the Hertfordshire Sports Village on Saturday when they had to dig deep for a big victory over Saracens Mavericks to extend their perfect start.

Wasps kicked off at Season Opener with a pair of defeats to Mavericks and Strathclyde Sirens before returning to the CBS Arena with victory over Severn Stars.

Last time out Wasps suffered a third defeat of the campaign in losing to Pulse and will be desperate to bounce back if they are to ignite their hopes of a return to the top four.

Given Thunder’s relentless scoring, the match up between their all-star shooting circle and the Wasps defence will decide the game. 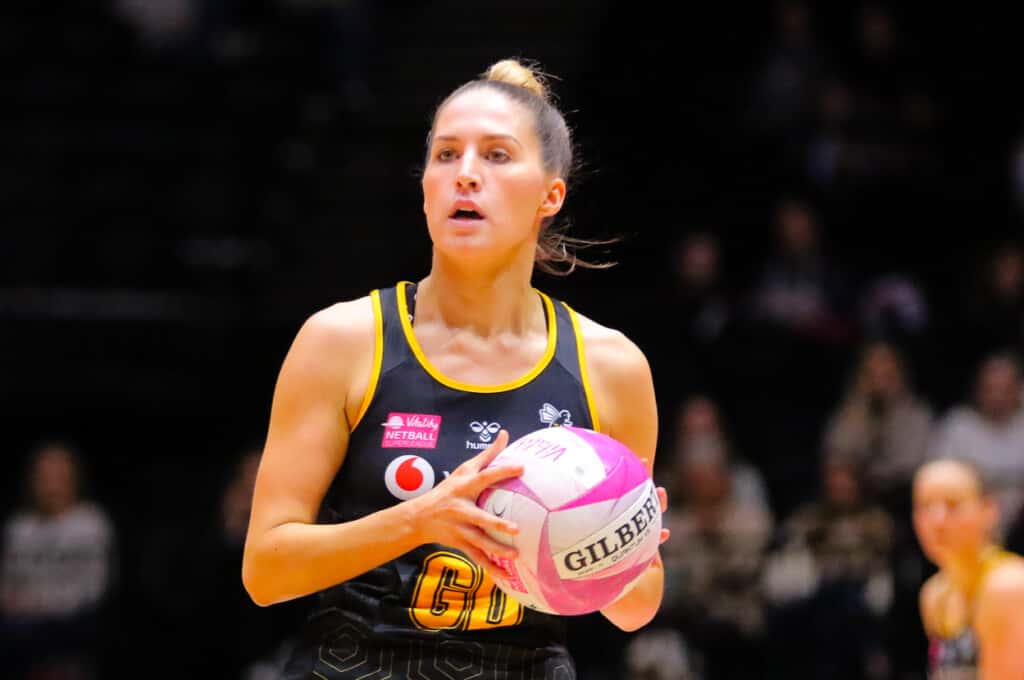 Joyce Mvula and Eleanor Cardwell have been formidable under the posts – Cardwell has wracked up 142 goals to go with 68 feeds while Mvula sits third in the goalscoring charts with 202 goals at 90% so far this season.

The volume of Cardwell in the GA position has proved a nightmare for opposition defences and Wasps will need Josie Huckle to call on her vast experience against the duo, while goal defence Ella Powell-Davies will face another test of her emerging talent.

Mavericks pairing of Razia Quashie and Jodie Gibson forced Thunder into using Nat Metcalf and Lois Pearson such was the defensive impact in shutting down Mvula and Cardwell.

If Wasps can do similar they’ll give themselves a platform for trying to come away with the win.

Mavericks, Wasps and then Team Bath on Friday night is a draining schedule but they are up for the challenge.

“We’ve got three games in six days so it’s a tough week for us. We have to recover well, watch plenty of video.

“We need to make sure we are ready and don’t rest on our laurels – Wasps offer something completely different to Mavericks so we’ll has to reassess how we go after that game,” Karen Greig, Manchester Thunder head coach