One of the longest rivalries in the British domestic netball dates back to before the Superleague, when the franchises were meeting in the Super Cup with huge names on both squads.

Fast forward to 2022 and it’s more of the same as teams full of England and international superstars prepare to battle it out in a contest that has ramifications at the top of the table.

Loughborough Lightning are second in the table with a 100% record and know a win by a significant margin could take them within touching distance of Manchester Thunder at the top of the table, while Team Bath could move back into the top four.

Bath have overcome a tough start of injuries and illness, but returned to winning ways on Sunday with success over Celtic Dragons, one week on from defeat to Thunder – the other team in the VNSL with a perfect record.

Tickets for the game are still available here

Coverage is available on Sky Sports Main Event, Mix and Arena with Jess Thirlby and Tamsin Greenway in the studio alongside Di Dougherty.

Commentary comes from Pamela Cookey and Lindsay Chapman and highlights are available via the VNSL YouTube channel here.

Loughborough have won the last two meetings – including victory in last season’s Grand Final at the Copper Box where Lightning claimed their first Superleague title with a brilliant performance.

However it’s Team Bath that have had the upper hand more recently, Lightning’s victories in the last two games halted a run of five successive wins for Bath.

Games between the two teams invariably involve plenty of drama – and Lightning’s last victory in Bath is the perfect example, running out 43-42 winners at Team Bath Arena in June 2018. 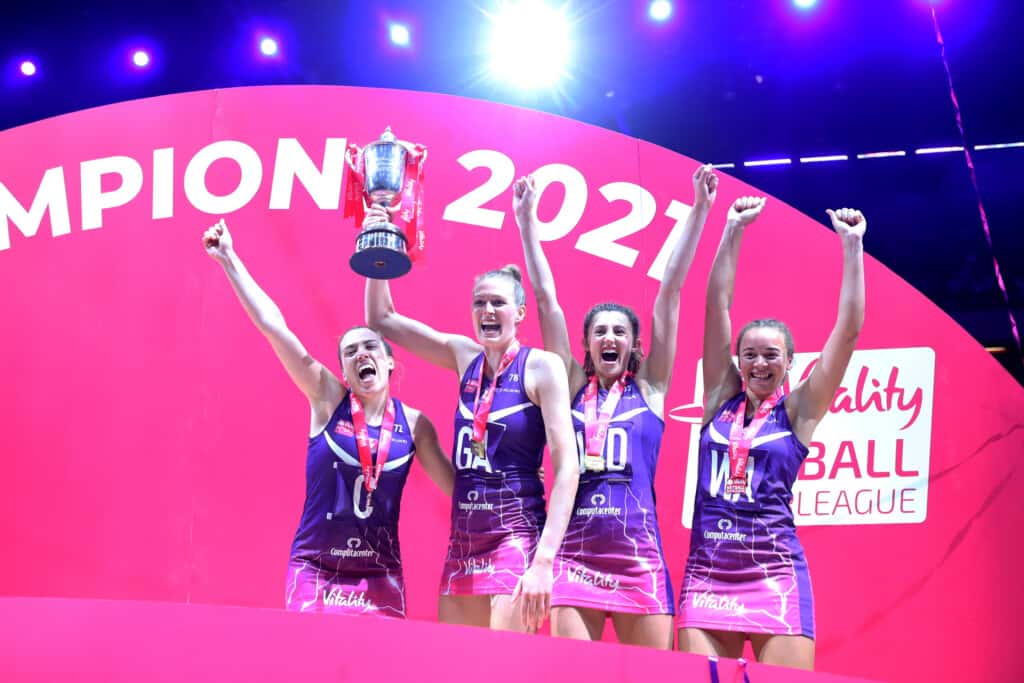 Bath are usually a model of consistency, so a run of form that reads WLWLWLW tells the story.

Injuries and a covid-19 outbreak early in the season can explain that, but defeat to top four rivals London Pulse and Surrey Storm show that there are a few things to iron out. 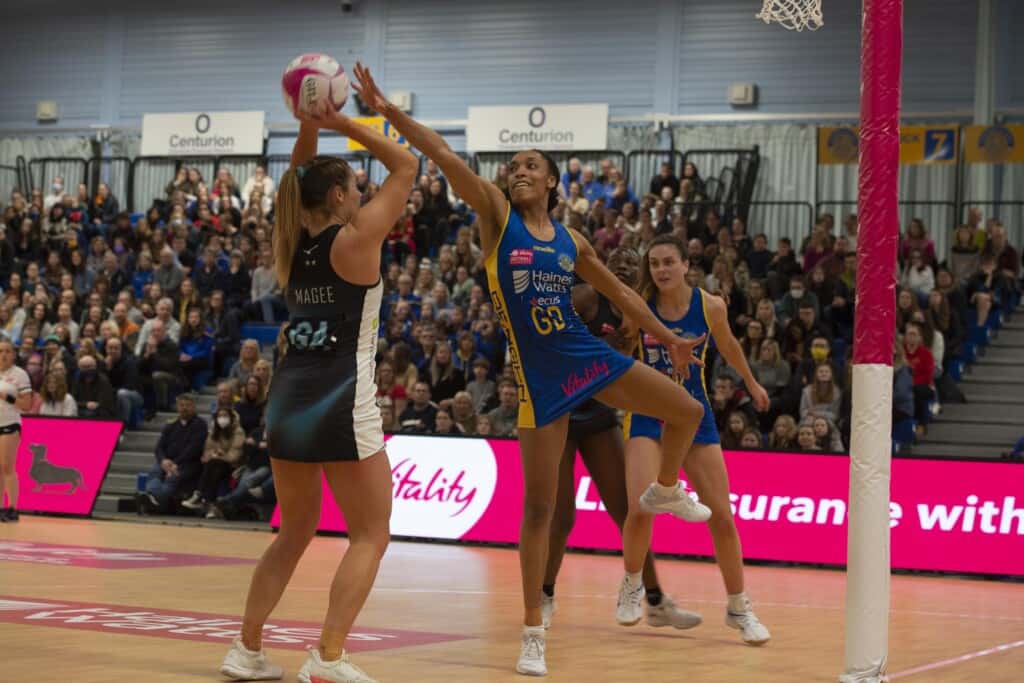 Layla Guscoth’s defensive skills will be on display against a dominant Lightning attack (Copyright – www.claregreenphotography.com)

The last few games have seen Kirsty Harris cement her place at wing attack alongside Kim Borger and Sophie Drakeford-Lewis, while Phumza Maweni is now fit and starting meaning options are  plentiful in defence.

For Loughborough, it’s been about as perfect a start to the defence of their title as they could wish.

Six victories and the same starting seven picked for the first five games have meant a seamless transition from Sara Francis-Bayman to Victoria Burgess.

Fran Williams has settled into a defensive end alongside Alice Harvey and Beth Cobden.

The only change to the seven came when Susie Liverseidge started at goal attack in place of Ella Clark for Sunday’s win over over Wasps – the expectation is that Clark is likely to return as Lightning chase a win that would take them within three points of Thunder with a game in hand.

Everywhere you look there are intriguing match-ups as the Loughborough attacking circle of Hannah Joseph, Ella Clark and Mary Cholhok go up against Phumza Maweni and Layla Guscoth.

Equally the dynamic pairing of Sophie Drakeford-Lewis and Kim Borger will get one of the VNSL’s toughest tests as Roses pair Williams and Cobden team up at wing defence and goal defence.

Who fills the Bath wing defence bib may be crucial – captain Imogen Allison and Tash Pavelin are the options, Allison could switch to centre and it’s there we are going to focus. 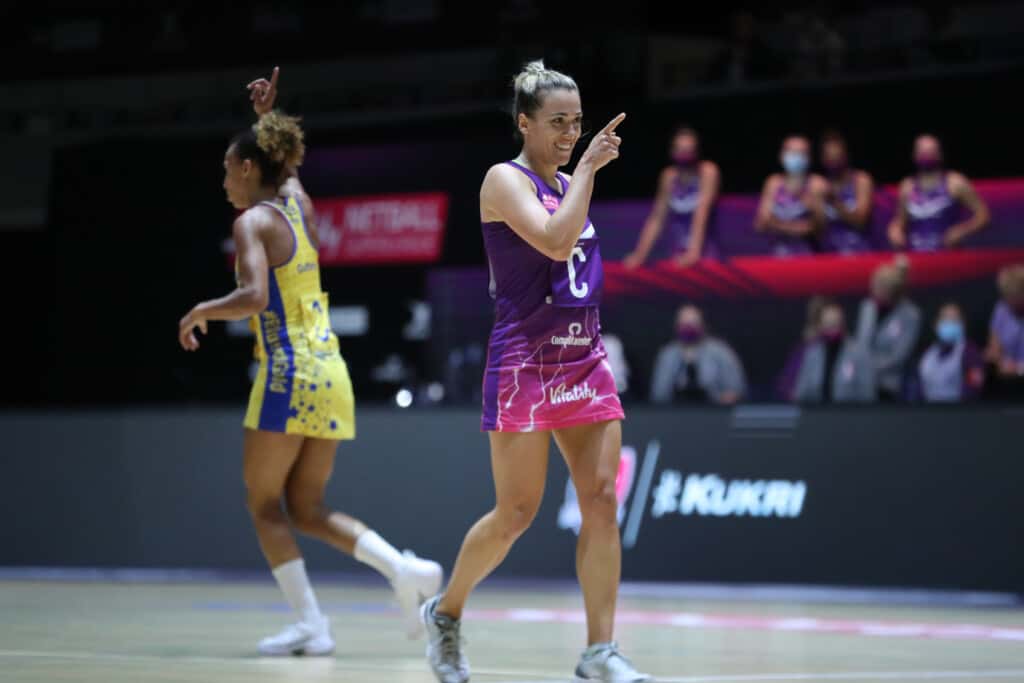 Nat Panagarry will be out to impress for club and country

Nat Panagarry has been an ever present in a consistent Loughborough line-up that has only seen one change (in goal attack for the weekend’s win over Wasps).

Jess Shaw has started started all bar one game in the Bath centre bib but with Maweni settling in at goalkeeper, Anna Stembridge has defensive options to consider and Allison is an option having started there against Thunder.

Fresh from the news last week that Serena Guthrie is retiring following the news that she is pregnant with her first child, the centre court contest feels like an added area to watch.

Plus Jess Thirlby will be watching on, and has a rather large hole to fill in her squad for the Commonwealth Games in June.

Mary Cholhok trails only Proscovia Peace in the scoring standings, and despite being just one game behind, the difference she needs to overhaul is considerable which Peace on 383 goals.

It surprises no-one that Layla Guscoth is dominating in defence. With 40 turnovers the Roses star trails only Towera Vinkhumbo and Funmi Fadoju while her 29 deflections is third in the league.

Tash Pavelin has also been a star, with 20 interceptions she is second in the league in that category – she may only have got her chance with Serena Guthrie’s early absence but she’s been hugely influential and how Anna Stembridge juggles those defensive options is crucial. 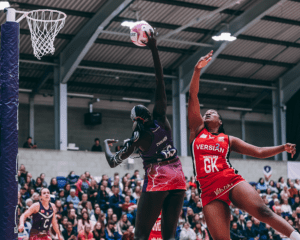 Tickets for London Pulse vs Strathclyde Sirens are available here

First centre pass is at 7pm as Pulse look to maintain their brilliant home form which stands at four wins from four games and as propelled them into third place in the league.

Sirens are seeking a win that would get their own top four push back on track in a congested race for the semi-finals places.

Highlights from the game can be seen on the VNSL YouTube channel.