Team Bath have fought more fires than most in the Vitality Netball Superleague this season.

Head coach Anna Stembridge has been manning the pumps and tasked with guiding the 2021 Grand Finalists through the choppy waters of injury, illness and inexperience.

The latest challenge came in the shape of fresh positive Covid cases in the squad that led to the postponement of their Round 10 clash with Saracens Mavericks.

A group with 11 returning players and a string of young talent have certainly been challenged and emerged with flying colours, according to Stembridge.

On the latest episode of Off the Court with Caroline Barker and Tamsin Greenway, the South-West supremo shared the inside track on the team’s season so far.

“It would be remiss of me to say it’s been easy,” she said. “We’ve had to look week-by-week and see who we’ve got training on any given day.

“There are things coming through and you think ‘goodness me, what else is going to be thrown at us?’

“You’ve just got to embrace it and we are throwing everything we can at each game. Credit to the girls, because they’re just embracing it and having a crack.”

Injury and illness have deprived Stembridge of the experience of Rachel Shaw, featuring in her ninth season, and the youthful exuberance of Hannah Passmore and Betsy Creak. 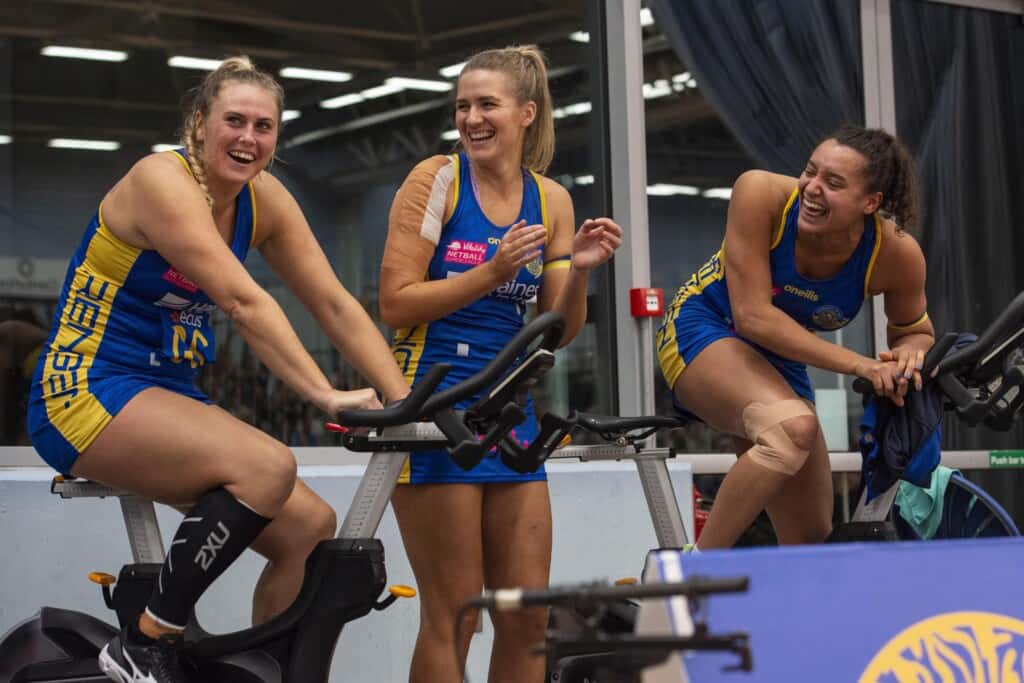 They also bade farewell to Serena Guthrie, who won four Superleague titles with the club, in it’s own way marking the end of an era.

There has still been plenty of court time for young talent, by accident and design, but no compromise on standards from Stembridge.

“The biggest thing for me is we have seen people step up,” she said. “Kirsty Harris has been exceptional at times and has grown with every opportunity she gets.

“She’s learning quickly and there was some naivety if you looked at what she was doing in Round 1, but she has learnt quickly.

“People like Betsy and Kirsty are relishing the opportunity. You’ve got to give them that but only when performance warrants it and you’ve seen that in training.

“We don’t give people court time for the sake of giving them court time, we’re still there to win it and to compete.

“The goal is still top four and we’ve shown that when we have everyone available, we can compete with Thunder and Lightning. We’re still gunning for that.”

The core of the team is a four-strong leadership group made up of a trio of Vitality Roses in Imogen Allison, Sophie Drakeford-Lewis and Layla Guscoth, as well as Kim Borger.

Allison, 23, has shown maturity beyond her years in the captaincy role which was sprung upon her by Stembridge while the player was on Quad Series duty with the Roses.

How did Imogen Allison keep that one in?😲 pic.twitter.com/OibEVGWToB

“Imogen has been exceptional,” said her coach. “We’ve thrown the centre bib at her and she’s embraced it.

“She’s been managing injury as well and that’s challenging when you’re trying to lead.

“It’s easier to lead when you’re performing and winning but when you’re having individual challenges yourself and the team that isn’t quite getting over the line, you have a choice.

“You have to step up and demonstrate to the group that this is what I’m going to do, come with me, shoulder to shoulder. That’s what you’re seeing from her on and off the court.”

There are only 12 places on Jess Thirlby’s squad for the Commonwealth Games in Birmingham, meaning world-class players will miss out on England’s title defence.

Thirlby’s biggest conundrums come in mid-court with Allison among those vying for the centre bib alongside the likes of Jade Clarke and Laura Malcolm. 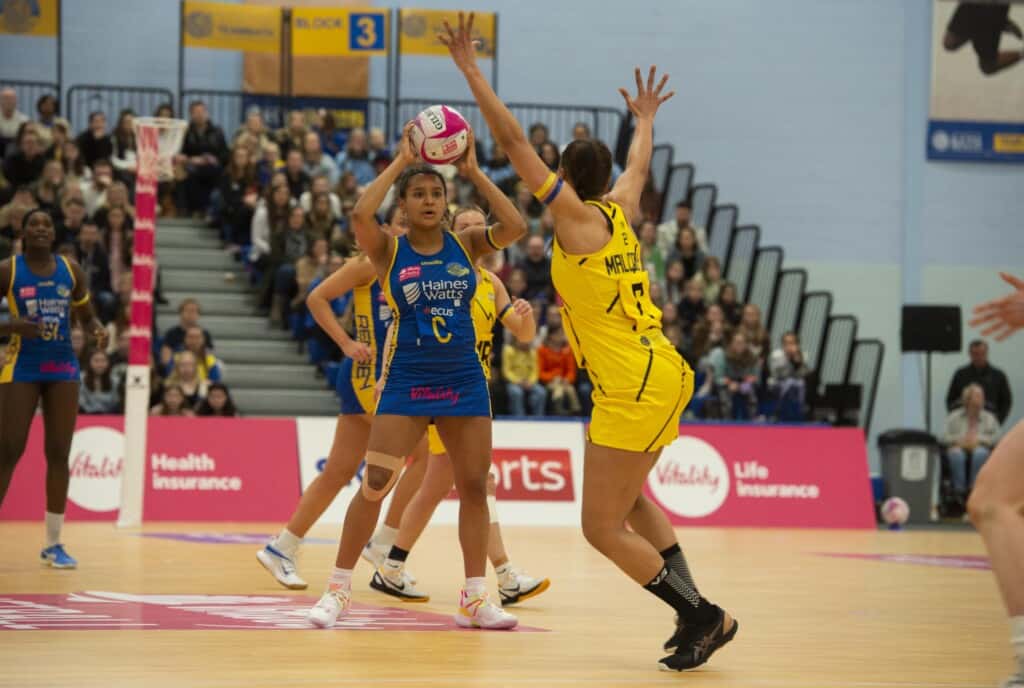 Allison and Manchester Thunder’s Malcolm tangled in Round 6 and will compete for a Roses bib (image: Clare Green)

“It’s going to be an interesting decision for Jess and the coaching team around that centre bib,” said Stembridge.

“You’ve got a number of athletes putting their hands up as well as Imogen, you’ve got someone like Laura [Malcolm] who can play across all three positions.

“I believe Imogen can offer Jess something different.

“She has a natural ability in attack and where we need to make the biggest gains with her in position is what she does defensively.

“If we can accelerate that learning in this season, she’ll be in a really strong position. You’ve got people like Jade who have the experience but it’s about what points of difference you can offer.

“If Jess needs to mix it up in that Championship. Imogen’s got a really good chance.”

Watch Off the Court every week on the VNSL YouTube channel, where you can also see match highlights, features and interviews.