With her smallest fans watching on from the side lines, Sophia Candappa is thrilled to be back on court and is showing her children that their mumma can still bring it on court.

On Monday, Surrey Storm made it back-to-back wins with victory over Wasps, it was also a third consecutive win at Surrey Sports Park in the process.

After racing out of the blocks, Storm took an early advantage but Wasps came back and set up a tense final quarter.

In the end, decisive turnovers from Leah Middleton, key feeds from Yasmin Parsons – included in Pamela Cookey’s team of the week – and sharp shooting from the league’s top scorer, Proscovia Peace, saw the hosts home.

Candappa came on in the second half and brought a sense of calm to Storm’s attacking end, contributing a solid 15 feeds.

“We’ve been working really hard in training on that composure, being patient with the ball and resetting,” Candappa explained after the game.

“I think that resilience is going to be very important as we move forward into the second half of the season.”

For the first time since swapping back black and gold to the familiar duck egg blue of Storm, Monday Night Netball was an extra special occasion for the former Wasps captain.

“I had butterflies all day. It was an exciting prospect to come out against my old side but I was pretty nervous as well. When you know so much about each other it makes that even more exciting.

“It was a really tough game. There were moments during where it was goal-for-goal but I’m really proud of the team where they showed their composure to stay in it and play a really big last quarter.”

Storm could not wish to have anyone better in their shooting circle this season. Topping the scoring charts with 431 goals with an almost unrivalled goal percentage of 95%, Proscovia Peace is proving to be a handful for her Superleague rivals and Candappa is an awe of the shooter’s star quality.

“I absolutely love playing with her – she’s awesome!

“She’s the most amazing person off the court and then on the court. I can just turn and launch the ball and 99% of the time she’s going to get it. She’s so exciting to watch.

“She’s got flair, she can move, she can hold – it’s just great to have her back in the league and even better that she’s on my team!”

It's surely an amazing thing to see that we are normalizing motherhood in netball & other sports .Little bit of cuteness brightens the day 😃 . Shout out all mothers in sports .#strongwomen pic.twitter.com/SsfGYH0cLf

In October 2021, Candappa welcomed her daughter, Wren, into the world, just two years after she had her first-born, son Otis.

During both periods of her pregnancies, Candappa has been part of two Vitality Netball Superleague franchises and both have offered her and her family much welcomed support.

“Both of them were amazing. When I was with Wasps and we were playing up in Wakefield, that was challenging in terms of leaving Otis at home and having to travel a lot, but they were really supportive with how much travelling I was doing and they made sure I wasn’t overtired and that I was managing my load.

“Since I’ve come to Storm, Mikki and the team have been incredible.

“Wren comes with me to every game, my mum comes, I have my own changing room – all those small things make a massive difference. It makes my gameday experience as stress-free as possible.

“It’s not a normal matchday preparation to have your five-month-old baby in the changing room with you but the girls and the team love Wren. They’ve just accepted me and my family and I really value that. Storm is all about family.”

Candappa believes the Superleague has made great strides in being a welcoming competition for mothers returning to the game and her hope is to see this replicated across women’s sport.

“I’m a massive advocate for the fact that women can still be elite athletes and mothers.

“In the past that’s not been the case and that support and infrastructure hasn’t been there, but we’ve now got maternity policies built into contracts and there’s much better understanding of how to support mums returning to court in terms of the physical adaptations that have to happen.

“Pregnancy takes a great toll on your body and there’s more resources and knowledge around returning to play which is great and franchises are getting on board with that. And why not? Why should we not be able to get back and play? Dads can go and continue playing when they have their families and so should us mums.” 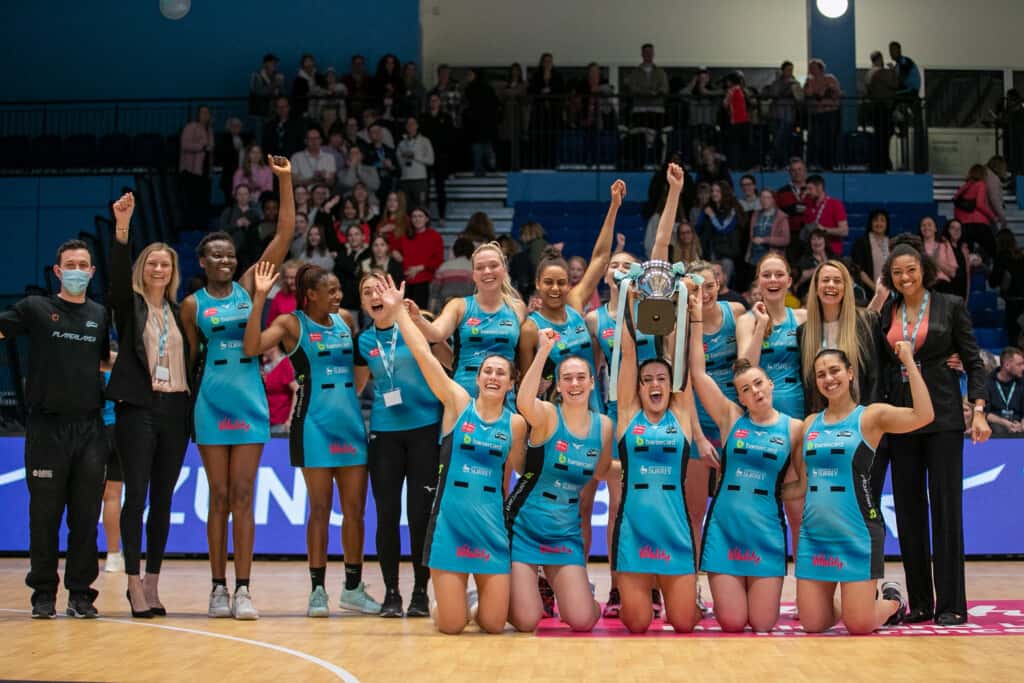 Whilst the 29-year-old admits that she is now at the latter end of her career, Candappa is embracing the role that she has in the team whilst continuing to play with flair and stay true to her game which we at Superleague HQ love!

“I’ve been around for a while now and I’ve got a lot of experience in the league. I think being able to come on at half time, having watched the game for a bit, I feel like I can make a real impact.

“When I came to Storm, I really wanted to bring my experience but also that flair and my different style of play – I’m not like most standard wing attacks.

“I think some players can be a bit hesitant on the ball and be fearful of making errors but I’ve always been a big believer in ‘if you’ve got the skills, go for it!'”

Up next and targets

Candappa and Storm head out on the road for their next test in the Vitality Netball Superleague, taking on Celtic Dragons at the Sport Wales National Centre on Monday night followed by Severn Stars on Sunday 3 April on Sky Sports.

With Storm in full flow, these next two games could help propel the Surrey outfit into the top four mix and Candappa believes her side is capable of that and possibly more.

“If you get into the top four anything can happen. We’ve got a big second half of the season coming up.

“The first half was all about sussing each other out – figuring out game plans – and the second half of the season is about nailing it and putting out those performances. We’ve shown we can do that in various quarters against various top teams. We’ve got to do that consistently now over four quarters in each game.”