Pulse have made the Copper Box into a fortress this season (Image: Morgan Harlow)

With only three games in the round, it wasn’t quite the headline-filled round we were anticipating, but there was more than enough VNSL action to keep us occupied this weekend.

We have now played 10 of the 20 rounds of the regular season which means the race is on for the top four and Grand Final weekend in June.

Here’s what we learned from the Superleague weekend.

When we checked in with Tamsin Greenway to preview Monday’s big game at the top of the Superleague table – the Scottish Thistles head coach suggested Thunder might want it just a bit more than Loughborough Lightning.

It wasn’t a reflection on Lightning – the defending champions no less – more a measure of where Thunder are in their journey.

Karen Greig’s team obliged in a cracking contest, winning 61-66 at a sold out Sir David Wallace Arena to extend their lead at the top of the table to six points and stay perfect with 10 wins from 10 games.

It's that time again! 🕙@tamsingreenway back with her brilliant touch screen analysis of the first half 💯 🏐 pic.twitter.com/4kY4frHZw1

Nothing is decided at this stage of the season, but we like to learn lessons here at Superleague Towers.

Lightning will know where they need to improve, and the they have the options to make those adjustments. They next go head-to-head in Round 20, the final round of regular season games.

However the biggest thing we learned is that big players make their mark. Thunder have been tested over the last two weeks, first against Pulse in Round 9 and then again against Loughborough on Monday.

All three players could play for any team in the world, that they play for Thunder is what has them as Grand Final favourites at the halfway point.

A run of home games gave London Pulse the chance to build some momentum, two games over the last seven days have underlined their credentials as not only top four hopefuls but even title contenders.

Sam Bird’s talented young squad have won all five home games to climb to a franchise high third in the VNSL table. They headed out on the road to face Manchester Thunder and Leeds Rhinos in Rounds 9 and 10 and will have learned an awful lot about themselves.

Having pushed Thunder closer than anyone with a 51-48 defeat at Belle Vue, Pulse will have already been feeling good about themselves before a dominant 58-44 win over Leeds Rhinos gave them a seventh win of the season.

At the end of it all, Pulse remain third in the table and have a six point advantage over the three teams immediately below them.

Up next it’s Loughborough Lightning, back at the Copper Box in what looks like being the stand-out game in Round 10 – Pulse can draw level with Lightning with victory.

A win in that game, against the defending champions who will be hurting after their first defeat of the season, and their three-game run against semi-finalists from 2021 will have shown Bird they are ready for the push over the second half of the season.

Dragons and Storm serve up a thriller

Sliding under the radar for some, but not for us working away at Superleague HQ was a thrilling contest in Cardiff that brought the VNSL weekend to a dramatic conclusion.

At the end of it all, Surrey Storm emerged victorious, a one-goal victory enough to take them to 15 points, level with Leeds Rhinos and Saracens Mavericks and very much in the top four conversation.

A last second offensive contact called against Georgia Rowe ended Dragons hopes of pinching a draw in a roller-coaster contest that saw both teams have their moments – good and bad. 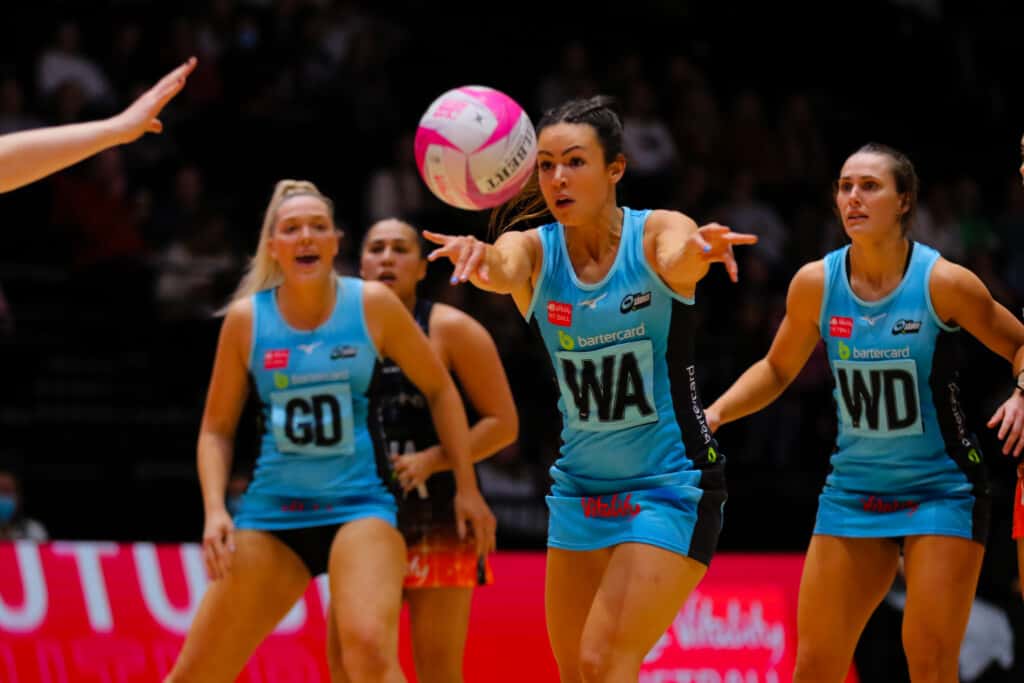 It is now three wins in a row for Storm, and up next a Severn Stars team that have lost their last eight. Mikki Austin’s squad is gelling nicely and a return to the top four for the first time since 2016 is within sight.

For Dragons it was a welcome return to the form they were showing before their opening win of the season. A start of five successive defeats did not tell the full story for Dannii Titmuss-Morris team who finally got a win their performances deserved with they beat Stars.

Rather than kick on, they lost their way in defeats to Wasps, Bath and Sirens but a nerve shredding win should give them renewed belief as they prepare for a tough run against top four contenders.

Team Bath have been battling against everything this season, injuries, illness and the surprise retirement of England captain Serena Guthrie.

They’ll hope to be able to focus on netball this weekend when they return to action on Saturday against Strathclyde Sirens in Glasgow.

Head coach Anna Stembridge spoke to Off the Court last week and was full of praise for how her team have responded to adversity this season. They remain very much in the mix for the top four but need wins.

More importantly they are chasing consistency of results and of selection.

They haven’t been able to do much about the latter as they deal with Covid cases, but with players returning they’ll hope to address the form issues that means last year’s beaten Grand Finalists have yet to win back-to-back games this season

After consecutive defeats they face Sirens, Surrey Storm and London Pulse in a nine-day period that could be crucial to their top four hopes.