The Vitality Netball Superleague returned to the full compliment of six games at the weekend, giving ballers twice the drama to pore over.

Nine rounds remain and the ‘Spring Showdown’ is looming large – where two games in two days at Resorts World Birmingham will set the tone for teams down the stretch.

But for now, here’s what we learned from the Superleague weekend.

Lightning walked into the eye of the storm at fortress Copper Box on Saturday, confronting one of the best home records in the league on the back of a spirit-sapping loss to leaders Thunder.

Victoria Burgess’s side shed their unwanted tag of slow starters and kept the London Pulse home crowd quiet with a searing first quarter.

Having been outscored in the first quarter of their previous three games, Lightning poured on 20 points in the first stanza to Pulse’s paltry six, breaking the back of the contest.

A thumping 20-point triumph wasn’t without cost, however, as Nat Panagarry hobbled off early on.

Hannah Williams deputised in the centre bib for the quick turnaround Monday Night clash against Rhinos that yielded another win, keeping Thunder’s lead at the summit at three points.

With such resilience and depth in their ranks, make no mistake about the East Midlands side’s title credentials.

Finger on the Pulse

You can’t take your eyes off the race for fourth place, with a quartet of teams still in the hunt.

But London Pulse still look good to keep hold of third despite a tough loss to Lightning, their first on home soil all season.

Funmi Fadoju’s late withdrawal due to injury was a hammer blow – there are few players in the league that are better to watch in full flight. 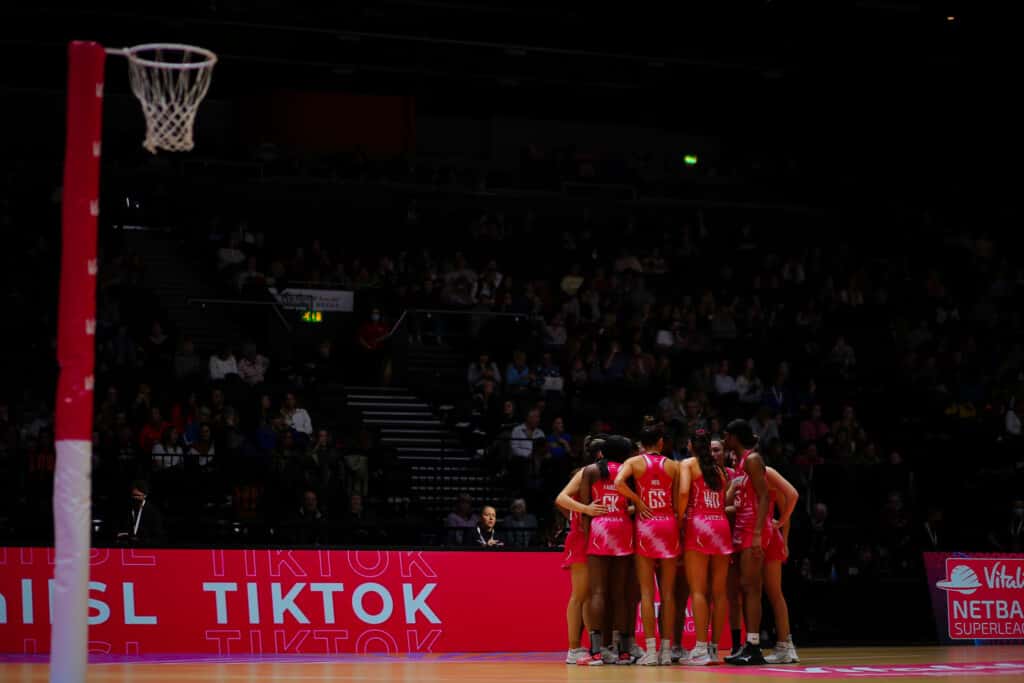 Pulse’s statement that Funmi’s injury had been ‘caught early’ was reason to be cheerful and Lindsay Keable gives them a solid platform to build on at the defensive end.

There is no easy game in the Superleague but the second half of the season looks, on paper, to have been fairly kind to Sam Bird’s outfit.

Play-Off contenders Bath will be buoyant coming into Round 12 but with neither of the top two to navigate between now and the end of the season, expect to see them in the top four.

Bath back on even keel

Team Bath have a great blend of youth and experience – they have just struggled to get it all on the court at the same time this term.

The five-time champions are one of the quartet jousting for fourth and they have all the tools to make it. Despite a turbulent season, a sixth title isn’t yet out of the question.

After two losses on the trot and a Covid postponement, Anna Stembridge’s team reminded the Superleague that they haven’t gone anywhere in a 57-40 win over Strathclyde Sirens.

With Rachel Shaw, Kirsty Harris and Jessica Shaw all reaching double figures in terms of feeds – and skipper Imogen Allison dishing eight – they have a variety of routes into the danger zone.

A crop of exciting youngsters will be better having been thrown in at the deep end and should give the south-west side extra freshness down the stretch.

The Friday night clash with Storm promises to be an absolute barnstormer in a crackling atmosphere at Surrey Sports Park.

A lack of consistency has been the bugbear for Mikki Austin and Surrey Storm, who have long felt like Superleague’s perennial underachievers.

The tide is turning, though, and they are the form side in the league having won their last four games. In Round 11, they downed the dangerous Severn Stars 68-52.

The key to the game would always be how long Cat Tuivaiti could play for and how quiet Storm could keep the Kiwi.

She was a perfect 25 from 25 but Leah Middleton turned over ball eight times and Proscovia Peace converting those moments into goals would prove match-defining.

With Sophia Candappa also a shooting option for Storm, prepare for a battle royale on Friday night with Phumza Maweni and Layla Guscouth out to stop them.

The value of a new signing doesn’t always just lie in the quality of what you bring in – but in what the power of competition hauls out of existing talent.

Silver Fern Temalisi Fakahokotau’s arrival at Saracens Mavericks caused a sensation and ripples were felt around the league.

But it was her new defensive colleagues Razia Quashie and Jodie Gibson who grabbed the headlines in Round 11 and laid the platform for a convincing 62-43 win over Wasps.

Gibson made five interceptions and produced four turnovers – with Quashie also contributing four of each – as Wasps were strangled in the shooting circle.

Gezelle Allison’s introduction in the second quarter played into the home side’s hands and the sisterhood of Kadeena and Sasha Corbin combined for 36 feeds, capping a superb display.