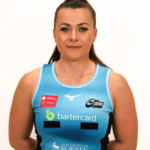 London Pulse secure win over visitors Surrey Storm in Round 7 of the season.

Surrey Storm took the opening centre pass and also turned over London Pulse's centre pass to start the game. Funmi Fadoju, on the other hand, puts pressure on Proscovia Peace's shot and grabs the rebound. London Pulse put up a lot of defensive pressure, but they couldn't turn it into a goal, as Surrey Storm went up 2-0 in the opening three minutes. After 5 minutes, Oliva Tchine scores a London Pulse verse goal, bringing the score to 3-1.

The first quarter was extremely defensive, but it seemed like Surrey Storm were getting the best of London Pulse, as Storm lead 8-3. Lindsay Keable and Funmi Fadoju putting on a pile of pressure while getting critical tip from 6'4 Peace. The attack were still trying to settle into this attacking combo as another ball is forced into Tchine, who is unable to get her hands on it.
Tchine and Dekker's relationship started to improve in the final few minutes. Dekker's confidence in threading the needle to Tchine after she double-dogded the GK was incredible.
12-11 to Pulse in Q1

Q2
London Pulse found their form in the second quarter.
Fadoju comes up with the intercept for pulse, which allows Tchine to put another one for Pulse. 15-12 to Pulse
Storm defence were unable to stop the Pulse attack, and they took advantage of every chance with two hands. 19-16. Fadoju and Keable were successfully applying significant pressure to Storm, causing a held ball.
There was 6 minutes left in this quarter, and Pulse has all of the momentum. A 3 seconds call prevents pulse from expanding the gap to 5, but this has no effect on pulse.
28-24 final quarter score.

Tayla Honey was moved to C and Alicia Scholes to WA in this quarter, and they already had an impact on the game by assisting Pulse with a three-goal run at the opening.
Sacha McDonald came on this quarter comfortably, scoring three of the four goals in the first few minutes. Again, Fadoju shows amazing hustle as she got a wonderful tip from Peace and chased down the ball before passing it to Everitt.
Keable applied tremendous defensive pressure as she came over the back of the storm GS and distributed the ball to her attackers. In the third quarter, Pulse defended tenaciously, winning 41-35.

A tremendous final quarter for London Pulse, as Ashleigh Dekker returns as WA. She was critical today in giving safe passes to Tchine.
To begin the third quarter, there was a great rebound by Pulse defence, which they were able to capitalise on, however as the ball was going down court, Surrey Storm were forced to make a change due to an injury to Emma Magee, who has been such a vital player for Storm this game. Frankie Wells enters the heated close game prepared.

The Pulse attack didn't let the stoppage of time to phase them, as there is a triple play between McDonald and Tchine. Jasmin Odeogberin replaces Fadoju at GD. This defensive combination causes a held ball by Surrey storm. 9 goal difference.

Surrey Storm increased their pressure and caused issues for this Pulse squad at the end of the final quarter, although this had little effect on Pulse players who secured the win by 6 goals.

You can watch the highlights from all the games in the VNSL 2022 season HERE. Buy tickets to support London Pulse at their home games here and support Surrey Storm at their home ground by buying tickets here.