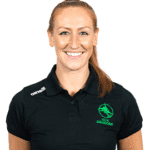 Celtic Dragons registered their first win of the Vitality Netball Superleague season after coming out on top in the bottom of the table clash with Severn Stars on Monday Night Netball.

Both teams came into the game on the back of five consecutive defeats apiece after tricky starts to their seasons, making this game very much a must win.

But it was Dragons who dominated and prevailed, winning three of the four quarters to run out 58-42 winners, recording their first win since April 2021.

With a much needed three points on the line, the game got off to a blistering start. It was the visitors who took an early advantage with Gilbert Player of the Match, Annabel Roddy starting as she meant to go on, making a couple of key turnovers whilst Georgia Rowe and Lefebre Rademan looked sharp in the shooting circle and by the end of the first quarter Dragons had a six-point lead.

In need of some stability, Stars Head Coach Melissa Bessell turned to her bench and changed the defence, bringing Nicole Humphrys into WD and Dee Bolakoro in at GD to face her former side. Unfortunately for the hosts, little changed as the two sides tied the second quarter to give Dragons a 29-23 lead at half-time.

After the restart it was Dragons who really spread their wings. Shona O’Dwyer and Clare Jones worked hard in the middle feeding the ball quickly through to Rowe and Rademan who capitalised on their opportunities. The hosts were unable to reply and playing their second game in three days, the fatigue became more evident as they struggled to seek out Paige Reed in the shooter bib and find any attacking rhythm.

Dragons took full advantage and took hold of the game, winning the quarter 16-7 and taking their lead into double figures.

The Green Army hold on

With the game almost out of sight, the Dragons kept their composure and saw out the final quarter. Stars tried to close the score but the combination of Roddy, Shaquanda Greene-Noel and Leila Thomas proved hard to break down.

Commenting after her first win as head coach, Dannii Titmus-Morris said: “I’m very happy, relieved and proud. It feels like everything is coming together.