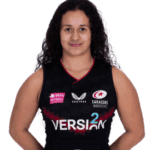 Sirens ended a run of defeats with an impressive victory over Mavericks [Image: Ben Lumley]

The Strathclyde Sirens were back in front of their home crowd as they faced Saracens Mavericks, in what was set to be a closely contested match.

The game did not disappoint with both teams putting up a fight, but it was Sirens who came out on top as they defeated Mavericks 57-50.

Both sides came out with a point to prove and eager to put some more points on the board. Mavericks started strong but Towera Vinkhumbo from Sirens was determined to steal ball early, racking up the intercepts in the opening minutes.

Sirens were showing patients with the ball, working it around their attacking third until they found their shooters under the post. Bethan Goodwin started with confidence, backing herself in from distance which lifted the whole team. Mavericks began to settle and were able to get ahead as the opening quarter came to a close, leading 13-11.

The second quarter was underway with both teams battling it out on court. Mavericks managed to maintain their lead as the game went goal for goal until Taylor McKevitt came away with a huge intercept which boosted the whole team.

Sirens were able to bring the score back to a draw off the back of a strong defensive effort and consistent shooting from both Niamh McCall and Goodwin.

For the first time in the game Sirens were ahead by 1 goal and just before the whistle went for halftime, they slotted another away, leading Mavericks 26-24. In what was a closely contested first half, both teams came out firing with Siren’s captain, Gia Abernethy, putting on a dominant performance in at centre. Goodwin held strongly under the post, making it easier for the Sirens attackers to feed into the circle.

The 15 minutes kicked off as Sirens looked to push ahead and secure the win. McKevitt was a stand-out in defence, showing great athleticism and determination.

The whole team seemed to be playing with confidence and were smooth in their transition from defence to attack, thanks to Vinkhumbo and Emily Nicholl for winning lots of ball, providing their team with countless opportunities to convert. The game came to an end with Niamh McCall sinking the final shot on the buzzer and Strathclyde Sirens were back to winning ways, defeating Saracens Mavericks, 57-50.

You can also watch the highlights from all the games in the VNSL 2022 season HERE. Buy tickets to support Strathclyde Sirens at their home games here and support Saracens Mavericks at their home ground by buying tickets here.