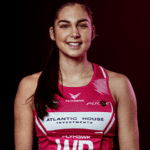 Jasmin Odeogberin came off the bench to help Pulse beat Sirens in Round 18. Photo: Ben Lumley

London Pulse secured a top four spot with a 57-41 victory over Strathclyde Sirens in a hard-fought match at Emirates Arena.

The visitors came out the blocks firing, leading 5-0 in the opening minutes. Sirens struggled to settle against a strong Pulse defence that slowly built as the first quarter progressed.

A long bomb from Niamh McCall lifted the packed-out Emirates and Sirens were determined to put up a fight. But Pulse were patient with the ball, working it around in their attacking third only for Taylor McKevitt to come away with an intercept which was rewarded down the other end.

After an intense first 15 minutes Sirens managed to find their flow but Pulse leapt into a seven-point lead. Sam Bird's side kicked off the second quarter with 2 consecutive goals, extending their lead out to 9. Sirens were working hard, showing patience in their transition from defence to attack, managing to pull it back to a four-goal differential.

Sirens were building throughout the quarter and thanks to an intercept from Towera Vinkhumbo, they pulled it back within 2. Sirens' captain Gia Abernethy was solid in both defence and attack, leading by example and constantly cheering her team on.

After a strong fight back from Sirens, Pulse were still out in front, 23-29.

The second half was underway, and Sirens brought Kelly Boyle into wing attack, hoping to challenge the Pulse defenders. Kelly Boyle injected herself into the game immediately, getting an intercept and sending it down to Niamh McCall who slotted it away.

Pulse were clinical with the ball, treasuring possession and working it into their shooters seamlessly. Sirens introduced Emma Barrie in at goal shooter who was strong under the post.

A tip from McKevitt which was mopped up by Vinkhumbo as the Emirates Arena erupted, the hosts roared on by the Sirens Tribe. Pulse extended their lead heading into the last 15 minutes to 41-29.

With 15 minutes left on the clock, Sirens needed to dig deep to try and draw the score back. They brought Beth Dix back onto the court as well as Abby Tyrrell into goalkeeper. The team worked hard defensively to try and win back ball for their shooters to convert.

Pulse, however, were ruthless in defence and were quick on transition to attack that proved the foundation for victory.

You can also watch the highlights from all the games in the VNSL 2022 season HERE. Buy tickets to support Strathclyde Sirens at their home games here and support London Pulse at their home ground by buying tickets here.