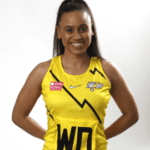 Back in Belle Vue, big crowds were keen to see Manchester Thunder continue their undefeated run against a struggling Severn Stars and they were not disappointed.

Thunder came out stronger with each quarter, notching up a huge 78 goals to Stars' 53.

There was no horsing round from the team, as the game was moved to 6pm to accommodate the world-famous Grand National. The race only seemed to hype up the crowd even more as when the teams ran on court, the screams roared, and phone torches danced amongst the stalls.

What seemed to be a relatively close first quarter, Thunder managed to force some errors then use every one of Stars' mistakes to change the flow of the game and increase their lead to 17-12 by the end of the first.

Stars shooter Cathrine Tuivaiti seemed to be taking on our defence on her own and began a small revolution, netting a few balls to close the gap slightly but after a
quick team change that saw Eleanor Cardwell come on, Thunder upped the tempo, charging at full capacity and leading 39-23.

Speaking to head coach Karen Greig at half-time, it seemed she was happy with their performance: “Centre pass to goal has been excellent, around 88%, so we want to keep that ‘clinicalness’ going into the 3rd quarter. And again defensively, keep that defensive line with Yas and Shadine was excellent with their centre pass defence.

"Mixing it up in the third so hopefully it’ll have the same impact.”

With both Goal Keeper Kerry Almond and Goal Defense Shadine van der Merwe each grabbing five intercepts and turnovers throughout the game, they certainly managed to continue Greig's aims in the second half.

Thunder even managed to get one last turnover whilst the crowd counted down the last 10 ten seconds of the game, converting one last goal with a wonder shot from Cardwell.

Thunder have managed to beat Stars with +25 goals both games this season and nothing seems to be slowing them down.

You can also watch the highlights from all the games in the VNSL 2022 season HERE. Buy tickets to support Manchester Thunder at their home games here and support Severn Stars at their home ground by buying tickets here.