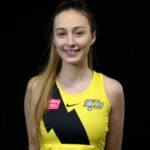 Severn Stars were unable to come away with the victory against 2019 Superleague Champions, Manchester Thunder, in their first home game of the season.

Despite a spirited effort, which kept Stars in constant touch with the champions, Stars’ defence struggled against the strength and control of the Thunder shooters.

Thunder displayed their class right from the first whistle at the University of Worcester Arena, with their midcourt players finding goal shooter Eleanor Cardwell under the post with ease. Severn Stars goal shooter Georgia Rowe was given close attention and marking by Thunder, but goal-attack Paige Reed kept the Stars scoreboard ticking over with some impressive long-range shots.

At 3-8 down, Nia Jones, at wing defence, marshalled the defence into a better structure for Stars, a joint franchise between the University of Worcester and University of Gloucestershire.  The team began to use short passes and give and go to bring the ball to the circle edge, resulting in more accurate feeds to Rowe. A bit of magic in a fantastic offload from Reed to Rowe and a disallowed goal for Manchester Thunder saw Stars recover to end the first quarter down by one, 13-14.

Thunder made changes at centre in the second quarter, bringing on Northern Ireland International O’Hanlon, while Herdman entered the game for the home side at goal attack. Indecisive play from both teams saw the ball change ends and there were tumbles to the floor as players from both teams refused to give an inch. However, Stars were unable to make all their shots and Thunder were able to pull their lead out to four, 26-30.

At half-time, both teams made full use of their squads with a number of changes. There was more impressive long-range shooting from Reed, but mishandling ball errors higher up the court allowed Thunder to keep their lead. But Stars’ wing attack, Liana Leota began to find Rowe under the post with ease and Stars finished the quarter strongly, at 43-46 to Thunder.

In the final quarter, Thunder made attacking changes which paid dividend. Stars struggled to convert their own centre passes, as their midcourt looked to find a way through the Thunder defence. Turnovers from Stars’ defenders Ama Agbeze and Nia Jones brought the score back to within six with six minutes to go.  However, Stars had left themselves too much to do. Thunder’s goal shooter Joyce Mvula stepped up again, helping Thunder take the lead back out to a safe distance, finishing 56-65.

For tickets for Severn Stars next home game, visit www.severnstars.co.uk.