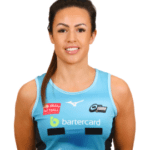 Surrey Storm recovered from back-to-back defeats to seal a 42-34 victory over Celtic Dragons, who remain winless in the 2021 Vitality Netball Superleague.

Buoyed by a far improved display against Strathclyde Sirens, Dragons went into their game against Storm with plenty to feel positive about as the franchise looked for their first win of the 2021 campaign.

It was not the ideal start as a slip in the opposition circle gave Storm an early break of throw, but some patient work from Shona O’Dwyer allowed Amy Clinton to resume her hot streak in front of goal.

A long ranger from Rebekah Robinson saw the Jamaican international get on the scoresheet, but an unforced error on Dragons' centre pass saw Storm win a throw-in and extend their lead.

Despite these lapses, Dragons remained focused and Clinton made herself available around the circle edge and it was goal-for-goal up to the break. Celtic Dragons’ defence were unable to get anything out of the Storm shooters in the first quarter, so Tania Hoffman opted to bring on Leila Thomas at goal defence to mix things up.

A rare miss for Clinton gave Storm a platform from which to extend their lead, but Dragons defensive pressure eventually forced a turnover from the opposition. A wonderful interception from Christina Shaw at wing defence was just reward for a fantastic work-rate as the physicality of the match edged up.

Ultimately, Dragons were unable to capitalise on these moments of brilliance and Storm were able to protect their lead at half time.

It was a scruffy start to the second half for both sides, with Storm eventually drawing first blood courtesy of an interception right across court.

A rare miss from Storm’s Karyn Bailey was music to Dragons’ ears and Rebekah Robinson made it count. The defence had to tread carefully after Leila Thomas received a warning for a trip on Bailey, but the team in green were unperturbed with one of Thomas’ trademark leaps yielding a turnover.

Co-captain Sophie Morgan came on with fresh legs for Shona O’Dwyer as Dragons just about kept in touch with one quarter left to play.

Dragons’ defensive duo started the final quarter in fine form, but a lack of opportunities for Robinson and Clinton early in the period saw Dragons lose precious time on the clock as they suffered another loss.