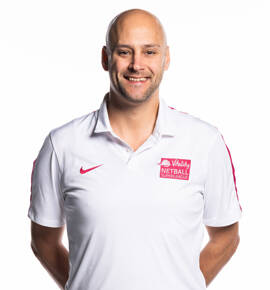 While I was a University I attended a number of Officiating courses to bolster my CV as a PE Teacher. I was talent identified by my County (Bedfordshire) which has a pedigree of producing world class umpires.

I have been involved in 3 World record matches, 2 for match attendance 18,000+ and I was one of the umpires for the longest international match on record. This was the final of the 2010 Commonwealth Games in Delhi and was a double overtime thriller. It is often regarded as one of if not the best Netball matches of all time.

I always set out my whistle bag and towel in a certain way and I also drink the same brand of sports drink. I always have an uneasy feeling.

I just want to continue to be the best umpire I can be. This does not mean I am striving to be the best umpire of a particular group in either Superleague or Internationally though. I am a strong believer in doing your best for yourself and the teams you umpire. This way if you do get selected for big matches it’s a bonus but if you don’t you know you couldn’t have given anymore.

Most definitely Sheelagh Redpath. She has been my mentor for nearly 20 years and is someone that is never scared to point out where I could’ve done better. The support I have received from Superleague and International Assessors over the years has also added different facets or tools to my Umpiring tool box.

I’m Still Standing by Elton John, but I really like to listen to live concert versions.

Two words… Tiger Pants! I recall Umpiring at the Commonwealth Hames and returning to the changing rooms after the match to hundreds of messages on social media. Unfortunately I had forgotten my white match pants and had to wear my black and orange striped ones. Again unfortunately the BBC felt the need to zoom in on these and the commentary team added to the embarrassment. Needless to say that’s one thing I always quadruple check I have with me!

I love being part of a team of fantastic individuals. I have made lifelong friendships as a result and this is something I am always thankful for. It’s also about having the privilege to work in high performance sport with all of our fantastically talented and hardworking athletes.

My go to advice has always been the same as what I was told by a former English International Umpire – to get on in this sport you will need to keep your head down and your mouth shut. I have added two things to this over time. Knowing the rules inside out prepares you for any eventuality. Most recently when considering Advantage, don’t focus on the infringement when considering playing Advantage. Look for the possible destination of the pass fractionally before as this will make playing advantage a lot more skilfully.