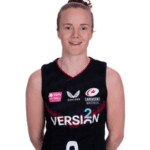 Day 2 of the opening weekend and Saracens Mavericks were set on backing up Saturday’s performance against a new look Celtic Dragons.

The second quarter saw Chloe Essam enter at GA for Saracens Mavericks, whilst Dragons remained unchanged. The black and reds struggled to find rhythm with dropped balls, wayward passing and disconnect that proved to be disruptive. Dragons took full advantage, making attacking interceptions and holding tight to their momentum swing with Rowe connecting sweetly with O’Dwyer, Rademan and Jones. The quarter swung to Dragons, leading to the half time score of 28-31.

Quarter 3 was set up to be a tasty affair with everything to play for. Momentum was sitting with Dragons but Saracens Mavericks are a team that can turn up the heat when stakes are high. Beth Ecuyer-Dale entered the game at centre and immediately bought a calm to the Mavericks side whilst Zaranyika came up with an early intercept for her side which was slotted away by Venter. Mavericks with the first 3 goals of the quarter and a roar from their South African GS gave the team the lift they needed to push on. A seven goal win of that quarter took Mavericks back into the lead with the quarter ending 46-42. Only one change made in the final quarter with Dragons resting Greene Noel for Thomas at GK.

Captain Corbin started to link brilliantly with Ecuyer Dale who’s speed, power and presence helped to lead her team into the final push of the quarter. Gibson and McCarthy had their work cut out for them in the Mavericks defensive end with the engine of Rademan never giving up & the execution of Rowe behind her making it very difficult to win ball. However, the back four built just enough pressure to take the win and the game finished 60-54 to the black and reds.

Kat Ratnapala said after the game: “It was great to finish the weekend off 2 from 2, we knew Dragons were going to be tough coming from the back of the Welsh International season. It definitely showed up some areas we are exposed and also some real positives that we’ll push on with for our next round”.