New Manchester Thunder star Shadine van der Merwe moved to the North-West for one primary reason: trophies – and Thunder are off and running in perfect style.

The 29-year-old, who played for South Africa in the 2018 Commonwealth Games and 2019 World Cup, joins 2021 third-place finishers Thunder after spending the last three seasons with Suncorp Super Netball side Adelaide Thunderbirds.

Having missed Thunder’s goal-laden winning start to the campaign in Birmingham, the defender cannot wait to experience the fabled Belle Vue crowd which hosts Surrey Storm on Saturday night.

“They’re very loud. I’m really looking forward to playing with the fans again, because lately, without the crowd, it’s a dead environment.

“When they create a good, positive vibe the players love that, because it just brings a different kind of energy and dynamic.

“They must come to every game, every match.”

This sentiment has been echoed by all in the Manchester Thunder camp who recently appealed to fans; “We need you”, urging supporters to get behind the city’s Superleague team.

Thunder’s players, coaches and directors are encouraging people to turn up and show their support with the return to home venues.

“I am so excited to have supporters back, to feel the buzz from the crowd and the energy that they bring. It’s so important that we have a full venue so, please, I implore you to get down to your local team and support us in the coming weeks.

Netball Is Home for the VNSL 2022. From players to management, the drive to see big crowds supporting and spectating the sport is huge.

“The most exciting part for me is being part of a team with a winning culture,” Van der Merwe added, explaining her decision to sign with Thunder.

“Knowing that they’ll go into semi-finals, but obviously it’s a lot of preparation getting there, so focusing on the process first before the end result.

“But I’m just excited for that winning culture and being in an environment where there’s a lot of competition amongst each other.”

Van der Merwe is one of several big names recruited in the off-season by Thunder head coach Karen Greig, who is set to lead a formidable side boasting numerous returning Vitality Roses.

Eleanor Cardwell, Laura Malcolm and Natalie Metcalf – also returning to the UK after her own three-year stint Down Under – will supplement a host of talented pathway players.

Thunder fans might better recognise Metcalf by her maiden name—the 29-year-old went by Natalie Haythornthwaite until her December wedding.

Good news #ThunderFamily, the legend that is @nataliesymone will be on court this Sat🥳
Rested & recovered from her injury at the #quadseries, Nat will return to #BelleVue for the 1st home game against @SurreyStorm. Will you be there to welcome her back?🤩https://t.co/Bhd9qbWzdr pic.twitter.com/nsidKynfeR

Metcalf, who has 56 caps for England, most recently vice-captained the Vitality Roses in January’s Quad Series at London’s Copper Box Arena.

Van der Merwe only landed in the UK three weeks ago, so she can be forgiven for not having done much exploring in her adopted home.

“There’s still a lot to see in Manchester,” she confesses.

“But I’m still excited to hang around and explore more. They say it’s a very grey area but I think lately it’s been quite good weather, and the sun has come out, so that’s good!

“Luckily I’ve got a good housemate.”

The Pretoria native, as it turns out, has moved in with Thunder team-mate Joyce Mvula, the Malawi international who finished behind Loughborough Lightning’s Mary Cholhok for overall goals leader last season.

Van der Merwe added: “We’re staying in a nice house, it’s easy to get to training and the gym, so I’m really loving it.

“I’ve been settling in, finding new spots for good coffee shops, I’m a bit of a coffee snob.”

Thunder’s second-place finish in the regular season clinched them a Finals Day berth but the squad ultimately came up short, falling to Team Bath by three points in their semi-final before beating Leeds Rhinos to claim third. 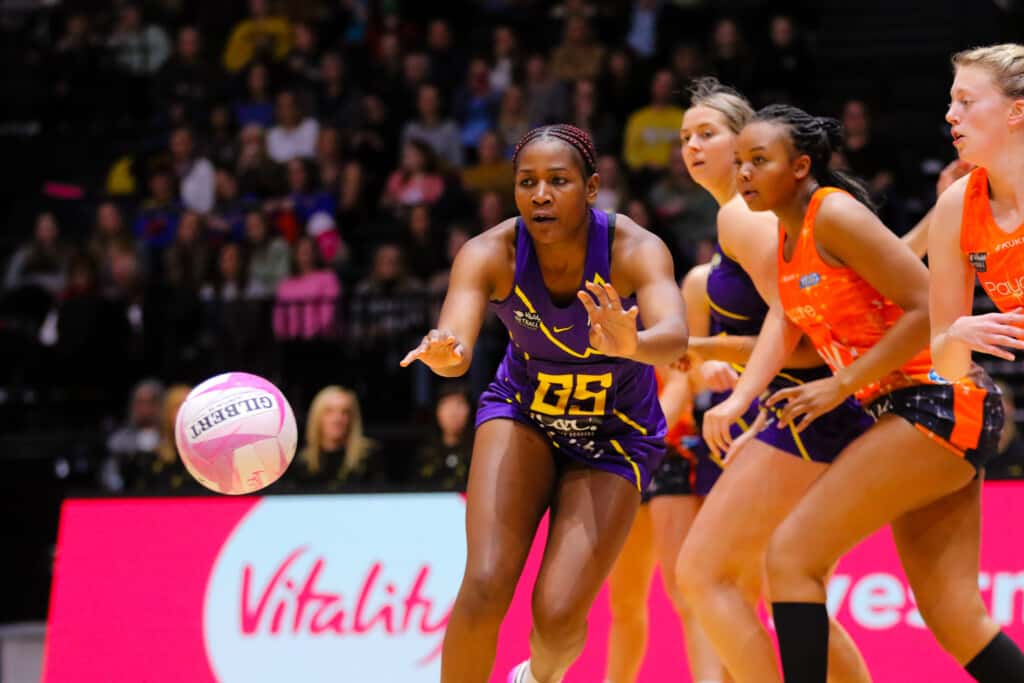 The boisterous reputation of the Thunder faithful has stuck with Van der Merwe ever since her first Superleague stint, so she urged local supporters and the netball-curious alike to pack the stands for her debut.

Thunder managing director Debbie Hallas is hoping to see Belle Vue packed as people continue to adjust to the news world we live in.

Echoing the thoughts of franchises up and down the country, she issued a rallying call for supporters to play their part.

“The world has changed so much over the past two years so I completely appreciate people might worry about coming back to an indoor venue to watch live sport,” she told the Thunder website.

“We have done everything we can to make the venue as safe as possible and I can promise a brilliant experience of live sport and entertainment.

“We make the majority of our money from ticket sales so not being able to have games at home has had a huge impact on us as a team and a business. With more attention on women’s sport than ever, and the Commonwealth Games just months away where netball will play a huge part, we need to get fans back to ensure we have a strong future.

“My message to everyone – whether you’re a Thunder fan or not, a netball nut or not – please come down to Belle Vue, watch a match and enjoy the experience. You’ll get a warm, safe and secure welcome and I am sure you will want to return.”

You can buy tickets to support Thunder’s home games at Belle Vue here and secure tickets to all 11 VNSL team’s home fixtures here.

Manchester Thunder VNSL 2022
Previous Story Vitality Netball Superleague 2022: Round 3 predictions
Next Story Team Bath determined to show resilience in tonight’s VNSL match despite being hit by a mix of injury and illness