There is just one day of the group stages of the Commonwealth Games left and it will be a feast of netball.

All 12 teams will be in action on Thursday and there will be Vitality Netball Superleague representation in all but the first match.

Those games will have a vital say in who can finish where, so we’ve crunched the numbers and these are all the possible outcomes remaining after day six.

South Africa can sew up third against Scotland

Wales held South Africa to 12 goals apiece after the first quarter before the Proteas pulled away to open 10-point lead at half-time.

The gap was stretched to 21 with a quarter to go but Wales finished in style outdoing South Africa with 19 goals to 16.

It sees South Africa sit in third place with four points, ahead of Wales and Scotland who have one victory each.

Scotland got those first points on the board today, defeating Barbados 72-28, thanks in part to a sparkling second quarter where the Thistles netted 24 goals to seven.

Strathclyde Sirens’ duo Beth Goodwin and Niamh McCall were both successful in 88% of their attempts on goal while clubmate Emily Nicholl put in a game-high four intercepts as goal defence.

They put up 72 goals against Barbados 👏 pic.twitter.com/CAzQ1dviNi

It means that South Africa and Scotland will be battling it out for the third place in Pool A at 7pm tomorrow, but Scotland would need an unlikely 87-goal swing, while Wales could still yet have a say.

Alongside Barbados in Pool A, Trinidad & Tobago and Northern Ireland have the chance to earn their first win of these Commonwealth Games when they face each other in their final Pool B match at 2pm tomorrow.

Northern Ireland struggled to get into their contest against Uganda eventually slipping to a 63-26 defeat, as Loughborough Lightning’s Mary Cholhok scored 46 of Uganda’s goals.

Meanwhile Trinidad & Tobago were beaten 70-30 by Malawi in the final match of the night as Strathclyde Sirens’ Towera Vinkhumbo put in five intercepts. 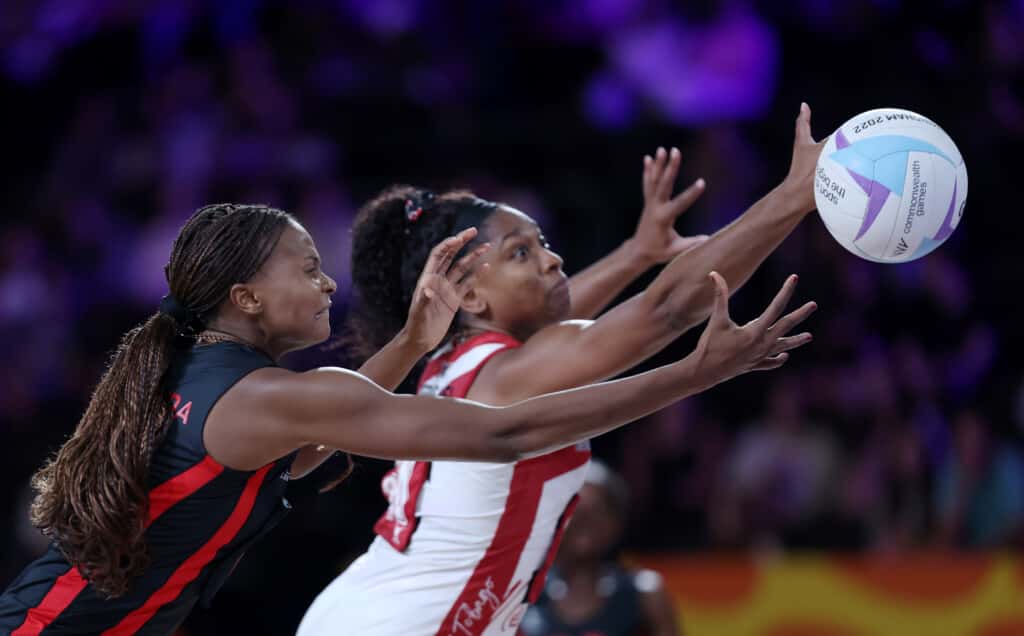 And while the Warriors and the Calypso Girls will meet to decide who is Pool B’s representative in the ninth-place play-off, their conquerors Malawi and Uganda will battle it out for third place in the pool.

The loser of that match could potentially come up against Wales, who currently sit in fifth but depending on the nature of Scotland’s result could move up to third or fourth in Pool A when they take on Barbados at 11am.

Semi-final opponents still to be decided

Going into the final day of group games, the semi-finalists have been confirmed with Australia and Jamaica advancing from Pool A and reigning champions England and New Zealand coming through Pool B.

What is yet to be decided is who will face who, but by 10:30am tomorrow we will know who has topped Pool A when Australia and Jamaica will have gone head-to-head.

There will then be a 12-hour wait to confirm their opponents with England and New Zealand’s centre pass taking place at 9pm.

It really is all to play for.