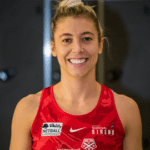 =Strathclyde Sirens went into Round 4 with plenty to be confident about following last weeks win against Celtic Dragons.

Having lost to London Pulse at the Season Opener in 2020 by two goals, both teams were fired up to take away the win today.

Both Strathclyde Sirens and London Pulse pressed the pedal from the first whistle, with tight one-on-one marking making both teams work hard for every single ball.

It was a goal-for-goal quarter with Cullen and Nicholl working hard to keep Thomas and Rothwell at bay, and we laid our eyes on some more brilliant combinations between Abernethy, McCleery and Goodwin at the circle edge.

Basic errors started to creep in, with numerous footwork calls been issued during critical times in play however Sirens managed to stretch the lead to four heading into the second half, 20-16.

The Sirens line-up remained unchanged whilst Pulse made changes at both ends in the second half. Barrie and Goodwin had to work a little harder to find a space following the introduction of Keable and Fadoju in the circle, but the Scottish side maintained their composure enjoying a nine-goal lead heading into the final quarter.

Quarter Four saw Pulse capitalise on Sirens errors, but Cullen and Vinkhumbo put in a shift to turnover ball and stop the London side from narrowing the gap further.

Princes Square Player of the Match Nicola McCleery said: "We knew it was going to be tight game and that it was going to go quarter by quarter. This is the first time we’ve won three in a row so we’re absolutely delighted to be going home with the win today.

"Training is going really well at the moment and we’re setting the standard there which is now showing through our on court performances."

Karen Atkinson said: "We had to work hard to break this team down as they have a lot of talented and tactical players. Nicola did an amazing job to think about her game against Fadoju and her angles to get herself to the circle.

"The squad are growing in confidence and belief but we just need to keep putting the foot down, understand that we’re doing well and be able to repeat that under pressure and adapt where required. We’re learning but it’s not a bad start to the season!"