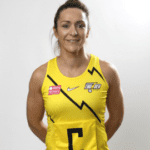 Manchester Thunder made it eleven wins from eleven games, maintaining their six point lead at the top of the table after claiming their second win over Celtic Dragons this season.

The game begins with both teams getting the ball to their shooters with ease. The Vitality Netball Superleague GK of the round Shaquanda Greene-Noel flew across the court to get the tip followed by the pick-up. The ball moved through to the Dragons attack, but Shona O’Dwyer struggled to find options and the ball is intercepted by Metcalf. Both teams managed to settle after a period errors as the game turns goal-for-goal. But a string of errors from Dragons were capitalized on by Thunder as they claimed a six goal lead.

Thunder made some changes going into the second quarter. Millie sanders entered the court at goal defence, moving Shadine van der Merwe to wing defence whilst Laura Malcolm went to centre, sending Caroline O’Hanlon to the bench. On the first centre pass, Dragons showed good patience as they worked the ball into the circle to score. Tips from Laura Rudland and Shaquanda Greene-Noel gave Dragons possession, but they couldn't convert. The Trinidad and Tobago goal keeper got another tip and followed it up with the pickup, but again, Dragons couldn't seem to convert their possession gained. Thunder drew the score back out to 10 goals with a smooth shot from Cardwell as they contested every ball, making it hard for Dragons to find a way to goal. But Dragons showed they could step up their defensive pressure as they stopped Thunder from getting the ball in easily to Mvula.

After going goal-for-goal in the opening part of the third quarter, Greene-Noel ramped up the intensity and made a string of tips and intercepts, helping Dragons see the score reduce to seven goals. With six minutes to go, Thunder brought Roscoe on to the court to replace Sanders and a huge ball in from Malcolm in the centre third to Cardwell in the shooting circle kept the score ticking over for Thunder. Greene-Noel finished the quarter off with another intercept increasing the pressure.

Thunder showed their versatility by making further changes. Van der Merwe returned to the GD position, playing against her South African team mate once again and it was Thunder’s defensive pressure which forced Dragons to make an error. Shona O’Dwyer returned to the court at centre, with Clare Jones taking the wing defence position as Nia Jones went to the bench. A flying intercept by Shona O’Dwyer and an offensive contact against Mvula, gave Dragons a big lift with limited time left on the clock. But Thunder’s Millie Sanders took a dive into the boardings and did well to keep the ball in play and help put score board pressure on Dragons as the visitors carried the momentum to the end, finishing the game with a nine goal win.

Celtic Dragons’ Laura Rudland is awarded the player of the match after a great performance.
Dragons play Saracens Mavericks away next match on Saturday 9th April. They then face Leeds Rhinos and Loughborough Lightning in the Spring Showdown on the 16th and 17th of April. Make sure you get your tickets now by clicking this link.

You can also watch the highlights from all the games in the VNSL 2022 season HERE. Buy tickets to support Celtic Dragons at their home games here and support Manchester Thunder at their home ground by buying tickets here.